There are a number of things you don’t want to hear a central banker say. One of those things just popped out of Janet Yellen’s mouth – “I don’t believe we will see another financial crisis in our lifetime.” That has to be up there with Irving Fisher’s deathless observation from 17 October 1929 that "Stock prices have reached what looks like a permanently high plateau" or John Maynard Keynes’ comparably adept forecast from 1927 that "We will not have any more crashes in our time."

So far, so anecdotal. How about some data to back up the thesis that, as Thorstein Polleit puts it, the super bubble is in trouble ?

First, define your Super Bubble. We can do this in two ways. One relates to longevity (how long has the bull run lasted ?), the other to valuation (how expensive is the market now ?). The global bond bull began back in 1981, when 30 year US Treasury yields peaked at 15.2%. Now, over 35 years later, long bond yields are below 3%. 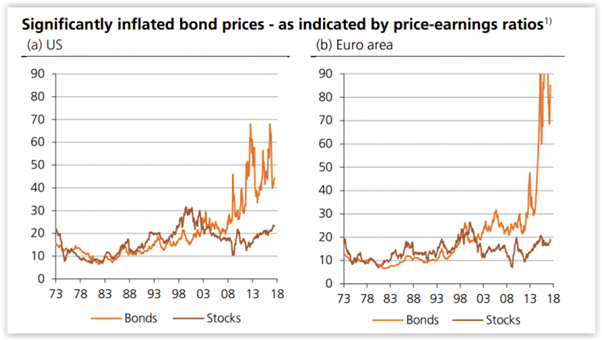 ¹For bonds, calculated as 1 divided by the 10 year government bond yield

You do not need to be a financial market wizard to see that especially bond markets have reached bubble territory: bond prices have become artificially inflated by central banks’ unprecedented monetary policies. For instance, the price-earnings-ratio for the US 10-year Treasury yield stands around 44, while the equivalent for the euro zone trades at 85. In other words, the investor has to wait 44 years (and 85 years, respectively) to recover the bonds’ purchasing price through coupon payments.

Meanwhile, however, the US Federal Reserve (Fed) keeps bringing up its borrowing rate; and even the European Central Bank (ECB) is now toying with the idea of putting an end to its expansionary policy sooner rather or later.

Those of us who are hostile to central planning are doubly hostile to governmental interference in the price mechanism, which is what the misguided policies of QE and ZIRP effectively are. The definitive text on this topic is Forty Centuries of Wage and Price Controls. Spoiler alert: government attempts to rig prices always fail, sometimes catastrophically.

The problem facing the likes of Janet Yellen, Mark Carney [makes sign of the cross and looks urgently for garlic] and Mario Draghi is that, having now weaponized short term lending rates, the nukes can’t be put back in their silos. How can interest rates be raised meaningfully above zero without crashing the financial system ? Perhaps they can’t. Perhaps unelected monetary bureaucrats should never have been allowed to take them there in the first place. But we are where we are. Any commentary surrounding monetary policy can now only echo that tired old joke about the lost traveller who, when seeking advice, is told that he shouldn’t start from here.

Tim Price is Director of Investment at PFP Wealth Management and co-manager of the VT Price Value Portfolio.

Tim Price is Director of Investment at PFP Wealth Management and co-manager of the ...

Those of us who are hostile to central planning are doubly hostile to governmental interference in the price...