Bank of Canada Raises Rates for First Time in 7 Years It may be minor, but it should be just enough for the Bank of Canada's Stephen Poloz to cut them again when things start to get tough, and the 2.8% growth vanishes just as quickly as it was envisioned.

Of course, higher borrowing costs are just what the doctor ordered. Often disparaged as the flawed “hangover theory” by Keynesians who believe consumption equals wealth creation, the idea that we’ve been on an unsustainable economic path, fuelled by low-interest rates, is about as outside the mainstream as you can get. 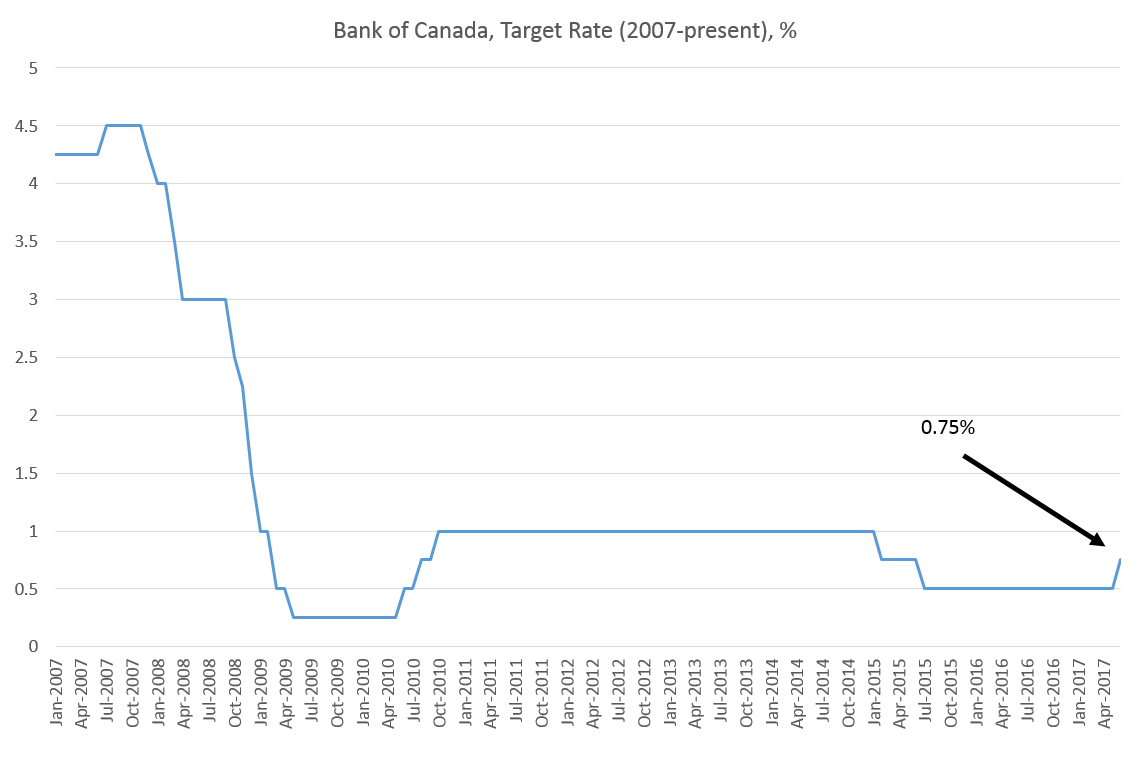 But as the popularity of Mises grows faster than the 2.8% economy, the “hangover theory,” or, rather, the Austrian business cycle theory, will be harder and harder to suppress and ignore. Especially as the truth of its statements outperform the lies of the Keynesian doctrine.

That said, moving up a one-quarter of a percentage point from 0.50% to 0.75% isn’t as earth-shattering as, say, moving the rate up to 2.75%. While the latter may bankrupt a good number of Canadians, the decision would cease punishing savers and allow the painful but necessary correction and restructuring of the economy to commence.

But as Stephen Poloz himself has said, “When you’re looking at making an investment that you think will make you 20 percent or more over the next 12 months, and you have to borrow the money to make that investment, is a quarter point or a half a point (in extra interest) going to make a difference?”

So the rate “hike” was not an attempt to get household debt under control but actually a consequence of a robust economy that has been fuelled by household spending.

Leave it to the central bank to confuse and ignore the causal-realist tradition in economics. Nowadays the bankers in charge just run data through a computer and make decisions based on that. But as Murray Rothbard points out, if economists can predict future trends then why are they wasting their time “putting out newsletters or doing consulting when he himself could be making trillions of dollars in the stock and commodity markets?”

Household spending isn’t growing the economy. A rate hike is just giving the Bank some room to cut rates again when the financial house of cards starts to sway in the wind.

This is the first overnight rate increase since August 2010 when Mark Carney was leading the central bank. Poloz took over in 2013 and cut rates twice in 2015 due to the slow-down caused by crude oil prices.

For the second time in less than two months, the Bank of Canada has raised interest rates.

Bank of Canada Raises Rates for First Time in 7 Years

It may be minor, but this week's rate hike should be just high enough so the Bank of Canada can cut them again when...