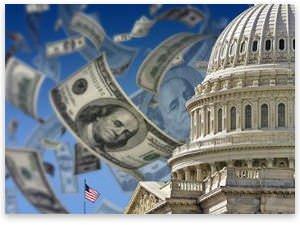 04/20/2011Murray N. Rothbard
"In bypassing Congress in this way, the American public has shown that it realizes only too well that Congress has been the major culprit in budget deficits."

[From the Libertarian Review, May 1979, Rothbard provides a well-rounded discussion of the strengths and weaknesses of a balanced-budget amendment and assesses the significance of the movement that was pushing the idea.]

The libertarian antitax, antispending organization, the National Taxpayers Union, has been toiling in the vineyards of the state legislatures for years, getting one after another to pass a proposed constitutional amendment to require the federal government to balance its budget. Last year and this, in the wake of the great mass upsurge of antitax, anti-inflation, and antigovernment sentiment across the country, state after state has passed this amendment, until now 29 out of the required 34 have endorsed the idea. The NTU — and the media — expect that the amendment will pass the required 34 states this year. What stand should the libertarian movement and the Libertarian Party take on this amendment?

First, we should realize that the balanced-budget amendment is a genuine mass movement, overwhelmingly supported by the bulk of the people in this country, regardless of income group, occupation, party label, or self-proclaimed status as "liberal" or "conservative." Let us look at the overwhelming consensus of the most recent polls. Gallup gives the results as 81 percent for the amendment, 11 percent against; CBS-New York Times makes it 70 percent pro, 17 percent against. The ABC Harris poll makes the amendment a 3 to 1 winner: 69 to 23 percent. Associated Press-NBC is even more conclusive at 4 to 1: 75 percent pro to 16 percent against.

So we have a genuine, overwhelming mass movement, led by an authentically libertarian organization. Before we repudiate or fail to go along with such a movement, we must think hard and long. Not only that: the instinct of the public in supporting the amendment is sound as a bell. The public is not only rising up against our chronic and aggravated inflation, but it has finally, and at long last, identified federal deficit spending as having something vital to do with that inflation. This insight of the masses must be encouraged, not repudiated.

Secondly, the public, in its wrath, is courageously taking up a never-before-used clause of the Constitution. The usual procedure, of course, has been to pressure Congress to pass an amendment which the state legislatures must then ratify. In bypassing Congress in this way, the American public has shown that it realizes only too well that Congress has been the major culprit in budget deficits. If Congress has been so conspicuously a crucial part of the problem, how can we wait for it to be part of the solution? In its willingness to use a previously unheralded part of the Constitution, Americans are showing themselves willing to be radical, to use legal but unorthodox procedures to bypass the State. Our presumption, then, must be to support and endorse the balanced-budget amendment. What are the arguments against it?

All these points (2–4) are important correctives. They must be pushed by libertarians, pointing out to our allies on this issue that the balanced-budget amendment, however worthy, will not serve as a panacea for the federal budget or for inflation.

But this does not mean that we should fail to support or even oppose the balanced-budget amendment. It simply means that, while calling enthusiastically for its passage, we should point out to the other advocates, as well as the public, the various loopholes and snags that the Establishment could use to scuttle or discredit the amendment.

Our best course while pushing for the amendment is to point out the problems, and to call for further statutes or amendments to solve them: e.g., by imposing sharp federal-income-tax cuts or by restricting the power of the Fed to purchase assets and thereby to "print" money. In short, we must support the balanced-budget amendment, and at the same time call for pressing further to effect deep slashes in the pernicious federal income tax as well as to eliminate the Federal Reserve's power to inflate the money supply.

So let us support and welcome the libertarian instincts of the public on this issue, and call for correction by pushing them further, ever further, on the road to liberty.