Oxfam, the leftwing NGO devoted to poverty relief has released a new report blaming poverty in wealth inequality. In other words, its central claim is that the existence of very wealthy people creates poverty.

The report is largely just an extended op-ed that asserts that the existence of some very wealthy people is the cause of poverty in the world. Notable buzzwords and phrases include "trickle down," "obscene levels of inequality," and "neoliberalism."

The "solution" to the alleged problem, which should surprise no one, is a list of taxes that should be either introduced or raised significantly, including higher income taxes, "a tax on financial transactions," a "global wealth tax," and a so-called "anonymous wealth tax."

These taxes, we are told, will put an end to the poverty-causing inequality that now is a global crisis.

But there's a problem for Oxfam in this data. The report never actually demonstrates that inequality causes poverty, or how it does it. It does claim that many wealthy people are getting richer faster than poor people. As Marketwatch sums up:

Even this statement is questionable, as Felix Salmon points out at Fusion. The way the report calculates wealth has a tenuous relationship with reality:

The result is that if you use Oxfam’s methodology, my niece, with 50 cents in pocket money, has more wealth than the bottom 40% of the world’s population combined. As do I, and as do you, most likely, assuming your net worth is positive. You don’t need to find eight super-wealthy billionaires to arrive at a shocking wealth statistic; you can take just about anybody.

[I]f you put 30 dollars into your bank account, does it mean that you caused extreme poverty for 10% of the world population? This is what Oxfam is implying in its biased pseudo-economic analysis.

But, let's just a for minute accept Oxfam's central claim that the rich are getting rich faster than the poor. This in itself tells us something. It used to be that we were told "the rich get richer while the poor get poorer."

Note, however that Oxfam does not claim this. They can't claim this because the poor are not getting poorer.

In fact, the the global poor have more access to basic necessities and wealth than ever before.

Global Poverty Is In Decline

But, as this data shows, global poverty has been declining for decades: 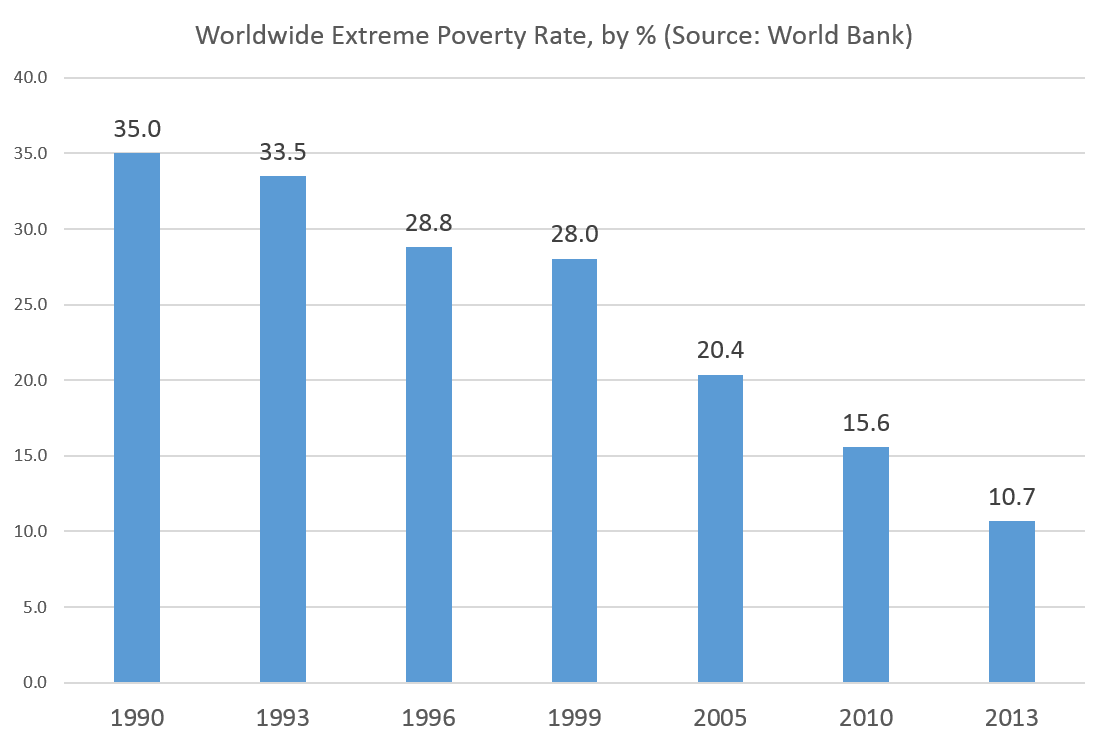 Moreover, given that "extreme poverty" as defined by the World Bank no longer even exists in the wealthy "global north," this is really a measure of poverty in places like South Asia and Africa and Latin America.

But what about more tangible issues such as hunger and starvation? Well, that's been falling significantly as well in recent decades. According to data from the the UN's Food and Agriculture Organization, we find: 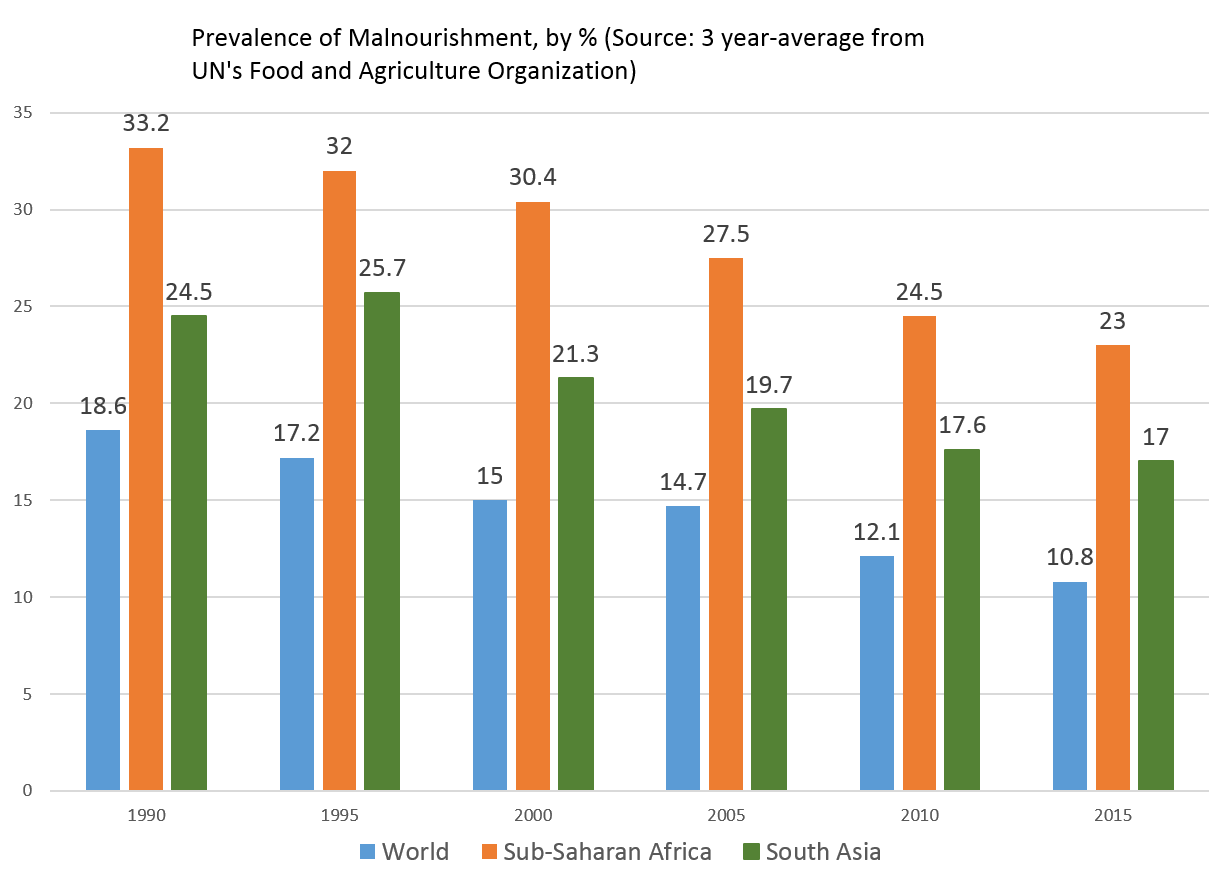 In this case, I've included data for South Asia (which includes places like India and Bangladesh) and Sub-Saharan Africa for comparison. Note that in all cases, malnourishment is in decline.

On a related note, we might also look to access to clean water and sanitation. After all, water-borne disease is one of the worst afflictions still faced by people in the poorest parts of the world. Here too, there has been progress: 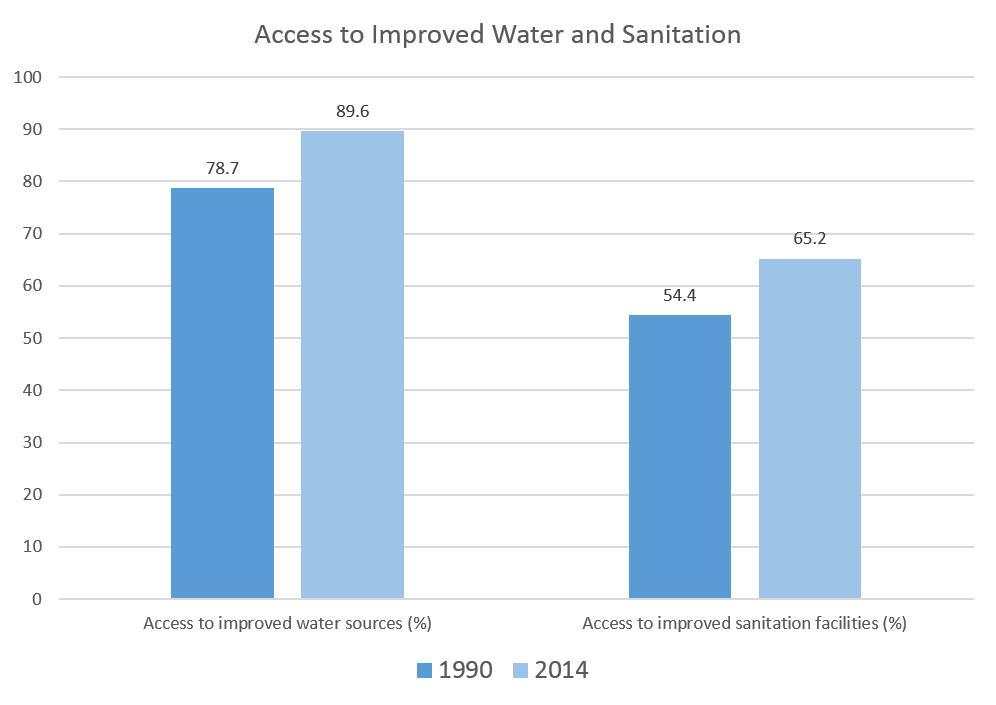 But, as any parent knows, infant mortality is one of the most noticeable and important measures of well-being. Fortunately, this is one of the areas where the most progress has been made, as we can see: 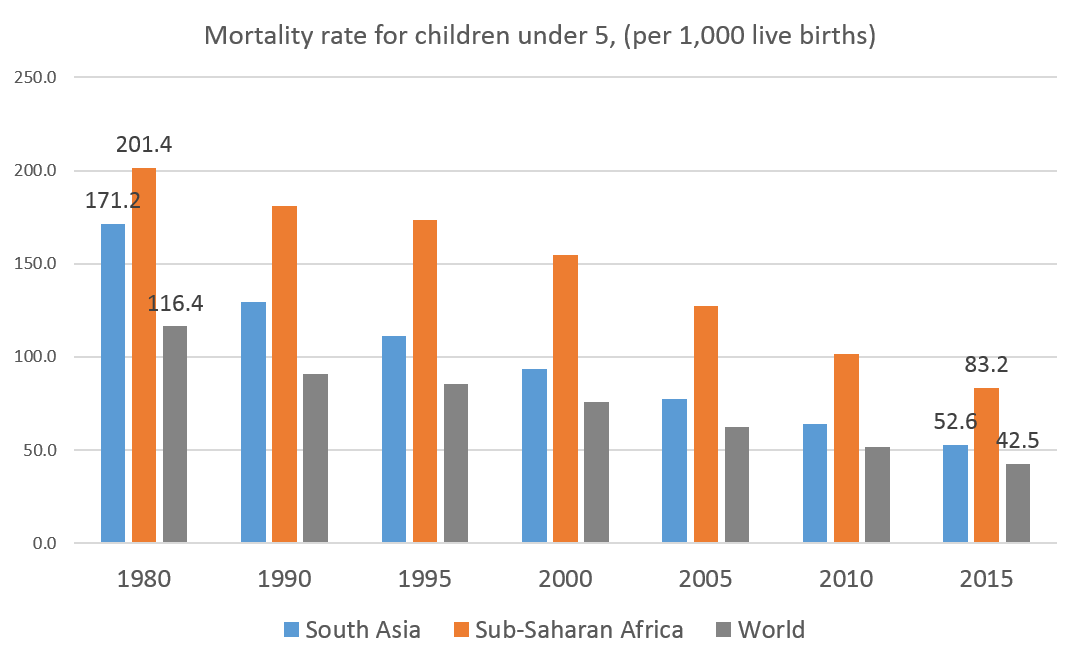 But merely avoiding death is never enough. How about education? Well, world literacy rates are rising: 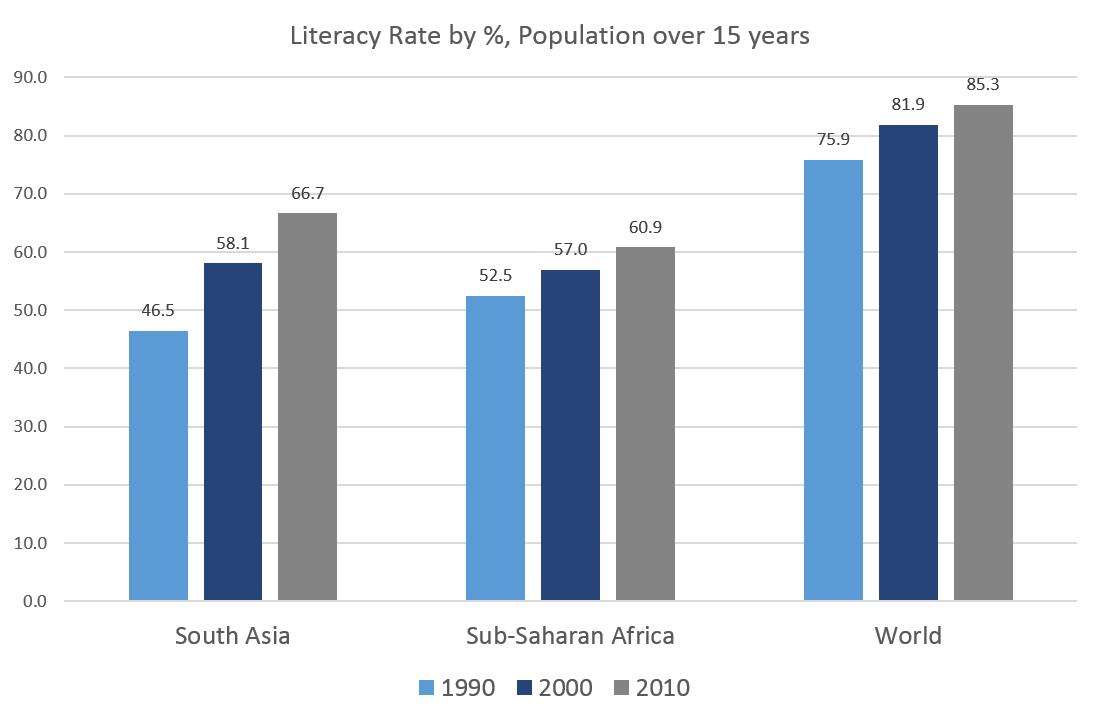 The Oxfam report, of course, ignores all of this. When the Oxfam report says that certain groups are "worse off," what they really mean is that people in those demographic or socio-economic groups tend to be improving their situation more slowly than people in other groups. "Worse off" most certainly does not mean "worse now compared to 20 years ago."

Our Enemy, the Markets

But, Oxfam has identified who is at fault for the fact that many people aren't getting rich as quickly as we'd like. The group they have identified is, not surprisingly, the "neoliberals."

As we've noted here before, "neoliberal" is an amorphous term that has been applied to everyone from Janet Yellen to Ludwig von Mises. Neoliberalis should not be confused with advocates for free-markets. Nevertheless, some neoliberals do indeed engage in limited advocacy for markets. From the left's perspective, however, the primary problem with the neoliberals is not their many deviations from free-market economics — a support for central banks chief among these deviations. The problem with neoliberals, we are told, is their limited pro-market rhetoric. Thus, we see time and time again that any reform that moves in the direction of less government regulation or more freedom in markets is denounced as "neoliberal." "Neoliberal" is in many cases simply code for "libertarian."

To its credit, the report spends a few short paragraphs on the problem of "crony capitalism," noting that:

Since 1990, there has been a big increase in billionaire wealth that has been derived from industries with very close relationships to governments, such as construction and mining. This is particularly true in the developing world, but is also an important factor in the rich world.

The report neglects to note that this has been especially true in the wealthy West in the financial sector. The marriage between huge banks and central banks has been an enormous source of crony capitalism in the West and has helped to enrich the wealthiest through the money-creation mechanisms at central banks.

But, as we might expect, the problem of the wealthy using political power to enrich themselves is not solved by reducing the power of political institutions. No, when the wealthy abuse the power of the state, the solution is to make the state more powerful! How exactly this will then prevent from the wealthy from abusing the state's even-greater power remains unanswered.

"Just raise taxes" is the moral of the Oxfam story. "You can trust us and our friends in government."

There's No Causal Relationship Between Inequality and Poverty

Ultimately, the Oxfam report is little more than a demand for higher taxes. It does not show how inequality causes poverty, and it resorts to abusing language by implying that people become "worse off" when someone else becomes better off faster.

Carefully ignoring the fact that the global spread of markets in recent decades has coincided with enormous declines in poverty, the report focuses on inequality, without ever demonstrating why it's so bad.

This, however, is where arguments about inequality almost always end up: the fight against inequality becomes an end in itself because it cannot be shown that inequality is an obstacle to reducing poverty.

If every person in the world had access to clean, safe housing, clean food and water, basic health care, and reading materials for education, wouldn't we consider this a great victory for mankind? After all, a dry room to sleep in and enough food to eat was regarded as something of a utopian fantasy in the 19th century in the West. Since then, the West, of course, has already far surpassed this and the rest of the world is moving in the same direction.

But, Oxfam would have you believe that these victories would mean nothing if there are rich people out there somewhere who own a yacht, or have a home theater system, or own a luxury car. Whether or not the poor are gaining access to basic necessities mean nothing to them so long as other people are buying luxuries.

Their "solution" is simply to redistribute wealth from the wealthiest to the poorest — after governments take their cut, of course.

But this solution assumes that wealth creation would continue at the same pace once massive new redistribution schemes are put in place. Would large corporations continue to employ as many people or pay dividends to as many investors — many of whom are hardly billionaires themselves — were the wealth of those organizations redistributed? That is hardly a given. Workers would almost certainly find themselves with fewer options.

Not surprisingly, the empirical data is clear that countries with more free trade, more wealth, and more freedom in markets are better places for the poor to live.

According to analysis from the Fraser Institute, we find that the lowest percentiles of earners make more in more economically free countries, and also possess a larger share of the wealth.

In more economically free countries, there is less poverty overall: 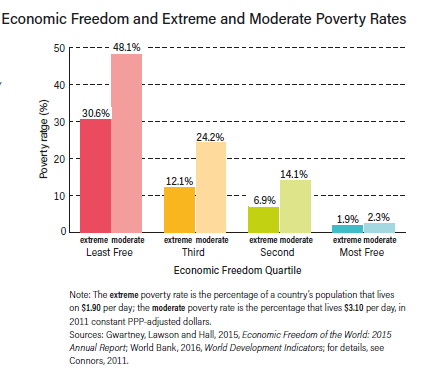 In more economically free countries, the poorest have more of the total share of wealth: 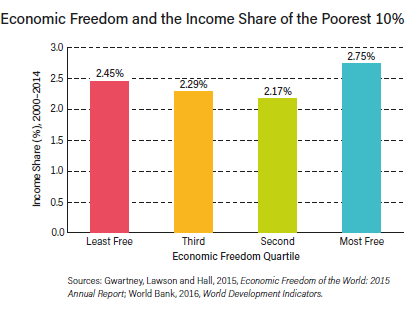 In more economically free countries, the poorest have more income: 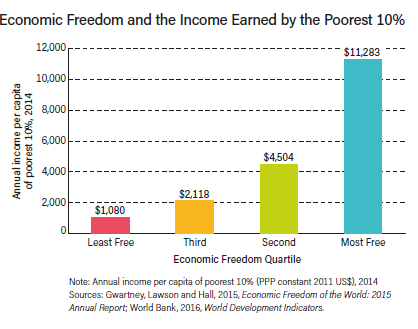 If we seek to make further gains against poverty, the solution is obvious.