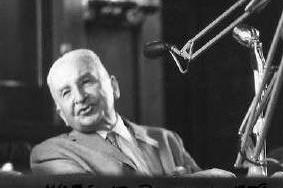 The Mont Pèlerin Society had begun as an "ecumenical" undertaking, bringing together purebred liberals of the classical tradition and neoliberals, who endorsed interventionist schemes to one degree or another. From the beginning, Mises had been skeptical about the ecumenical concept, but for the first five or six years his apprehensions seemed unwarranted, even though the organization of all Mont Pèlerin activities lay in the hands of a devout neoliberal: Albert Hunold from Switzerland, whom Mises had first met at the 1928 Zurich meeting of the Verein für Sozialpolitik.

An admirer of Road to Serfdom, Hunold had been among those who encouraged Hayek to convene the foundational meeting of the society at Mont Pèlerin, and he had also raised substantial funds for the event. At this meeting, the ambitious Hunold was elected secretary of the society, but after a few years he was no longer satisfied with his position under Hayek. His long-term goal was to become Mont Pèlerin Society president; his strategy was to make himself irreplaceable. He dealt with the smallest details of organization and by the mid-1950s started to handle correspondence without consulting Hayek, who resented these encroachments from a man he did not exactly love in the first place. After 1956, the conflict between the two men grew more intense and eventually came to a clash that brought the society to the verge of dissolution.

In the early years, this clash was barely visible. With the support of Hunold and others, the neoliberals steadily increased their numbers, but they did not dominate the society. The main reason was probably that, although Hunold had financial backing in the Swiss business community, he could not match the funds that were mobilized on the other side of the Atlantic. Hayek, Mises, and a few other classical liberals had a primordial impact on the selection of topics to be discussed. On the one hand, this was due to their scientific pedigree. On the other, they enjoyed substantial financial backing from the Volker Fund and from individuals such as Nymeyer, Grede, and Crane. At least until the end of 1953, the Volker Fund paid the membership fees, and often also covered travel expenditure, for virtually all non-US members of the Mont Pèlerin Society.1 And the Fund was eager to accommodate Mises's wishes (and probably Hayek's wishes also) when it came to securing financially the presence of certain members at the meetings. For example, when Mises declared that he would not attend the 1954 meeting in Venice, because of insufficient French and British participation, the Volker Fund asked him to handpick the beneficiaries of financial assistance in order of their relative importance2. At the end of that first phase of the history of the Mont Pèlerin Society, therefore, the leadership around Hayek was far more radically libertarian than most of the regular members — especially those from Europe.

The coexistence within the Mont Pèlerin Society of groups with such different orientations was well known by its members3. It was also fairly obvious even for newcomers. A case in point was Jean-Pierre Hamilius, a young professor of business and economics in Luxembourg, whom Mises knew through correspondence4. Hamilius had recently discovered the literature of classical liberalism, which he devoured and translated into French and German. Mises had him invited for the 1953 Mont Pèlerin Society meeting in Seelisberg5. Hamilius immediately noticed that the society was divided along the lines of ideological orientation and language into "different groups and clans." He himself felt closest affinities to the American group of Mises, Hayek, Hazlitt, Morley, Fertig, and Miller. From the other participants, who did not know that he had gotten his invitation through Mises, he heard reservations about "the old guard (Mises, Hayek, … )" who were sometimes called the "old conservatives." The young professor from Luxembourg was eagerly taking notes and discussing the interventionist schemes of various members who were not yet part of the old guard. Thus John van Sickle proposed taxing rich heirs, Wilhelm Röpke favored subsidies for homeowners, and Otto Veit argued that heavy taxation would not deter entrepreneurs from working.6 Ludwig Erhard, fresh from the victory of his party in the 1953 elections in Germany, also gave a talk at the meeting.

Hamilius's report shed light on the change of relative weights within the society that resulted from the apparent success of Ludwig Erhard's neoliberal policies in Germany, the so-called Wirtschaftswunder or economic miracle. To the socialists and social democrats who dominated the climate of mainstream economic opinion at the time, it was truly miraculous that the abolition of price controls and the transition from a centrally planned economy toward a market economy would yield substantial economic benefits. For unrepentant classical liberals such as Mises there was no miracle at all. But Erhard's success was problematic because it gave unwarranted credentials to his middle-of-the-road philosophy. This also applied to his closest advisers, who were often referred to as champions of the "social market economy" or leaders of the "Ordo School" of economics: his undersecretary of state Müller-Armack, and the professors Wilhelm Röpke (Geneva), Alexander Rüstow (Heidelberg), and Walter Eucken (Freiburg). In short, the success of Erhard's initial classical-liberal policies was used to vindicate subsequent interventionist policies, in particular, antitrust laws and inflation.

Even before the war, Mises did not have the highest opinion of most German economists. After his emigration, he had avoided any closer involvement with them. He would acknowledge Erhard's achievements by contributing to a Festschrift in Erhard's honor, but he declined to write an entry for the new standard social-science dictionary, the Handwörterbuch der Sozialwissenschaften; only after Gottfried Haberler pleaded the case of the editors did Mises agree to write a piece on "Economic Liberalism," a complement to Hayek's article on "Political Liberalism."7 And the prospect of cooperating with the fashionable Ordo School, be it in the Mont Pèlerin Society or elsewhere, did not exactly warm his heart either. He believed the Ordo people were hardly better than the socialists he had fought all his life. In fact, he eventually called them the "Ordo-interventionists."8 And his New York associates seem to have harbored essentially the same views — but without Mises's hesitation to express such views in print.

There were classical liberals in Germany who opposed the interventionist excesses of the Erhard ministry and the Ordo School. The leaders of this laissez-faire group were Volkmar Muthesius and Hans 9 Hellwig. But they could do no more than fight an honorable rear-guard action. Being denied professorships at the universities, their foremost means of action was Muthesius's journal, to which Mises contributed several articles. Hellwig wrote to Mises:

Men such as Erhard and maybe even more so Prof. Rüstow have strictly speaking not much to do with classical liberalism. Earlier classical liberals would have made no bones calling them social democrats. They would not have called them even social-liberals or socialists of the chair.10

I have no illusions about the true character of the politics and politicians of the "social market economy." [Erhard's teacher Franz Oppenheimer] taught more or less the New Frontier line of [President Kennedy's] Harvard consultants (Schlesinger, Galbraith, etc.)11

But because of the near total ignorance of foreign languages, Mises explained, the American public had a very unrealistic notion about what the German "social market" model stood for. The only issue of German politics included in the American debate was the monetary policy of the German central bank, which was much less inflationary than the policies of the US Federal Reserve. Thus the ruling class in Germany was perceived as devoted to classical-liberal principles such as sound money and international trade.

Erhard's success changed the Mont Pèlerin Society, sweeping in the very themes Mises had stressed should be excluded — such as the need for antitrust and the possible virtues of credit expansion. On both issues Mises sided with Volkmar Muthesius, who argued that the best way to combat monopolies was to abolish the policies and government institutions that created them in the first place. Mises was especially wary of yet another round of discussions of antitrust laws. In his youth he had witnessed the anticartel agitation that followed their rise in the 1890s. At the time, the debate had been propelled by the Verein für Socialpolitik, which was always seeking a new rationale for more interventionism. For decades now he had not come across new arguments on either side, and he expected that any debate in the Mont Pèlerin Society would quickly turn toward an interventionist agenda, rather than addressing the main case of present-day monopoly prices: the US price policies for agricultural products. It was probably due to his influence that the topic did not appear until the 1956 Mont Pèlerin Society meeting in Berlin, by which point many German professorial members had urged Hayek to set the monopoly question on the program. The issue could no longer be avoided.12

The meeting fully confirmed Mises's expectations.13 It turned out to be the overture for some five years of internal struggle for the Mont Pèlerin Society. A few months later, Hayek tried to mobilize his allies to attend the next meeting in Saint Moritz (1957), which he felt would be decisive for the future of the society, but to no avail.14 Personal tensions between Hayek and Hunold became obvious in the following year, which for the first time brought a Mont Pèlerin Society meeting to the United States — to Princeton.15

The Princeton meeting was positively memorable, however, in that Mises here delivered one of his last lectures to the Mont Pèlerin Society, on the subject of "Liberty and Property." The topic had been suggested by Hayek, who was desperate to organize something like a debate on fundamental questions among the members of the society. All his previous attempts had ended in a fiasco, as he himself recognized. But Mises rose to one of his last great public appearances. His talk survives as a tape recording and testifies to the fact that he was still at the height of his powers. The printed version of the lecture has remained one of the best concise expositions of the case for classical liberalism.16

During the next three years, the conflict between Hayek and his recalcitrant secretary lurked beneath the surface. Hayek could not get substantial support to oust Hunold. Most American members were on Hayek's side but feared that an open conflict would destroy the society. It eventually came to a showdown at the Kassel meeting in 1960.17 Both Hayek and Hunold stepped down from their positions, but Hunold would become vice president of the society and wreak havoc for a while longer. The 1961 meeting was to celebrate Mises's eightieth birthday, but Hunold turned it into yet another battle between neoliberalism and laissez-faire. The Ordoliberals would soon be pushed into the background for a while; the power vacuum was not to be filled with Austro-libertarians, but economists from the Chicago School.

Excerpted from Mises: The Last Knight of Liberalism.