GET NEWS AND ARTICLES IN YOUR INBOXPrint
A
A
Home | Mises Library | You Call That Austrian?

You Call That Austrian? 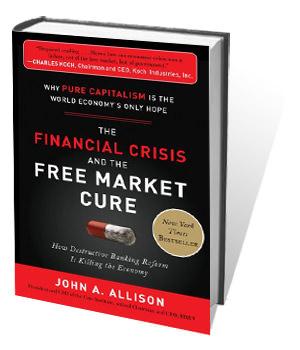 This book contains the oddest sentence I have ever read about the current financial crisis, or for that matter about any financial crisis. John Allison, President of the Cato Institute, writes,

I also thought of titling the book How the Critique of Pure Reason by Immanuel Kant (1783) Caused the Financial Crisis, but that was too obscure for most people, although it was more accurate, since Kant was the major philosophical opponent of reason who put an end to the Enlightenment century (1700s) that indelibly shaped the founding of the United States. (p. 255, n.3)

It is not enough that Kant lies at the origin of Nazism, as Leonard Peikoff so cogently demonstrated in Ominous Parallels. (It comes as no surprise that Allison admires this great contemporary thinker and scholar. "Leonard Peikoff's book Objectivism: The Philosophy of Ayn Rand enabled me to integrate Rand's philosophy and use it as a major competitive advantage for myself and for BB&T." [p. 277]) No, he also caused the recession of 2008! The way in which this machine gunner of the mind brought about the catastrophe is not altogether apparent. Perhaps, by weakening confidence in reason, Kant's destructionism made people blind to the errors of the inflationist doctrines that led to financial ruin. But were not inflationist and mercantilist policies popular long before Kant?

We fortunately do not need to try to clarify this less-than-transparent causal chain. Allison does not develop his intriguing remark any further. To the contrary, his main line of approach seems much more promising. He is a student of Austrian economics and proposes to use insights from that theory to analyze what has gone wrong since 2008. He is not only an extremely successful banker but, he tells us, an intellectual as well.

I have tried to personally exhibit the attributes necessary for life-long learning. Every month, I read a difficult book (typically one that was not directly-business-related) and referred the best books to our senior leadership team.… I particularly studied Austrian economics.… A deep understanding of the Austrian economic school is a tremendous competitive advantage in making long-term economic decisions. (You should read Human Action by Ludwig von Mises.) (p. 238)

One hesitates to challenge so learned a scholar — he reads a difficult book every month — but his knowledge of Austrian theory is not adequate to the task he has set himself. Although he mentions Mises and Hayek a few times, he never refers to anything they have to say on the business cycle. He says, e.g., "Ludwig von Mises proved the futility of central planning in his numerous books, including The Theory of Money and Credit (1913 [sic]), Socialism (1922), and Human Action (1940 [sic])." (p. 34) Very true, but in two of those books, Mises also discussed at some length the business cycle: why not address what he wrote?

The free-market economist and Nobel laureate Friedrich Hayek highlighted a concept he termed fatal conceit. This is the belief on the part of elitist intellectuals that they are smarter than the reality of markets. (p. 31)

If Allison were to look up the reason Hayek was awarded the Nobel Prize, he would find a reference to the "theory of money and economic fluctuations." Would it not have been a good idea for him to consult Hayek's relevant works on the subject? Of course Murray Rothbard is not mentioned at all: he is persona non grata at the Ayn Rand Institute.

Allison's neglect of the essential sources of Austrian business-cycle theory leads him into error. He rightly notes that the Fed's expansion of the money supply played the principal role in bringing on the financial crisis, but he misconceives the central issue. From him, the trouble lies mainly in the fact that the increased money supply fueled a bubble in the housing market. Instead of investing in capital goods, people foolishly sought to profit from speculative ventures in housing, a consumption good.

Allison does not mention that, according to Austrian theory, the expansion of bank credit temporarily upsets the balance between the gross market rate of interest and the "originary" rate, determined by people's rate of time preference. (If I am not mistaken, time preference is never mentioned in the book.)1 By upsetting this balance, the entire structure of production is distorted. Businesses use the expanded bank credit to invest in projects that cannot be sustained, given the existing stock of capital goods. In the book that Allison rightly recommends, Mises states,

However conditions may be, it is certain that no manipulations of the banks can provide the economic system with capital goods. What is needed for a sound expansion of production is additional capital goods, not money or fiduciary media. The boom is built on the sands of banknotes and deposits. It must collapse. (Human Action, Scholar's Edition. p. 559)

Perhaps, besides recommending the book to others, Allison ought to have studied it himself.

Though Allison does mention "misallocation of capital," for him this intricate process has to a great extent been reduced to trouble in one sector, albeit an important one, of the economy — the housing market:

The primary cause of the Great Recession was a massive malinvestment in residential real estate. We built too many houses, too large houses, and houses in the wrong places.… In other words, by investing too much in housing, we invested too little in manufacturing capacity, technology, education, agriculture, and other such areas. (pp. 9–10)

(Despite his talk of "malinvestment" here, it is clear that Allison considers buying a house spending on consumption.) It is entirely right that, in Austrian theory, the expansion of bank credit can cause a boom in consumption as well as production goods; and Mises was adamant that the Austrian view be characterized as a malinvestment, not an overinvestment, theory. It is going too far, though, to pass off an underinvestment view as Austrian.

Perhaps Allison would reply that he here is not endeavoring to expound Austrian theory: he instead disagrees with it. Would he not then owe us some account of what is wrong with Mises's position? He passes it by altogether. Though I cannot prove it, I suspect he is unaware that his view of the cycle differs from that of Mises.

Allison shows insufficient knowledge of Austrian work on another issue. He accepts Milton Friedman's claims that the Fed drastically contracted the supply of money after the onset of the Great Depression, in that way severely worsening conditions: "The evidence is clear that the early phase of the Great Depression was primarily a liquidity crisis, brought about by the Fed's arbitrary reduction in the money supply" (p. 70). He does not mention Murray Rothbard's criticism of this view; again, Rothbard must not be discussed or cited. If he disagrees with Rothbard, should he not have explained why? Again, I suspect that Allison is unaware of the controversy.

What has happened? Why has Allison written an ostensibly Austrian explanation of the financial crisis that displays so little acquaintance with Austrian theory? The answer may in part lie in a remark in the acknowledgments: "Richard Salsman assisted with a significant amount of research and provided most of the footnotes" (p. 278).

Ayn Rand asked, "Who is John Galt?" If, emulating her, we ask, "Who is Richard Salsman?," the answer lies ready at hand. He is an Objectivist economist who, incredibly, takes Mises to be an enemy of the free market. In an essay that appeared in The Abolition of Antitrust, edited by Gary Hull, Salsman said that Mises

never refuted the myth that capitalists, in his own words, "are merely parasites who pocket the dividends." For Mises, even entrepreneurs merely buy low and sell high as a passive service to consumers who, he claims, are the real drivers of the economy and profit. (Abolition of Antitrust, p. 45)2

When Allison sticks to topics that fall within his experience as a banker, such as the effects of Freddie and Fannie on the home-mortgage-lending business and the problems of fair-value accounting, his comments are often insightful; he is after all a distinguished banker of great experience. When he strays into Austrian theory, though, he seems at a loss. If Allison relied on Salsman for his remarks on business-cycle theory, his errors would be understandable, given Salsman's egregious mistakes and prejudices. I freely acknowledge that my suggestion is no more than speculation.

If Allison is not altogether satisfactory as an expositor of Austrian economics, is he at least fully committed to the free market? He is an Objectivist; and, whatever one's opinion of Ayn Rand's philosophy, must not any fair-minded person acknowledge that she and her followers stand among the foremost supporters of the free market?

Although, to his credit, Allison calls for a systematic move to "pure" capitalism, his move falls short of this laudable goal. Robert Wenzel, in an excellent notice of the book in his Economic Policy Journal, has already called attention to a number of Allison's questionable recommendations, including his support for the flat tax and education vouchers and opposition to the homeowner's deduction.

some conservatives argue against the flat tax because they claim it would be easier to raise the tax in the future. This is ridiculous. A properly designed flat tax would be harder for Congress to increase because the increase would have a negative impact on all voters. (p. 197)

Allison seems to have forgotten that Congress has on many occasions passed bills that call for tax increases.

In addition to the items Wenzel has so ably catalogued, I should like to call attention to Allison's support for government unemployment insurance. He thinks that the present program is excessive; but, he says,

There are many honest workers who would like a job, but who cannot obtain employment because of the minimum-wage laws. It is unjust to deny people work and, at the same time, not provide unemployment benefits. (p. 213)

The principle here appears to be that those disadvantaged by government intervention may claim a compensating intervention in their favor. Is this not a dangerous idea? Why not, in like fashion, a protective tariff for businesses that compete with foreign firms that receive subsidies from their governments? I leave it to readers to extend the list.

Like Wenzel, I find Allison's views on foreign policy disturbing. He wants to cut the military budget and opposes the wars in Iraq and Afghanistan; but opposition to these wars will enable us to confront the real threats, such as North Korea, Iran, and "Islamic terrorism." Like his mentor Peikoff, Allison stands among those who would "busy giddy minds with foreign quarrels."

Despite the book's manifest mistakes about Austrian theory, it has attracted praise from economists, including Tyler Cowen, Peter Boettke, and Bruce Yandle. I take some comfort from the fact that none of these endorsements mentions the Austrian School.