GET NEWS AND ARTICLES IN YOUR INBOXPrint
A
A
Home | Mises Library | Must America Embrace Empire to Be Safe?

Must America Embrace Empire to Be Safe? 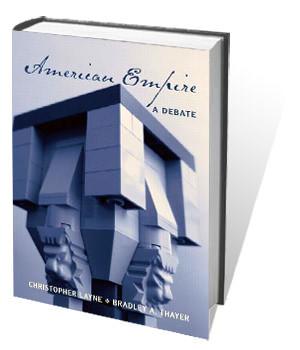 Christopher Layne and Bradley Thayer both specialize in international-relations theory, in particular what they term "grand strategy," but they hold very different views on what foreign policy the United States ought to pursue. "Distilled to its essence, grand strategy is about determining the state's vital interests — that is, those that are important enough for which to fight — and its role in the world" (p. x).

Despite their differences, they are friends, and American Empire is a debate between them. Each author begins with a long chapter presenting his conception of grand strategy: these chapters were written independently. After this, each responds to the other in a shorter chapter. Layne has much the better of the argument, though he has not fully broken from one of the dubious claims of what is misleadingly called "realist" theory.

Both authors agree on a fundamental fact. America is at the present time an empire, despite the facts that our leaders disclaim imperial ambitions.

Is America an empire? Yes, it is. An empire is a state that surpasses all others in capabilities and sense of mission … an empire has worldwide interests … empires always have a mission they seek to accomplish — this is usually creating, and then maintaining, a world order. (p. 3)

True, our political leaders refuse to use the word "empire," but this is understandable:

They choose not to use it because it does not help to achieve the grand strategic goals of the United States.… For an American president or senior official to state that America is an empire would only help to organize resistance to it. (p. 4)

A better objection to thinking that America is an empire is that we do not have very many colonies, in the style of the empires of old. This however is a matter of form rather than substance.

A great power also can establish an informal empire by using its military and economic muscle — and its culture and ideology … to install and maintain compliant, friendly regimes in foreign territories. By ruling indirectly through local elites, an imperial power can forego the burdens of direct colonial rule. (p. 59, emphasis in original)

Thayer defends the current order, in which America seeks to dominate the world, but it is not altogether clear why he does so. He devotes the bulk of his essay to a description and celebration of American power, arguing that we can, if so minded, continue for a long time to impose our will on the rest of the world.

The United States has the ability to dominate the world because it has prodigious military capability, economic might, and soft power. ["Soft power," roughly, is cultural and ideological influence.]… Will it be able to do so in the future? The answer is yes, for the foreseeable future — the next thirty to forty years. (p. 12)

No doubt America also has the power to blow up the world, but it hardly follows that we should do so: "can" does not imply "ought." If, as Thayer thinks, we need to undertake the very costly task of imposing order on the rest of the world, must there not be some nation, or group of nations, that would otherwise pose a grave danger to our safety? If no such danger impends, why should we undertake the Herculean task of dictating and enforcing the terms of international order?

Thayer fails utterly to show that the United States stands in peril from any other country. To the contrary, he shows that each of the two most likely challengers to American hegemony — China and the European Union — faces significant obstacles to an attempt to become the world's dominant power.

Although its continued economic growth is impressive, China faces major problems that will hinder its ability to replace the United States as the world's hegemon … unlike China, the EU [European Union] does nor pose a danger to the American Empire for two major reasons — political and economic. (pp. 32, 34)

Thayer argues to this effect in order to show that the United States can maintain world dominance, but he does not see that he has at the same time undermined the case for doing this. Unless we face some powerful global antagonist, what is the point of the enterprise Thayer recommends?

Thayer might reply to our objection in this way. We face no imminent danger from others only if we maintain our hegemonic position. Should we abandon this, other nations, China in particular, might supplant us and hence threaten our security.

This response exposes the most basic objection to the line of thought that Thayer pursues. He takes for granted that a world power, at least one with a different political system from our own, poses a threat to us. Why need this be so? To take his example of China, in what way would even a vastly expanded and more powerful China pose an existential threat to the United States? What political ambition does China have in the Western hemisphere, let alone in America itself? The only territorial conflict Thayer adduces between America and China involves Taiwan, surely not an integral area for American security. Of course, a power that vies for hegemonic primacy is a threat to America, if one assumes that America needs to be the world's dominant power. But why assume this? Thayer's defense of American hegemony begs the question by building hegemony into the requirements for American security.

In fairness to Thayer, he does succeed in mentioning a genuine threat to America. He is right that Islamic terrorist groups pose a genuine danger, but it surely does not require world hegemony to contain attacks from them. Further, as Layne aptly points out, these attacks are responses to American policy in the Middle East, itself a product of the hegemonic grand strategy. Were America to pursue a modest strategy confined to defense of our own territory, it is highly doubtful that these groups would view us as a target.

The United States may be greatly reviled in some quarters of the Islamic world, but were the United States not so intimately involved in the affairs of the Middle East, it's hardly likely that the detestation would have manifested itself as violently as it did on 9/11. (p. 70)

The assumption that American security requires world hegemony is indeed a puzzling one, and it is Layne who clarifies what lies behind it. As mentioned earlier, both authors are realists, who stress the primacy of power in international relations. Layne notes that one type of realist theory underlies Thayer's approach. "Offensive realism holds that the best strategy for a great power is to gain primacy because, if it can do so, it will not face any serious challenges to its security" (p. 62).

As the old adage has it, the best defense is a good offense, and some proponents of this school of thought willingly embrace drastic prescriptions for policy. The mere prospect that China might rise in power to challenge American primacy is for these offensive realists sufficient grounds for launching a preventive war against that country.

Advocates of containment hope that … this strategy will halt China's rise and preserve America's primacy. However, as one leading proponent of containment argues, if these steps fail to stop China's great power emergence, "the United States should consider harsher measures." That is, before its current military advantage over China is narrowed, the United States should launch a preventive war to forestall China's emergence as a peer competitor. (p. 73)

Layne does not mention in the text the author of this harrowing idea, but his reference discloses that it is the book's coauthor, Bradley Thayer (p. 99, note 74).

Layne's response to offensive realism is within its own terms a good one. He points out that the pursuit of world hegemony will arouse the resentment of other nations, encouraging them to unite against the dominant power.

Up to a point … it is a good thing for a state to be powerful. But when a state becomes too powerful, it frightens others; in self-defense, they seek to offset and contain those great powers that aspire to primacy. (p. 63)

So far as the danger to us posed by rising powers like China is concerned, why not rely on regional coalitions of nations to "balance against" the new threat? This is the essence of the "offshore balancing" strategy that Layne favors. It is, he holds, much less costly and dangerous than offensive realism.

The key component of a new geopolitical approach by the United States would be the adoption of an offshore balancing strategy.… The other major powers in Asia — Japan, Russia, India — have a much more immediate interest in stopping a rising China in their midst than does the United States, and it is money in the bank that they will step up to the plate and balance against a powerful, expansionist state in their own neighborhood. (p. 76)

Though Layne makes some excellent points, he fails fully to break with the "realist" axiom that the mere existence of a powerful state poses a danger to us. Thus, he calls for the government to regulate trade with China in order to hamper its technological progress:

American trade with China should be driven by strategic, not market, considerations.… Individual American corporations may have an interest in penetrating the Chinese market, but there is no national interest, for example, in permitting U.S. firms to facilitate China's development of an advanced aerospace industry. (p. 74)

Unless a nation directly threatens us, why should we endeavor to impede its activities?

Despite taking for granted this dubious realist dogma, Layne's essays are insightful. He notes that, in justification of American hegemony, offensive realism is often combined with another wrongheaded view, democratic-peace theory. This holds that democracies do not fight other democracies. Hence, it is highly desirable for world peace to establish democratic regimes where these do not presently exist. Concerning this position, Layne remarks,

The democratic peace theory is probably the most overhyped and undersupported "theory" ever to be concocted by American academics. In fact, it is not a theory at all. Rather it is a theology that suits the conceits of Wilsonian true believers — especially the neoconservatives who have been advocating American Empire since the early 1990s. (p. 94)

Though offshore balancing is a vast improvement over American empire, it is not the best available grand strategy. The prize goes rather to isolationism: its proponents "argue that the United States should withdraw from involvement in international politics" (p. 3).

Long ago, John Quincy Adams expressed the point in more eloquent fashion: "America goes not abroad in search of monsters to destroy."