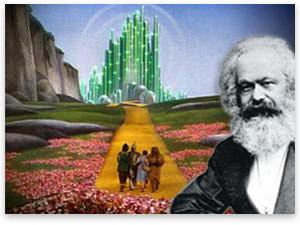 [This article is excerpted from volume 2, chapter 11 of An Austrian Perspective on the History of Economic Thought (1995). An MP3 audio file of this chapter, narrated by Jeff Riggenbach, is available for download.]

Despite Marx's claim to be a "scientific socialist," scorning all other socialists whom he dismissed as moralistic and "Utopian," it should be clear that Marx himself was even more in the messianic utopian tradition than were the competing "Utopians." For Marx not only sought a future society that would put an end to history: he claimed to have found the path toward that utopia inevitably determined by the "laws of history."

But a utopian, and a fierce one, Marx certainly was. A hallmark of every utopia is a militant desire to put an end to history, to freeze mankind in a static state, to put an end to diversity and man's free will, and to order everyone's life in accordance with the utopian's totalitarian plan. Many early communists and socialists set forth their fixed utopias in great and absurd detail, determining the size of everyone's living quarters, the food they would eat, etc. Marx was not silly enough to do that, but his entire system, as Thomas Molnar points out, is "the search of the utopian mind for the definitive stabilization of mankind or, in gnostic terms, its reabsorption in the timeless." For Marx, his quest for utopia was, as we have seen, an explicit attack on God's creation and a ferocious desire to destroy it. The idea of crushing the many, the diverse facets of creation, and of returning to an allegedly lost unity with God began, as we have seen, with Plotinus. As Molnar sums up,

In this view, existence itself is a wound on nonbeing. Philosophers from Plotinus to Fichte and beyond have held that the reabsorption of the polichrome universe in the eternal One would be preferable to creation. Short of this solution, they propose to arrange a world in which change is brought under control so as to put an end to a disturbingly free will and to society's uncharted moves. They aspire to return from the linear Hebrew-Christian concept to the Greco-Hindu cycle — that is, to a changeless, timeless permanence.

The triumph of unity over diversity means that, for the utopians, including Marx, "civil society, with its disturbing diversity, can be abolished." Molnar then makes the interesting point that when Hayek and Popper rebut Marxism by demonstrating

that no mind — not even that of a Politburo equipped with supercomputers — can overview the changes of the marketplace and its myriad components of individuals and their interactions, they miss the mark. Marx agrees with them. But, he wants to abolish the marketplace and its economic as well as intellectual ('legal, political, philosophical, religious, aesthetic') components, so as to restore a simple world — a monochrome landscape. His economics is not economics but an instrument of total control.1

All well and good, but, as the history of communist countries has shown, there are not many followers of Marx who are willing to settle for a world where no economic calculation is possible, and therefore where production collapses and universal starvation ensues.

Substituting in Marx for God's will or the Hegelian dialectic of the world-spirit or the absolute idea, is monist materialism, in its central assumption, as Molnar puts it, "that the universe consists of matter plus some sort of one-dimensional law immanent in matter." In that case, "man himself is reduced to a complex but manipulable material aggregate, living in the company of other aggregates, and forming increasingly complex super aggregates called societies, political bodies, churches." The alleged laws of history, then, are derived by scientific Marxists as supposedly evident and immanent within this matter itself.

The Marxian process toward utopia, then, is man acquiring insights into his own true nature, and then rearranging the world to accord with that true nature. Engels, in fact, explicitly proclaimed the Hegelian concept of the man-God: "Hitherto the question has always stood: What is God? — and German [Hegelian] philosophy has resolved it as follows: God is man.… Man must now arrange the world in a truly human way, according to the demands of his nature."2

But this process is rife with self-contradictions; for example, and centrally, how can mere matter gain insights into his (its?) nature? As Molnar puts it, "for how can matter gather insights? And if it has insights, it is not entirely matter, but matter plus."

In this allegedly inevitable process, of arriving at the proletarian communist utopia after the proletarian class becomes conscious of its true nature, what is supposed to be Karl Marx's own role? In Hegelian theory, Hegel himself is the final and greatest world-historical figure, the man-God of man-Gods. Similarly, Marx in his view stands at a focal point of history as the man who brought to the world the crucial knowledge of man's true nature and of the laws of history, thereby serving as the "midwife" of the process that would put an end to history. Thus Molnar:

Like other Utopian and gnostic writers, Marx is much less interested in the stages of history up to the present (the egotistic now of all Utopian writers) than in the final stages when the stuff of time becomes more concentrated, when the drama approaches its denouement. In fact, the Utopian writer conceives of history as a process leading to himself since he, the ultimate comprehensor, stands in the center of history. It is natural that things accelerate during his own lifetime and come to a watershed: he looms large between the Before and the After.3

The achievement of the Marxist utopia is, moreover, dependent upon leadership and rule by the Marxian cadre, the possessors of the special knowledge of the laws of history, who will proceed to transform mankind into the new socialist man by the use of force. In the Judeo-Christian tradition, the existence of evil is accounted for by the free will of the individual. In monist, determinist systems, on the other hand, all history is supposed to be determined by fixed laws, and therefore evil can only be apparent, while really acting in a deeper sense as a servant of the higher good. All apparent evil must be truly good, and serve some sort of determined plan, whether it be the unfolding of the God-man or an atheistic version thereof. Coercing people by a cadre in order to create a new socialist man cannot be evil or unacceptable in a just society. On the contrary, it is the duty of the Marxist vanguard, they who are the servants of the next inevitable stage of history, to impose such a regime. This is a duty to history, that alleged entity to which the cadre are in service, and who (which?) is destined to judge the actions of the past, to judge them as moral or immoral, as either advancing the birth of the allegedly inevitable historical future, or of thwarting such birth. In short, history or the cadre has the privilege and duty of judging any person or movement as being either "progressive" (i.e. advancing the determined march of history) or "reactionary" (retarding that inevitable march).