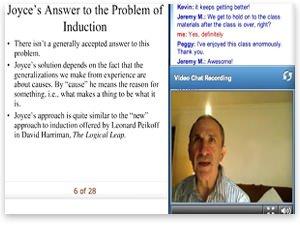 Savannah Liston, 17, recently posted comments on her Facebook page, expressing excitement that would be reserved by other teenagers for having won free tickets and an all-expenses-paid trip to a Mumford & Sons concert. Savannah's event? An online introduction to logic class.

As 1 of 211 participants (204 paying students plus a few professors and interns), but 50 years older than most of them, I was struck by how similar my own responses to this logic class were to Savannah's. Despite a legal education, which is supposed to favor logical thinkers, I had not had any prior course in logic, and I wanted to know more about constructing persuasive arguments and spotting fallacies in them.

Savannah and I found by the end of the course that we shared two views: (1) neither of us is suddenly, as if by magic, able to analyze arguments about philosophy, politics, and economics by having worked through the course, but (2) Professor David Gordon has placed us both on a path to practicing skills that can help us avoid fallacies in our own arguments. That alone is ground breaking, because logic is rarely studied today. An introduction to logic ought to be a core offering at the online Mises Academy each year.

Logic hasn't always been such a poor stepchild. It was once required material for every educated adult. Aristotle's system of logic dominated the study of philosophy until the mid-19th century. Once a necessary skill of orators, logic today finds its place in critical thinking, artificial intelligence, and law, among other fields, but not in many educational course offerings outside of philosophy departments. What a serious lack.

Living reasonably requires an understanding of economics. An understanding of economics requires correct reasoning. The study of human action asserts that man acts — that the action axiom is true. From this is logically deduced all the propositions of economics, each verbal and meaningful. Self-ownership, property, and the enforcement of these rights flow from the action axiom. These concepts are fundamental to the existence of free societies and the flourishing of noninvasive, win-win interactions, like voluntary exchange and gifts. These noninvasive actions contrast starkly with the invasive actions of war, murder, assault, robbery, and slavery, which have dominated human history. Thus, understanding economic laws can have practical applications toward obtaining social cooperation and peace. Logic leads us to understand the deduced economic laws.

David Gordon, via his January 13 – February 24 course, How to Think: An Introduction to Logic, may have compelled 204 more students to better grasp economic laws. He accomplished that through presenting the essentials of logic. His professorial success is due to three factors: his presentation, his interaction with students, and his personal integrity.

Savannah found that she loved the spontaneity of the presentations: "while there was order and purpose to the class, there was room for sidetracking depending on the students and their interests."

She also praised the interaction between the professor and students. "About 2 minutes before it started some of the students started petitioning Professor Gordon to open with a logic joke. I don't think he had time to come up with a good one then … perhaps next class he will. :)"

Many times Professor Gordon responded immediately to questions posed to him on the chat board. Israel Castillo's question was respectfully accorded close attention. Castillo proposed that,

To which Dr. Gordon responded,

Dr. Gordon's integrity, his intellectual honesty, was evident and appreciated. As Savannah noted,

He didn't say, "Here, this book and this theory of knowledge is the only correct way to view the world. Everyone else is wrong. Just believe me." He pointed out controversial ideas and explained why they were controversial and encouraged the students to study both sides and come to their own conclusions. I liked that a lot.

I've learned a lot about logic in your course, but in order to build a solid foundation, I think it would help if I just had some straightforward syllogisms to analyze. I'd feel much more comfortable analyzing longer verbal arguments if I had some practice in identifying fallacies in basic syllogisms first.

In response to a student's frustration with the applications of logic, Dr. Gordon cautioned that "Logic is concerned only with the consistency of propositions. It isn't a tool to help you discover solutions to problems." It is that kind of equitable response that led John Perrings to post, "Prof. Gordon is the man. He is such an all-around knowledgeable person. My criticisms below aside, he can handle any question thrown at him."

There are those educators, like Wendy Brown, the Heller Professor of Political Science at Berkeley, who disparage online courses, whether on logic or on other subjects. She asks,

What is sacrificed when classrooms disappear, the place where good teachers do not merely "deliver content" to students but wake them up, throw them on their feet and pull the chair away? Where ideas can become intoxicating, where an instructor's ardor for a subject or a dimension of the world can be contagious? Where scientific, literary, ethical or political passions are ignited?

But "online" doesn't describe the experience Savannah, or I, had. We definitely received more than software. The hybrid experience of a human, especially a David Gordon, and live chat and interaction, along with Q&A time, quizzes, and other forums, did allow Gordon's ardor for and expertise in logic to bubble across. Like Perrings said, "Prof. Gordon is the man."

Online courses are said to be plagued by high dropout rates, but that did not happen with the logic class. Out of 220 paid participants, only 16 students asked for refunds. The reason given was split between "the class is harder than I thought it would be" and "my time conflicts are too great" (which may be the same reason expressed differently). Overall class size of paid students ended up at 204. Those who were live online during the actual Thursday-evening hours ranged from more than 100 to about 60. More than half the class chose their own hours for viewing. This 204 size places Gordon's Logic class in the top five classes yet given at the Mises Academy. (The largest class was Anatomy of the Fed with 270.)

Participants did find that an online course in general and an introduction to logic in particular are valuable and desirable.

Matt Tordoff's feedback expressed both of the main themes of the comments gathered:

I think it would have been better to take some baby steps in getting [to the real-world example of Krugman]. We haven't even covered the different types of logical fallacies, much less had the opportunity to learn and practice some simpler variations of those fallacies before jumping into more difficult subject matter.

Erick Nieves obviously felt the same way when he typed, "This was all very difficult to grasp in one sitting. Does anybody know of any websites where there are practice questions for logic?" Several responded with suggestions. Asking for more exercises and readings is the mark of interested students.

And the students asked every week for some new material. David Gordon suggested a total of four further books: The Art of Deception, by Nicholas Capaldi; Reason and Argument, by Peter Geach; Logic as a Human Instrument, by Francis Parker and Henry Veatch; and Formal Logic, by Jacques Maritain.

A good half-dozen students seemed so completely up to speed that I imagine they are reading those books already. Joel Pettit, Aneesh Mulye, Mashuri, Jooseppi & Ruth, and Israel, to mention only a few, contributed tough questions, appeared to know answers, and are my picks to show up as students in Gordon's forthcoming How to Know: The Epistemology of Ludwig von Mises which runs April 7 through May 12, 2011. I'm in.

Accolades to Dr. Gordon poured into the chat stream at the end of the final lecture. Like flowers thrown at a star's feet, posts expressed gratitude and exuberance:

It will not be surprising to see Daniel James Sanchez (an admitted Mises insider and the administrator of the Mises Academy) as a professor someday. Danny (formerly known as Grayson Lilburne) is a star in his own right. Among hundreds of Danny's contributions to the class, four were especially helpful. They were:

Savannah voiced her own response to this, her first online-course experience, writing that

overall, the interest and enthusiasm was amazing. The other students are truly interested in this subject and have a deep desire to learn. I think that is what sets this apart from an ordinary college course. They're not taking it for the credits. They're taking it for the information and knowledge.

So while the class was a little challenging for me, it was GREAT.

Savannah had told Jeremiah Dyke late last summer that she wanted her first online course to be "something more rigorous than a principles course"; she wanted something to "really challenge me." Considering that this recent high-school graduate was the recipient of the John David Fernandez memorial award at Mises University in 2010, is a webinar Austrian Economics instructor, is author of her first novel Path of Grass, is holder of her first job (office manager), and, in the words of Doug French, is a "live wire," I'd say Mises Academy online courses are proving themselves to be challenging to the best of us and ultimately rewarding for each of us who participate.