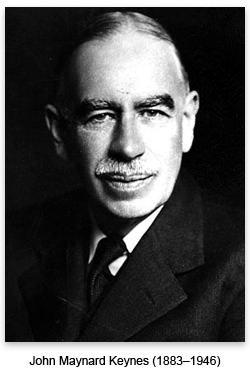 The work cumbersomely entitled, The General Theory of Employment, Interest and Money, now commonly abbreviated as The General Theory, was published in 1936. It was therefore only ten years old when the author, John Maynard Keynes, died last April. Probably no other book has ever produced in so little time a comparable effect. It has tinctured, modified, and conditioned economic thinking in the whole world. Upon it has been founded a new economic church, completely furnished with all the properties proper to a church, such as a revelation of its own, a rigid doctrine, a symbolic language, a propaganda, a priestcraft, and a demonology. The revelation, although brilliantly written, was nevertheless obscure and hard to read, but where one might have expected this fact to hinder the spread of the doctrine, it had a contrary result and served the ends of publicity by giving rise to schools of exegesis and to controversies that were interminable because nothing could be settled. There was no existing state of society in which the theory could be either proved or disproved by demonstration — nor is there one yet.

The moment of the book was most fortunate. For the planned society they were talking about the Socialists were desperately in need of a scientific formula. Government at the same time was in need of a rationalization for deficit spending. The idea of welfare government that had been rising both here and in Great Britain — here under the sign of the New Deal — was in trouble. It had no answer for those who kept asking, "Where will the money come from?" It was true that government had got control of money as a social instrument and that the restraining tyranny of gold had been overthrown, but the fetish of solvency survived and threatened to frustrate great social intentions.

Just at this historic crisis of experimental politics, with the Socialists lost in a wilderness lying somewhere between Utopia and totalitarianism, and with governments adrift on a sea of managed currency, afraid to go on and unable to turn back, the appearance of the Keynes theory was like an answer to prayer. Its feat was twofold. To the Socialist planners it offered a set of algebraic tools, which, if used according to the manual of instructions, were guaranteed to produce full employment, economic equilibrium, and a redistribution of wealth with justice, all three at once and with a kind of slide-rule precision — provided only that society really wanted to be saved. And the same theory by virtue of its logical implications delivered welfare government from the threat of insolvency. That word — insolvency — was to have no longer any meaning for a sovereign government. The balanced budget was a capitalist bogey. Deficit spending was not what it seemed. It was in fact investment; and the use of it was to fill an investment void — a void created by the chronic and incorrigible propensity of people to save too much. "There has been," he said, "a chronic tendency throughout history for the propensity to save to be stronger than the inducement to invest. The weakness of the inducement to invest has been at all times the key to the economic problem." By investment he was supposed to mean the use of capital in the spirit of adventure.

Briefly therefore the theory was that when people were not investing enough in their own future to keep themselves all at work the government must do it for them. Where and how would the government get the money? Well, partly by taxing the rich, who notoriously saved too much; partly by borrowing from the rich, and, if necessary as a last resort, by printing it — and everything was bound to come out all right because from full employment society at large would grow always richer and richer. Ultimately the economic satisfactions of life would become dirt cheap, the interest rate would fall to zero, and the sequel would be the painless extinction of the rentier class, meaning those who live by interest and produce nothing.

If I am right [he said] in supposing it to be comparatively easy to make capital goods so abundant that the marginal efficiency of capital is zero, this may be the most sensible way of gradually getting rid of many of the objectionable features of capitalism. For a little reflection will show what enormous social changes would result from a gradual disappearance of a rate of return on accumulated wealth. A man would still be free to accumulate his earned income with a view to spending it at a later date. But his accumulation would not grow. He would simply be in the position of Pope’s father, who, when he retired from business, carried a chest of guineas with him to his villa at Twickenham and met his household expenses from it as required.

Ancient Egypt [he said] was doubly fortunate, and doubtless owed to this its fabled wealth, in that it possessed two activities, namely, pyramid building as well as the search for the precious metals, the fruits of which, since they could not serve the needs of man by being consumed, did not stale with abundance. The Middle Ages built cathedrals and sang dirges. Two pyramids, two masses for the dead, are twice as good as one; but not so two railways from London to York. Thus we are so sensible, have schooled ourselves to so close a semblance of prudent financiers, taking careful thought before we add to the financial burdens of posterity by building them houses to live in, that we have no such easy escape from the sufferings of unemployment. We have to accept them as an inevitable result of applying to the conduct of the State the maxims which are best calculated to enrich an individual by enabling him to pile up claims to enjoyment which he does not intend to exercise at any definite time.

It is significant to recall that the first definite and conscious application of the theory was made by the New Deal; and when in the third year Mr. Roosevelt began to say that the government’s deficit spending must be regarded as an investment in the country’s future, he was taking the word directly from the Keynes theory. The promised results did not follow; unemployment was not cured. This disappointment, say the believers, was owing to no fault of the theory but simply and only to the fact that the deficit spending did not go far enough. The deficits should have been courageously greater.

It is perhaps even more significant that in his own country he was regarded as a dangerous luminary and that the British government was unable to avail itself of his genius until the time came when it found itself in a very difficult money position. It had already divorced the gold standard, pretending to make a moral of it; and then, as the British mentality changed from that of a creditor to that of a debtor country, what the Treasury needed was someone who could clothe the bareness of financial heresy with a plausible nontransparent drapery and at the same time give to the managed pound sterling a glitter to replace the lost luster of the gold pound. And so it happened that Mr. Keynes was taken into the British Treasury as its principal advisor, seated on the board of the Bank of England, and elevated to the peerage as Baron Keynes of Tilton.

All planners take Keynes for their prophet. But in the one great test of his prophetic powers he failed historically. He had represented the British Treasury at the making of the Versailles Treaty. Soon after, he resigned his post in order to attack the treaty and wrote a book entitled The Economic Consequences of the Peace, the political effect of which, regarding it now in retrospect, was disastrous. His argument was that Germany could never pay the reparations that were demanded of her, and that even if she could afford to pay them her creditors could not manage to receive them. In view of what Germany was able to do in preparation for World War II, it was nonsense to say that she couldn’t pay reparations on account of World War I, and if she had not been let off, World War II might not have been, or at least not yet.

This article is excerpted from The Critics of Keynesian Economics, chapter 12, "John Maynard Keynes" (1960; 2009).