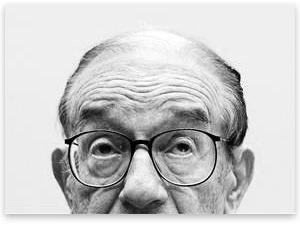 In his March 11 Wall Street Journal op-ed, former Federal Reserve Chairman Alan Greenspan tried to exonerate himself from the housing boom and bust. Even though more and more analysts are realizing that Greenspan's low interest rates fueled the bubble, the ex-maestro himself uses statistics to defend his record. On these pages Frank Shostak has already taken on Greenspan's spurious arguments, but in the present article I'll touch on a few more points.

Greenspan's main argument is that the Fed lost control of the ability to move long-term interest rates, especially 30-year fixed mortgage rates. Since it is these longer rates that (at least in theory) ought to influence house prices much more than the overnight federal-funds rate, Greenspan can't possibly be held responsible for the housing bubble. In his words,

The Federal Reserve became acutely aware of the disconnect between monetary policy and mortgage rates when the latter failed to respond as expected to the Fed tightening in mid-2004. Moreover, the data show that home mortgage rates had become gradually decoupled from monetary policy even earlier — in the wake of the emergence, beginning around the turn of this century, of a well arbitraged global market for long-term debt instruments.

U.S. mortgage rates' linkage to short-term U.S. rates had been close for decades. Between 1971 and 2002, the fed-funds rate and the mortgage rate moved in lockstep. The correlation between them was a tight 0.85. Between 2002 and 2005, however, the correlation diminished to insignificance.

Now this is extremely misleading. Judging from Greenspan's description, the reader would think that the federal-funds rate (which the Fed directly targets with its open-market operations) and the mortgage rate moved along in sync, when all of a sudden Greenspan tried to jack up short-term rates in 2004, and yet those pesky mortgage rates refused to move up. Hence, he did what he could to slow the housing bubble, but alas, it was precisely when he tried to help that the markets rendered him impotent.

On the other hand, Greenspan says (truthfully) that the correlation between the two series broke down earlier, in 2002. Let's look at the graph and see exactly what happened:

So it's true, the red and blue lines in the chart above moved pretty much in lockstep up until 2002, as Greenspan claimed. But the disconnect occurred when Greenspan slashed short-term rates while mortgage rates held steady. Since the participants in the mortgage market wisely realized that rates wouldn't be held at 1% forever, they didn't foolishly drop their own yields down so far. Then in June 2004, when Greenspan began ratcheting the federal-funds rate back up, it is perfectly understandable that mortgage rates wouldn't rise with them.

To repeat, Greenspan's defense of his policies made it sound as if he tried to push up mortgage rates, but that they wouldn't budge. Yet, as the chart above makes clear, Greenspan didn't really push up very hard on rates. After all, he stopped short of breaking through mortgage rates (the blue line) once the federal-funds rate (the red line) plateaued in June 2006 at 5.25%. If he really had wanted to push up mortgage rates, he could have pushed up the federal-funds rate more.

Let's look at this issue a little more carefully. In the chart below, I've graphed the difference between the federal-funds and mortgage rates; i.e., I am plotting the gap between the blue and red lines from the first chart, above. In addition, I overlay the average value of this gap for the period 1971–2002:

The above chart takes a minute to digest, but if the reader masters it, he will see just how silly Greenspan's argument is. The great "divergence" between the two interest rate series that began in 2002 was nothing unusual by historical standards. And once Greenspan tried to slam on the brakes by raising short rates (in 2004), a full year went by before the gap between the two had returned to its average over the 1971–2002 period — the very period that Greenspan says the two series moved "in lockstep." In terms of the graph itself, it is not until June 2005 that the blue line crosses below the red line. Only from that point onward was the gap between the mortgage and federal-funds rates even smaller than average. (And the gap even went negative several times during the 1970s, when the federal-funds rate exceeded mortgage rates.)

So to repeat, the reason that the correlation between the federal-funds rate and the 30-year mortgage rate broke down during the housing boom was that Greenspan whipsawed short rates waaaaaay down, then waaaaaay up, in a fairly narrow window. Mortgage rates (thank goodness) didn't move around in such a volatile manner. If one series goes from 6.5% down to 1%, then back up to 5.25%, while the other series stays roughly flat, then obviously the measured correlation is going to be low.1

Greenspan repeats the claim that Asian savings were the real culprit. But there are two problems with this theory: first, global savings rates continued to rise throughout the housing boom and bust. So it's very difficult to explain the peak of the housing boom with reference to Asian saving. (In contrast, Greenspan's actions with short-term rates fit the fortunes of the housing market much more closely.)

But a second major problem is that even on its own terms, the influx of blind Asian saving — to the extent it existed at all — was itself partially a product of Greenspan's monetary inflation. Remember that the Chinese central bank had maintained a rigid peg to the dollar until it was pressured to drop it — right around the time the housing boom faltered:

To put it somewhat simplistically, when Greenspan flooded the world with more dollars, the dollar fell sharply against most major currencies. But in order for the Chinese to keep the renminbi (yuan) from appreciating against the dollar as well, they had to load up on dollar-denominated assets, such as US Treasuries. Thus, Greenspan's inflation in combination with the Chinese peg, on paper might have appeared as an irrational influx of Asian investment, which stubbornly refused to subside even as US indebtedness grew.

It is bad enough that Alan Greenspan refuses to acknowledge what more and more people are realizing: his ultralow interest rates — which were in turn accomplished through injections of artificial credits into the banking system — fueled the housing boom. The Greenspan Fed was not a sufficient condition to cause the housing and stock bubbles, but it was almost certainly a necessary factor. If the Fed had let the post-9/11 recession run its course, there would have been no absurd boom (and now bust).

But beyond Greenspan's refusal to admit his mistakes is the ludicrous accusation that high savings rates among the world's poorest people — coupled with growing incomes made possible by technological and legal advances — was cause for misery. What a warped view of how the market economy works, to think that savings and foreign investment can cripple an economy.