GET NEWS AND ARTICLES IN YOUR INBOXPrint
A
A
Home | Mises Library | Gloom, Doom, and Optimism 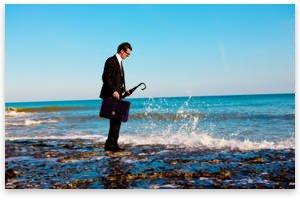 Marc Faber is a market analyst and publisher of the "Gloom, Boom and Doom Report" newsletter. As you may have gathered from that title, he's rather pessimistic about the economy. (He's also been very accurate concerning economic trends over his career.) But he really dropped jaws recently when he made the following statement on CNBC:

I am a great optimist in life; otherwise I would commit suicide in view of the kind of governments we have nowadays.

Hyperbolic suicide comments aside, it brings up an interesting irony that I have been noticing for a while: many of the most bearish economic forecasters describe themselves as optimists in their day-to-day lives. I consider myself extremely optimistic, but my views on the economy are dire at best. The fact that we optimists are so pessimistic about the economy should cause you to take notice and ask if maybe there is something to all this gloom and doom after all.

That may seem like a paradox. If you listen to the financial news, those of us who have been predicting that the economy is on the verge of collapse are "gloom and doomers" who are just negative people. When we say that the Greek debt crisis can't be resolved with more bailouts and that default is inevitable, they call us defeatists. When we point out that America's economy is as bad as or worse than the problems in Europe and that the only solutions to get us out of this mess are currently politically impossible, they say we have no faith in America.

In fact, nothing could be further from the truth. We economic "gloom and doomers" are simply realists who understand the nature of the crisis based on Austrian economic principles. Our thirst for the truth has led us to question the Keynesian economic theories taught in our schools and propagated in the media, which sound sensible on the surface, but fall apart under logical scrutiny. This Austrian understanding of business cycles and the nature of money and human action tells us that unsustainable debts cannot be sustained, and that a debt-based fiat-money system that can't go on forever, won't.

Close your eyes and imagine you are living in New York City. (Now open your eyes so you can read the rest of this.) Imagine the local weathermen are all astrologists who have declared that although the sky looks dark, our horoscope says we have a bright future ahead of us. The clouds have always moved on in the past, and this time is no different. Then imagine an astronomer comes along and says, "I've done some scientific experiments and studied the data; that dark spot in the sky is actually a comet and it's heading straight for New York."

Is the astronomer a pessimist because his thinks New York will be hit by a comet? I would suggest that he's an impartial analyst whose tools provide a more accurate way of looking at the universe than astrology does.

Is it pessimistic for someone to want to look at the scientist's negative data, even when all off the forecasters on the news agree he's a lone quack? I would say that's just being inquisitive, an optimistic trait.

Is it then pessimistic to observe that his experiments are based in science, and to question the majority who say astrology holds the answers? I would suggest that is simply making a judgment based on evidence as opposed to popular opinion.

Is it pessimistic or anti–New York for that person to say to his fellow New Yorkers, "Hey, I've seen the data and there's a good chance that the growing black spot in the sky is a comet that will hit right here. We should all move some of our assets out of the city now and be prepared to flee entirely if it gets darker"? I'd say that's just being prudent.

Is it optimistic to sit tight and say, "It's probably not a comet, but even if it is, someone will save us. Perhaps the government will reverse gravity just in time to turn the comet around." No, that's just foolish. The pessimists are the ones who bury their heads in the sand when things get tough — or they may even know there is something seriously wrong, but they give up because they think there's nothing they can do.

The optimists are the ones who search for the truth and have the conviction to believe in themselves. They are not scared of a changing future that will be difficult for many, but instead look the future straight in the eye and adapt and prepare. They are the ones saying, "Hey, I've got a bus with a full tank of gas and a roadmap. Let's get out of the city before panic sets in and the bridges jam up. Besides, even if I'm wrong, there are some great places to explore."

Any man who is an individualist and a libertarian in this day and age has a difficult row to hoe. He finds himself in a world marked, if not dominated, by folly, fraud, and tyranny. He has, if he is a reflecting man, three possible courses of action open to him: (1) he may retire from the social and political world into his private occupation … (2) he can set about to try to change the world for the better, or at least to formulate and propagate his views with such an ultimate hope in mind; or, (3) he can stay in the world, enjoying himself immensely at this spectacle of folly.

Optimism is what drives Mark Faber, as it drove the "irrepressible" Rothbard, to choose path number two. Optimism is the reason we "gloom and doomers" want to educate as many people as we can about the problems that face our economy, and how we can avoid these problems in the future. We are optimistic that people will heed our warnings to protect themselves, learn the right lessons from a collapse of our current system, and turn to freedom instead of government for solutions. We are the ones who see a glorious future when the dust settles, the astrologists, I mean, Keynesians have been discredited, and we can start anew with sound economics, sound money, and a revitalized belief in liberty.

Mike Scully is a product designer and mechanical engineer. In 2010, he started the blog LibertyInsight.com to inform people of the seldom-heard Austrian perspective and to explain how free-market solutions and sound money can provide the answers to our problems.