GET NEWS AND ARTICLES IN YOUR INBOXPrint
A
A
Home | Mises Library | George Buchanan: Radical Calvinist 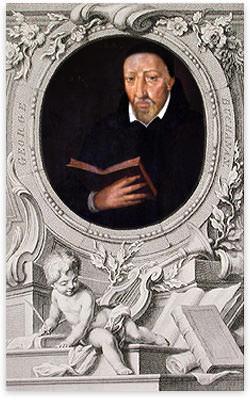 The most fascinating as well as the most radical of the Calvinist theorists of the late 16th century was not a French Huguenot but a Scot, who spent most of his time in France. George Buchanan (1506–1582) was a distinguished humanist historian and poet, who taught Latin at the College de Guyenne in Bordeaux. Buchanan was trained in Scholastic philosophy at the University of St. Andrews in the mid-1520s, where he studied under the great John Major. An early convert to Calvinism, Buchanan became a friend of Beza and of Mornay, and served as a member of the general assembly of the Church of Scotland.

British Calvinist thinkers of the 1550s, refugees from the Catholic rule of Queen Mary, had worked out in exile a justification for rebellion against tyranny in terms of the godly against idolatry. It remained to restate revolutionary theory in secular, natural-rights terms rather than in the strictly religious concepts of godliness and heresy. This feat was accomplished by the Scot George Buchanan, in the midst of a struggle of the Calvinist majority of Scotland against their Catholic queen. A revolution in 1560 had conquered the Scottish parliament for Calvinism in a now overwhelmingly Calvinist country, and seven years later the Calvinists deposed the Catholic queen, Mary Stuart.

In the course of this struggle, Buchanan, in 1567, began to draft his great work, The Right of the Kingdom in Scotland, which he published in 1579. Parts of Buchanan's argument appeared in speeches delivered by the new Scottish Regent James Stewart, Earl of Moray in 1568, and then in discussions between the Scottish and English governments three years later.

Buchanan began, like the Huguenots, with the state of nature and a social contract by the people with their rulers, a contract in which they retained their sovereignty and their rights. But there were two major differences. In the first place, Beza and Mornay had talked of two such contracts: a political social contract, and a religious covenant to act as a godly people. With Buchanan, the religious covenant drops out totally, and we are left with the political contract alone. Some historians have interpreted Buchanan's radical step as secularizing politics into an independent "political science." More accurately, Buchanan emancipated political theory from the directly divine or theological concerns of the Protestant founders, and returned it to its earlier base in natural law and in human rights.

More radically, Buchanan swept away the entire inconsistent Huguenot baggage of the people virtually alienating their sovereignty to intermediate "representatives." On the contrary, for Buchanan the people consent to and contract with a ruler, and retain their sovereign rights, with no mention of intermediate assemblies. But this puts far more revolutionary implications on natural rights and popular sovereignty. For then, when a king becomes tyrannical and violates his task to safeguard individual rights, this means

that the whole body of the people, and even individual citizens, may be said to have the authority to resist and kill a legitimate ruler in defence of their rights.

Thus, over two decades before the Spanish Jesuit de Mariana, George Buchanan had arrived, for the first time, at a truly individualist theory of natural rights and sovereignty — and therefore a justification for individual acts of tyrannicide. Thus, in what Professor Skinner calls "a highly individualist and even anarchic view of political resistance," Buchanan stressed that

Since the people as a body create their ruler, it is … possible at any time "for the people to shake off whatever Imperium" they may have imposed on themselves, the reason being that "anything which is done by a given power can be undone by a like power." Furthermore, Buchanan adds that, since each individual must be pictured as agreeing to the formation of the commonwealth for his own greater security and benefit, it follows that the right to kill or remove a tyrant must be lodged at all times "not only with the whole body of the people" but "even with every individual citizen." So he willingly endorses the almost anarchic conclusion that even when, as frequently happens, someone "from amongst the lowest and meanest of men" decides "to revenge the pride and insolence of a tyrant" by simply taking upon himself the right to kill him, such action are often "judged to have been done quite rightly…."1

We have seen that the Spanish Jesuit, Juan de Mariana, developed a similar theory of Lockean popular sovereignty and of individual tyrannicide two decades later. As a Scholastic, he too had a natural-law contract and not any religious covenant at the base of his theory. Skinner ably concludes that

The Jesuit Mariana may thus be said to link hands with the Protestant Buchanan in stating a theory of popular sovereignty which, while scholastic in its origins and Calvinist in its later development, was in essence independent of either religious creed, and was thus available to be used by all parties in the coming constitutional struggles of the seventeenth century.2

More typical, however, of the dominant strand of radical Calvinism emerging from the 16th century was the distinguished Dutch jurist, Johannes Althusius (1557–1638). His magnum opus was his treatise of 1603, Politics Methodically Set Forth. Althusius built upon and was similar to Mornay and the Huguenot theorists. With them, he retained the pre-Lockean popular sovereignty with consensual revocable delegation to the king, and also with them he mediated that sovereignty through representative assemblies and associations. In addition, the justification of individual tyrannicide disappears. However, one innovation of Buchanan's was retained in Althusius" massive treatise: the dropping of any religious covenant. Indeed, Althusius is more explicit, attacking theologians for infusing their political writings with "teachings on Christian piety and charity," and failing to realize that these matters are "improper and alien to political doctrine."