Your Ideology Depends on if "Your Guy" Is in Power

When George W. Bush was in the White House, left liberals were the ones denouncing war, calling for less intrusive government, and generally striking an anti-government pose. That all abruptly stopped when Obama was sworn in. And now that Obama is president, it's the conservatives who are talking about secession and denouncing violations of civil liberties. There's no sign of conservative opposition to interventionism foreign policy, though. Indeed, it seems that Obama's big sin here is not being interventionist enough.

If that was the impression you had of partisan politics over the past 16 years, you're not alone. Pew has recently updated its analysis of Americans who say that government is an "immediate threat." And sure enough, there is a very large correlation between one's suspicion of government, and if one is in the same political party as the sitting president. In other words, people only seem to notice that government is a problem when their political party is out of power. The graph looks pretty much like you'd expect: 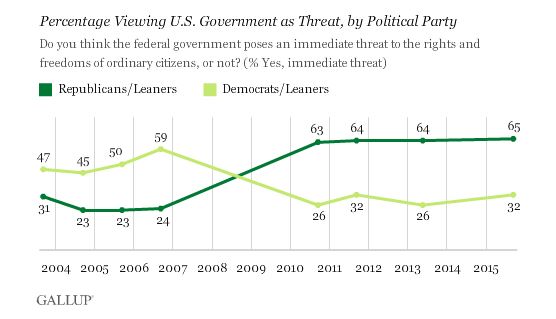 Fewer than a quarter of Republican-leaning respondents thought that government was a threat when Bush was president. At the same time, a near majority of Democrats and Democrat leaners thought so. Then, when the occupant in the White House changed, the respondents reversed their views of government power, with only about a quarter of Dems and Dem leaners fearing government, with over 60 percent of Republicans and Republican leaners saying the same.

So, when out of power, it does appear that Republicans are more anti-government, but when in power, they're even more pro-government than the Democrats surveyed.

The take away from this is that, while there is a nice baseline of people who do in fact consider government power to be a dangerous thing, the make-up of that group is dependent on capricious reasoning about whether or not "my team" or the "other team" is in power. Says Pew:

The fact that almost half of Americans see the federal government as an immediate threat to their lives and freedoms may appear alarming at first, perhaps conjuring an image of Americans worrying that the government will be breaking down their doors and engaging in random arrests of private citizens.

But two findings mitigate against this type of more dramatic interpretation. First, the fact that Democrats and Republicans have flipped in their probability of holding these views when the administration changed in 2009 shows that these attitudes reflect more of a response to the president and disagreement with his policies than a fundamental feeling about the federal government in general.

In other words, the anti-government rhetoric we hear from many corners of the partisan media generally overstates actual laissez-faire sentiment. The people who are denouncing the government today will change their tune if their guy gets elected.

In a separate Pew survey, they concluded that 11 percent of respondents both self-identify as "libertarian" and know what "libertarian" means. This is especially strong among  young people, non-Hispanic whites, and Hispanics. This is pretty good news for libertarians.

The problem, however, is this: will some of these people stop self-identifying as such when the White House changes its occupant? That's unclear given the nature of the data, and it's unclear how many of the people who today self-identify as libertarian are really just Republican leaners who will switch sides the day Jeb Bush is sworn in. That is, we need data that distinguishes between short-term libertarians and long-term ones. There are whose who are suspicious of the political system consistently, and there are those who are only fearful when the other party is in power.

Interestingly, there's something to be said here in favor of a permanent, unelected executive. The rotating presidency acts to convince the voters that, at least occasionally, one of the "good guys" will be in power. This helps maintain a baseline of support for the institutions by convincing out-of-power opponents that they should never really double down on opposition to the government.  They might eventually get to run it again. Here, again, we see the democratic mechanism as the great opiate of political opposition.