GET NEWS AND ARTICLES IN YOUR INBOXPrint
A
A
Home | Wire | New Labor Productivity Numbers: The Worst in 35 Years

The only other period with such a long period of declining productivity can be found in 1973 and 1974 in the midst of the 1973-75 recession following the Nixon shock: 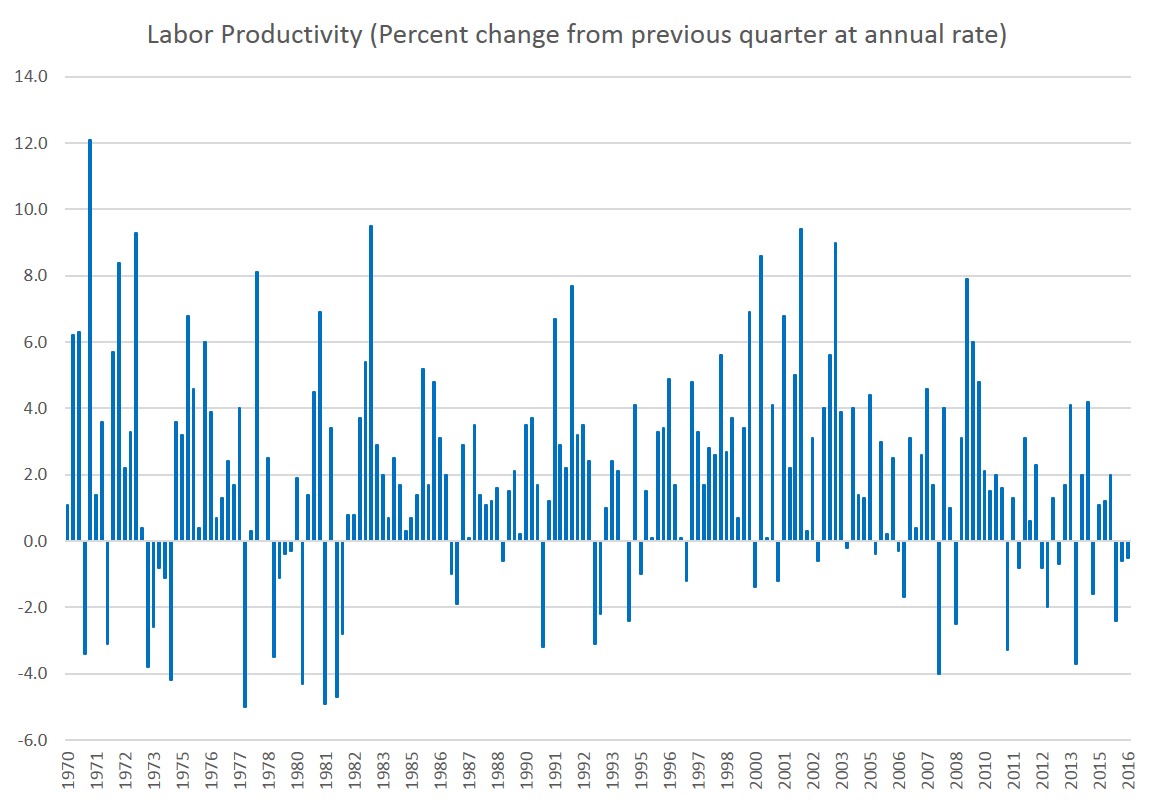 As with any government statistic, this one should be approached with caution, but it's likely not a coincidence that we see poor productivity data in this time series during periods of known economic weakness.

We've already seen in recent days how the current "recovery" is weak and how young workers are staying out of the work force — thus laying the ground work for more stagnant productivity later.

So who can be shocked that the current productivity numbers are some of the worst we've seen since the 1970s?

As we've noted multiple times in the pages of mises.org, if we want to raise wages, the key lies in increasing worker productivity. (See here, here, and here.) Simply decreeing an increase in the minimum wage, for example, will only benefit a select few because only an increase in worker productivity can actually create the conditions that will lead to more wealth being created by workers in general — which translates into higher wages.

Moreover, savings and investment are reinforced by increases in labor productivity. That is, if workers become more productive, they produce more wealth, and this in turn leads to greater availability of resources for saving and investment. And so on.

On the flip side, a society that focuses on consumption at the expense of saving and investment will see a decline in worker productivity as capital ages and becomes less efficient. A consumption-based society, rather than invest in expensive machine tools and training will spend its resources on consumption goods instead. This will lead to fewer loanable funds being available, and less investment in businesses.

Thus, it is likely not a coincidence that business investment shows signs of weakening. The Wall Street Journal reports:

Business investment has been a notable sore spot for the economy in recent months. A closely watched measure of business spending, fixed nonresidential investment, has declined for the past three quarters according to Commerce Department data. A proxy for spending on new equipment, new orders for nondefense capital goods excluding aircraft, has declined on a year-over-year basis almost continuously for the past year and a half.

Naturally, the solution to any worker productivity problem is not on the table for policymakers: reducing regulations that hobble businesses while employing a more sane monetary policy that encourages saving rather than endless consumption.

Why have prices of building materials soared while consumer prices are relatively stable? This is easier to understand once we reject the myth of monetary neutrality and see how price inflation enters the market in different ways.

Can Economics Save Medicine?

Medicine is absolutely poised for incredible entrepreneurial breakthroughs which will revolutionize not only the practice and delivery of medicine, but how we think about health altogether.

The "trickle down" effect is real in how capitalists are motivated to expand affordability of their products and services. Mobile phones and air travel were once just luxuries enjoyed by a select few, but are now widely affordable.

The creation and enforcement of fiat money enables larger and more centralized government. Large government programs become possible that were not possible or sustainable under a market-chosen, sound money standard.

Why Aren't There More Free Market Surgery Centers and Clinics?

Just over twenty-four years ago the Surgery Center of Oklahoma began with a simple mission: deliver the highest quality of care at a reasonable and posted price. They've since faced many obstacles from Uncle Sam and his healthcare cronies.