Keep the Federal Courts Out of the Electoral College

The United States was originally constructed in such a way that the states themselves would dominate the electoral process. Historically, states have determined who can vote, when they vote, and how they vote. Through this power states have also be given limited de facto power of determining citizenship.

RELATED: "In the 19th Century, Non-Citizens Could Vote in 22 States and Territories"

Over time, the federal courts have increasingly seized local prerogatives in t his matter, but even today, states and counties are the primary government organizations that conduct elections, collect the votes, print the ballots, and determine the winners.

This is appropriate, of course, since the United States was intended to function on a confederation model in which it would be up to the states to decide for themselves how they would send representatives to Congress. There is no such thing as a "national election" in the United States because there wasn't supposed to be a single nation.

Unfortunately, in the wake of the 2016 election, opponents of the election's outcome have been petitioning the Supreme Court to step in and take even more power away from the states in deciding how presidents are selected through the Electoral College. Specifically, two electors in Colorado are suing in federal court to overturn a state law that requires members of the electoral college to support the winner of the statewide vote:

The two electors, Polly Baca and Robert Nemanich, are suing to overturn a Colorado law that requires them to support the winner of their statewide popular vote -- Hillary Clinton -- during the general election last month.

In this case, the two electors who are suing are pro-Clinton, and Clinton won the statewide vote in Colorado. So, as electors, they'll be voting for the candidate they supported in the general election anyway. But, they're hoping their lawsuit will lead to the nullification of state laws over the electoral college, which could free up electors in other states. Currently, in addition to Colorado, 28 states and the District of Columbia have adopted laws mandating the electors vote for the winner of the statewide vote. Failure to comply with these mandates, however, generally bring only a fine.

This follows a mandate from the current US Constitution which states in Article II, Section 1 that: "Each State shall appoint, in such Manner as the Legislature thereof may direct, a Number of Electors, equal to the whole Number of Senators and Representatives to which the State may be entitled in the Congress."

In other words, the text is explicit that the state legislature has nearly untrammeled control over how electors are appointed.

Thus, by extension, the state legislature could also be entitled to force electors to legally pledge to support the winner of the statewide vote.

This method would also be reminiscent of methods used prior to the 17th Amendment when members of the legislature were pledged to appoint to the US Senate the winners of statewide votes.

Of course, the method that states use to appoint or bind electors is beside the point. States ought to be free to appoint, manage, remove, or regulate electors totally outside any interference from federal courts, federal regulators, or federal policymakers of any kind. If fifty states employ fifty different methods of assigning electoral votes, this would merely reflect the diversity of the American states.

Were the federal courts to step in and begin regulating states on how they manage their electoral college votes, it would be a significant swing in favor of federal centralization and greater federal power.

The Current System Favors the Democrats

As a final note, we might also look at how the current system of binding electors to the statewide vote in each state actually favors the Democrats. The fact that the state legislatures so often defer to the winner of the statewide vote limits legislative power, and puts electoral votes beyond the reach of the legislature once the votes are counted. This helps the Democrats in a period where the Republicans have an overwhelming advantage at the state-government level. 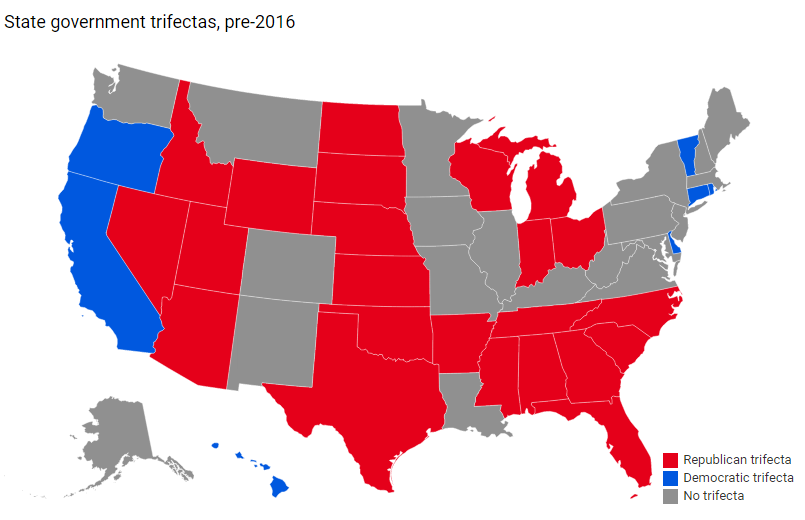 For example, given current party control of state government, were legislatures to reserve to themselves more active control over the electoral college, Republicans would be guaranteed victory in at least  23 states where the GOP has a so-called trifecta — control over all houses of the legislature and the governor's office. This means the GOP would get 248 out of the necessary 270 electoral votes right off the bat. The Democrats by this measure would win 7 states for a total of 86 electoral votes.  Once we add in other states where the GOP controls the legislature but not the governor's office, the GOP easily wins the necessary electoral votes.