The New England Patriots' astonishing come-from-behind Super Bowl victory last night captured the attention of even this decidedly casual fan. The shell-shocked look on Atlanta Falcons coach Dan Quinn at the post-game interview said it all: he couldn't believe what had happened.

But it did happen. Of course it wasn't that New England beat the pregame odds—most betting houses favored them to win by only 3 points—but rather that Atlanta blew such a sizeable lead. Midway through the first quarter, with Quinn's Falcons leading 14-0, one announcer remarked that no team had come back from such a deficit in the Super Bowl. At halftime the score was 21-3, and quickly became 28-3 early in the third quarter. All hope for the Patriots seemed lost, and as a matter of probability hope was lost. As this chart from ESPN shows, by midway through the third quarter the odds of Atlanta prevailing were 99.6%! 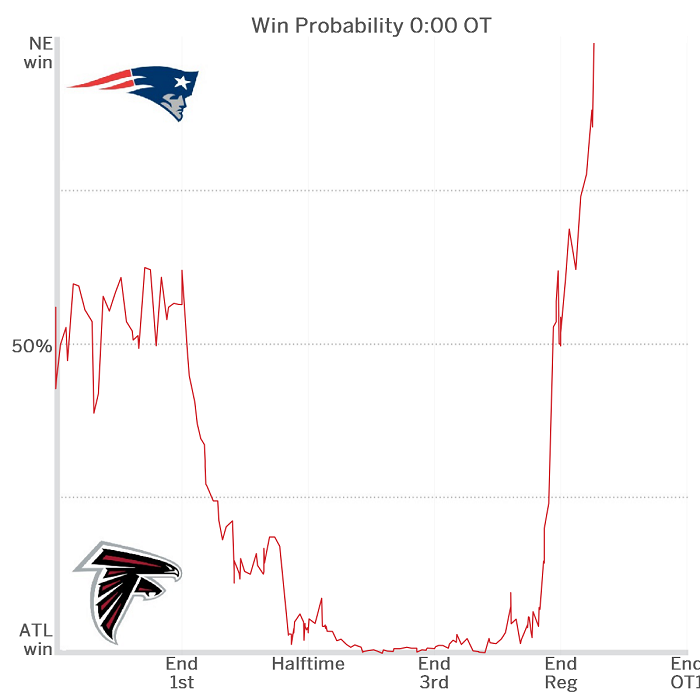 We study probability and statistics for the same reason we study economics: we want to make sense of the world, and perceive what appears to be a random universe through a filter of cognition and experience. Probability is the study of chance. It uses mathematical language to help us make predictions about future events. It asks: what are the odds? Probability theory is what makes sport betting possible, and helps build huge palaces in Las Vegas. But like all mathematical disciplines, its overt application to economics causes a host of thorny problems. Economics is not math, a truism that apparently has to be repeated indefinitely.

Most gamblers and oddsmakers claim to have a "system," some approach they consider rational and effective in reducing randomness. But Ludwig von Mises's brother Richard, a well-known professor of mathematics at Harvard, argued against the possibility of a gambling system. In Mises's view, any sub-sequence of events—say a particular Super Bowl game—takes place within a much larger set of random sequences. At some point the gambler's blindness to the larger context of random events leads him to suckerdom, when the money or the "sure bet" runs out.

"Human action, unlike the movement of stones, is motivated."

Rothbard's quote reminds us of the danger inherent in applying mathematics to human action. What the odds could not account for in yesterday's game, and what could not be expressed mathematically, was the enormous variable of human volition. If Richard von Mises was correct, the randomness in coin tosses and roulette wheels ought to be enough to scare any gambler. But when you include human actors in sporting events (or, say, horses), the variables take on another dimension. How do oddsmakers account for the physical and mental health of the players in a given football game? How do they account for the relative youth or experience of coaching staffs? How about the emotions of Patriot players during halftime, knowing the desperation of their situation? How do oddsmakers assess the tremendous self-confidence of Tom Brady and Bill Belichick, with (then) 4 Super Bowl rings, vs. the nervousness of the upstart Falcons? Or crowd noise? Weather? The list goes on and on. And in many instances the probable outcome in a sporting event, or even the overwhelmingly probable outcome, doesn't happen.

It would be absurd to argue that probability doesn't work in the world of sports betting. Probability theory clearly has an enormous amount of predictive value to sports books, that's why they make money (along with payout fees). But sometimes no amount of number crunching can account for all the variables in just a 22-man football game. So when we take a global economy of 7 billion people, and attempt to apply predictive mathematical models to their behavior, the results aren't always pretty.

Jeff Deist is president of the Mises Institute. He previously worked as a longtime advisor and chief of staff to Congressman Ron Paul. Contact: email; twitter.