The Fed Will Likely Chicken Out on Planned Rate Hikes

The Austrian business cycle theory tells us that the injection of new money created through bank lending out of thin air causes an artificial boom; and that the slowdown of credit and money creation, let alone a decline in available loanable funds, turns the boom into bust. Recent bank lending data in the US show a noticeable slowdown in bank lending rates, setting in around autumn 2016. Does it signal trouble down the road?

There is no easy answer to this question. Various forces are at work. As far as the supply side is concerned, banks may have tightened their lending standards due to higher delinquency rates, restricting access to new loans. Banks may also sell off credit exposure to non-banks such as, for instance, mutual funds, insurance companies etc. Both developments would actually translate into a decline in the level of bank lending aggregates and thus their growth rates. 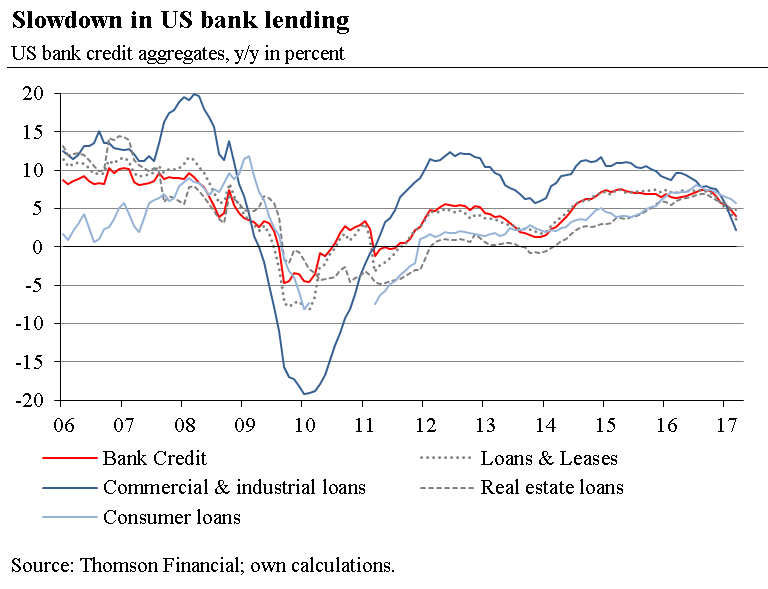 The same holds if and when banks revalue their security portfolio following higher market interest rates. Under a ‘mark-to-market’ accounting, an increase in interest rates reduces the present value of cash flows coming from, say, corporate and government bonds. If and when these securities are included in bank credit aggregates, their reduced market price would also show up in a decline in the growth rate of these lending aggregate.

As far as the demand side is concerned, corporates may increasingly refrain from adding to their debt because they are, due to strong earnings, cash rich at the moment. It is also possible that corporates prefer issuing money and capital market instruments rather than obtaining new bank loans. Again, both developments would make themselves felt in the growth rates of bank lending coming down.

In any case, the analysis of bank credit developments reminds us that the US economy is addicted to the inflow of new money and credit created out of thin air. The latter is, so to speak, the lifeblood that keeps the boom going that has been set into motion by the Fed’s easy monetary policy in the first place. This insight may be illustrated be the chart below, which shows US bank credit and the S&P 500 stock market index since the early 1990. 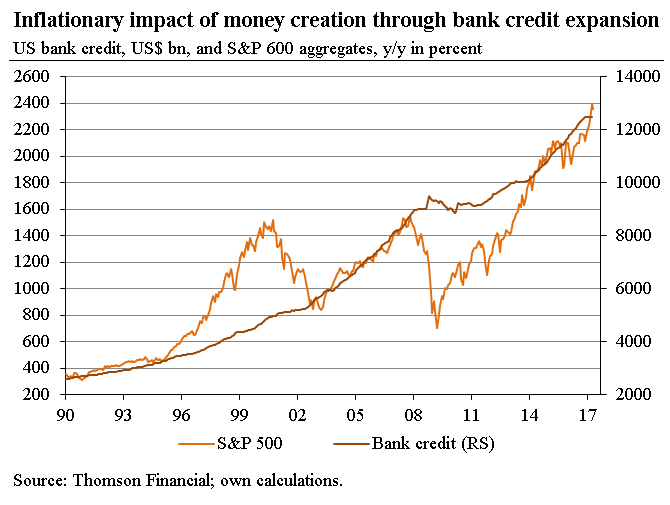 One the one hand, stock prices have been propelled upwards over time by increases in productivity and earnings growth. On the other hand, the injection of new money created through bank lending out of thin air has caused prices, including stock prices, to move up. And not only that. The Fed’s downward manipulation of interest rates has also encouraged business models that can only survive if borrowing rates remain low, or go down further over time.

This is because the issuance of new money through credit creation pushes the market interest rate to below the level it would take if there wasn’t an out of thin air increase in money and credit. The downward interest rate distortion makes firms to embark upon investment projects that wouldn’t have been undertaken under undistorted interest rates, and which can only survive economically if and when interest rates stay artificially low.

The wavelike movement affecting the economic system, the recurrence of periods of boom which are followed by periods of depression, is the unavoidable outcome of the attempts, repeated again and again, to lower the gross market rate of interest by means of credit expansion.

It is Fed that is causing a recurrence of boom and bust. It initiates a boom through its easy money policy. In an attempt to reign in the excess it has created, the Fed at some point turns the boom into bust. To fight the bust it returns to an excessive monetary policy. The result is not only a volatile economy, but also an unsustainable build-up of ever greater amounts of debt on the part of government, consumers and corporates — making the final bust extremely costly.

As if there is joy in repetition, the Fed has again embarked upon a rate hiking cycle, suggesting indeed there is trouble down the road: Looking at the past, the Fed has a track record of having raised rates to the point where it made the credit-fueled boom-and-bubble economy come crashing down, causing great pain for the economy and the financial system. It is fair to say, however, that no one really knows how it will play out this time. 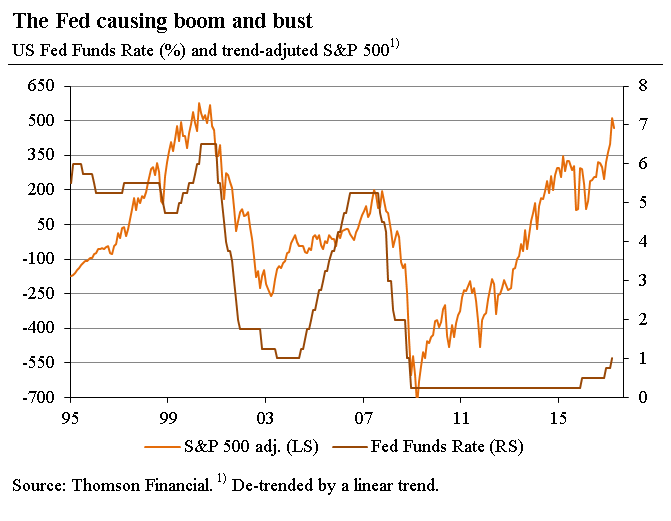 Even if the Fed succeeds in keeping the current boom going and pushing up stock and housing prices for now, however, the circumspect investor should remind himself that a boom will at some point be followed by bust; and that it would be quite short-sighted to, for instance, extrapolate the latest exuberant stock and housing market performance, especially when it has gone on for a while, into the future.

The takeaway from the Austrian monetary business cycle theory is this: Either the boom goes on, and interest rates continue to remain at very low levels. Or interest rates move back to normal, and the boom turns into bust. An ongoing boom, accompanied with a return to normal interest rates, however, is the least likely scenario. If the Fed has learned from its most recent past, it wouldn’t be surprising if US interest rates will remain lower for longer.