The ECB Is Saving the Dollar

There are many risks to the dollar out there, but a more valuable euro isn't one of them.  In a world of free-floating fiat currencies, currency value is mostly relative. Thus, the dollar might have faced stiff competition from the euro if the ECB were not committed to its own version of quantitative easing. In other words, the ECB's devotion to doing "whatever it takes" to keep the easy money flowing has pushed the euro back down to an almost one-to-one exchange rate, after having peaked at nearly $1.60 per euro back in 2008. The euro hasn't fared so poorly against the dollar since 2002. Likewise, the yen, after a few years of gains against the dollar, is back to where it was in 2007 thanks to Abenomics. Certainly, there are geopolitical forces at work trying to undermine the dollar, from the new BRICS bank to Russian-Sino agreements designed to draw people away from the dollar. But it will take a lot of that to overcome the network effects that the dollar still enjoys. This isn't to say that the dollar is not becoming weaker. It is. As other economies grow in importance and international trade becomes less-America-centric, the dollar becomes less important. It's just that the dollar doesn't appear to be at risk of the doomsday scenario or sudden-and-major devaluation as long the other big central banks continue to be motivated by internal politics to the point of monetizing their own debt and devaluing their own currencies even faster than the US.

If and when any major world currency ever does adopt a policy of true monetary stability or quasi-hard-money policy, (as Pat Barron suggests the Germans ought to do), or some major shock causes economies to turn to gold or some other non-government medium of exchange, the dollar will be in sudden and catastrophic trouble. But for now, the dollar's day of reckoning may have been postponed yet again, and for now we may just being looking at more of the same: a continued slow dollar devaluation that robs regular people of their savings for the benefit of the government's favorites. 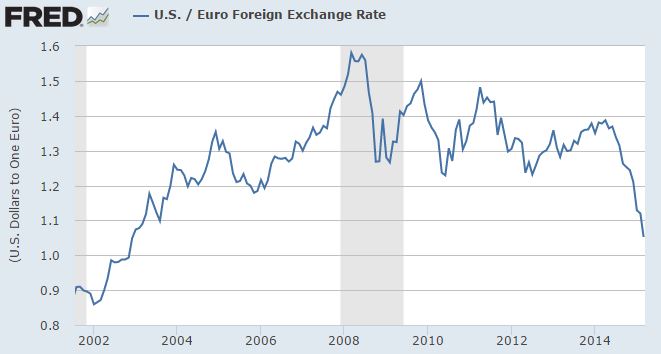