Does a Falling Money Supply Cause Recessions? | Mises Wire
Skip to main content

GET NEWS AND ARTICLES IN YOUR INBOXPrint
A
A
Home | Wire | Does a Falling Money Supply Cause Recessions?

Does a Falling Money Supply Cause Recessions?

In his writings, Milton Friedman blamed central bank policies for causing the Great Depression. According to Friedman, the Federal Reserve failed to pump enough reserves into the banking system to prevent a collapse in the money stock (see Free to Choose). In response to this failure, Friedman argued the money stock M1, which stood at $28.264 billion in October 1929; fell to $19.039 billion by April 1933 – a decline of almost 33%.

As a result of the fall in the money stock economic activity followed suit. By July 1932 year-on-year industrial production fell by over 31%. Also, year-on-year the consumer price index (CPI) had plunged. By October 1932, the CPI fell by 10.7%. 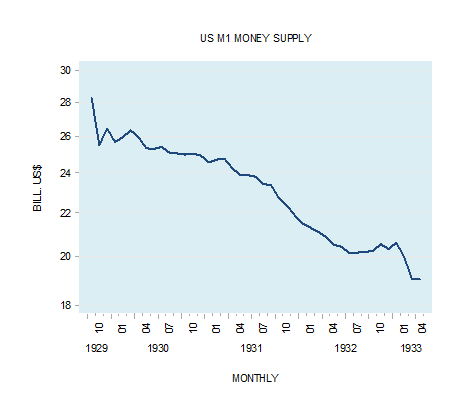 The sharp fall in the money stock — contrary to Friedman — is not indicative of the Federal Reserve’s failure to pump the money supply, however. It is indicative of the shrinking pool of real funding brought about by the previous loose monetary policies of the central bank.

How to Create Wealth

Essentially, the pool of real funding is the quantity of consumer goods available in an economy to support future production.

During the time, he is busy making the tool; the man will not be able to pick any apples. In order to have the tool, therefore, the man must first have enough apples to sustain himself while he is busy making it.

His pool of funding is his means of sustenance for this period-the quantity of apples he has saved for this purpose.

The size of this pool determines whether or not a more sophisticated means of production can be introduced. If it requires one year of work for the man to build this tool, but he has only enough apples saved to sustain him for one month, then the tool will not be built — and the man will not be able to increase his productivity.

The island scenario is complicated by the introduction of multiple individuals who trade with each other and use money. The essence, however, remains the same: the size of the pool of funding sets a brake on the implementation of more productive stages of production.

Trouble erupts whenever the banking system makes it appear that the pool of real funding is larger than it is in reality.

When a central bank expands the money stock, it does not enlarge the pool of funding. It gives rise to the consumption of goods, which is not preceded by production. It leads to less means of sustenance.

As long as the pool of real funding continues to expand, loose monetary policies give the impression that it actually the key factor in the economic growth. That this is not the case becomes apparent as soon as the pool of real funding begins to stagnate or shrink. Once this happens, the economy begins its downward plunge. The most aggressive loosening of money will not reverse the plunge (for money cannot replace apples).

The introduction of money and lending to our analysis will not alter the fact that the subject matter remains the pool of means of sustenance.

What a Central Bank Means for Wealth-Creation

The existence of the central bank and fractional reserve banking permits commercial banks to generate credit, which is not backed up by real funding i.e. credit out of "thin air." Once the unbacked credit is generated it creates activities that the free market would never approve, i.e. these activities are consuming and not producing real wealth. As long as the pool of real funding is expanding and banks are eager to expand credit various false activities continue to prosper.

Whenever the extensive creation of credit out of "thin air" lifts the pace of real-wealth consumption above the pace of real-wealth production this starts to undermine the pool of real funding. Consequently, the performance of various activities starts to deteriorate and bank’s bad loans start to rise. In response to this, banks curtail their loans and this in turn sets in motion a decline in the money stock. Does the every curtailment of lending causes the decline in the money stock?

On the maturity date Mark repays the bank $1000 plus interest. Bank X in turn after deducting its fees returns the original money plus interest to Tom. So what we have here is that Tom lends i.e. gives up for three months the ownership over $1000. He transfers the $1000 through the mediation of Bank X to Mark.

On the maturity date Mark repays the money to Bank X - the Bank X in turn transfers the $1000 to Tom. Observe that in this case existent money moved from Tom to Mark and then back to Tom via the mediation of Bank X – the lending is fully backed up here by $1000. Obviously the $1000 here doesn’t disappear once the loan is repaid to the bank and in turn to Tom.

Things are, however, completely different when Bank X lends money out of thin air. How does this works? For instance, Tom exercises his demand for money by holding some of his money in his pocket and $1000 he keeps in the Bank X demand deposit. By placing $1000 in a demand deposit he maintains total claim on the $1000.

How the Troubles Begin

Obviously if the bank is continuously renewing its lending out of thin air then the stock of money will not fall. Observe that only credit that is not backed up by money proper can disappear into the thin air, which in turn causes the shrinkage in the stock of money.

In other words, the existence of fractional reserve banking (banks creating several claims on a given dollar) is the key instrument as far as money disappearance is concerned. However, it is not the cause of the disappearance of money as such. There must be a reason why banks don't renew lending out of thin air.

The main reason is the severe erosion of real wealth that makes it much harder to find good quality borrowers. This in turn means that monetary deflation is on account of prior inflation that has diluted the pool of real funding. It follows then that a fall in the money stock is just a symptom as it were. The fall in the money stock reveals the damage caused by monetary inflation but it however has nothing to do with the damage.

Additionally, as a result of the fall in money various activities that sprang up on the back of the previously expanding money now find it hard going.

It is those non-wealth generating activities that end up having the most difficulties in serving their debt since these activities were never generating any real wealth and were really supported or funded, so to speak, by genuine wealth generators. With the fall in money out of thin air their support is cut-off.

Contrary to the popular view then, a fall in the money supply i.e. money out of 'thin air', is precisely what is needed to set in motion the build-up of real wealth and a revitalising of the economy.

Printing money only inflicts more damage and therefore should never be considered as a means to help the economy.

We're All Talking about Inflation, but Deflation May Also Be on the Way

When prices fall as a result of rising wealth that's good news. But deflation is also good news when it follows the bursting of a financial bubble caused by money creation.

Gary Galles has in this outstanding book shown how to apply basic economic principles: he can convey free market principles in a simple and memorable way; and he also has a detailed knowledge of the policies he analyzes.

"Going Cashless" Isn't as Easy as It Seems

The fact that various electronic money transfers are taking place does not mean that we do not require cash any...

Contrary to popular thinking, there is no such thing as a price level that should be stabilized by the central bank...