GET NEWS AND ARTICLES IN YOUR INBOXPrint
A
A
Home | Wire | Austrian Money Metric: Money Supply Growth Rate Holding Steady

The "true money supply" measure is a measure of the money supply pioneered by Murray Rothbard and Joseph Salerno and is designed to provide a better measure than M2. The Mises Institute now offers monthly updates on the TMS metric and its growth.

Last month, money supply growth rebounded somewhat to eight percent after hitting a seven-year low in October. In January, the true money supply was up 8.2 percent, year over year, which means it continues to hover around eight percent, where it has largely been for the past two years.

Over the same period, M2 increased 5.9 percent, which means that like TMS, M2 growth has generally been holding steady for the past two years: 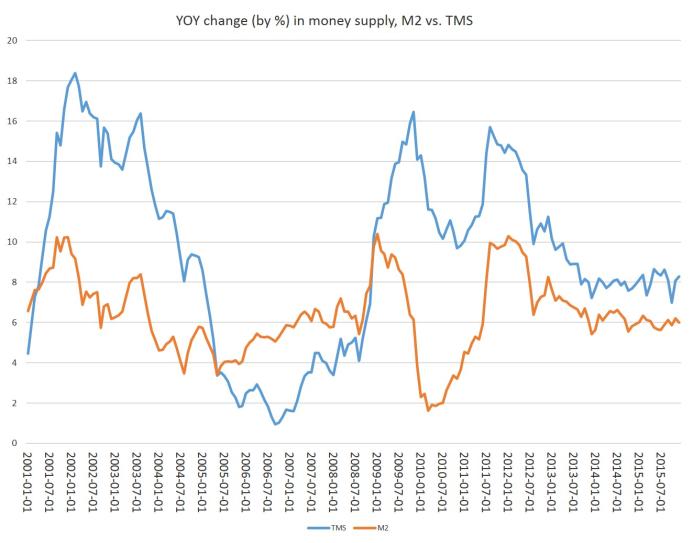 In the TMS measure, total money supply was buoyed by increases in treasury deposits at the fed. In fact, in December, treasury deposits — which have been at historic highs since 2008 —  hit an all time high in December, coming in at $237 billion. Nowadays, the Treasury uses deposits at the Fed as a type of cash management system to make sure it has cash reserves in case of Congressional gridlock over spending. The latest surge in Treasury deposits may reflect the recent $1.1 trillion budget deal between Democrat and GOP leaders. It also helps pave the way for easy access to Treasury funds in case of a need for bailouts or other "emergency" spending. 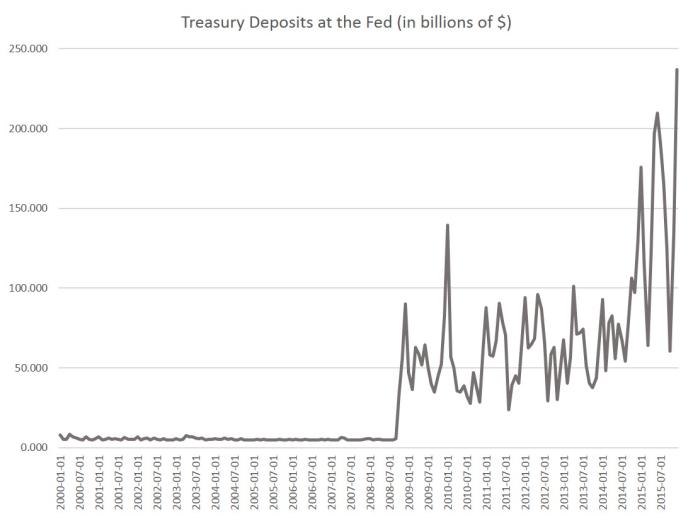 M2, on the other hand, might have grown more were it not for continued declines in small time deposits which have withered as interest rates continue at near zero levels. It remains to be seen if the Fed's recent rate hike will reverse this trend. Right now, small time deposits are at the lowest level they've been since June of 1977:

Historically, small time deposits have tended to increase in periods of economic expansion or growing interest rates. The post-2009 expansion is the first non-recessionary period in decades that has not seen year-over-year growth in small time deposits, perhaps reflecting a general flight toward riskier  investments in search of interest income, and perhaps declining savings as well: 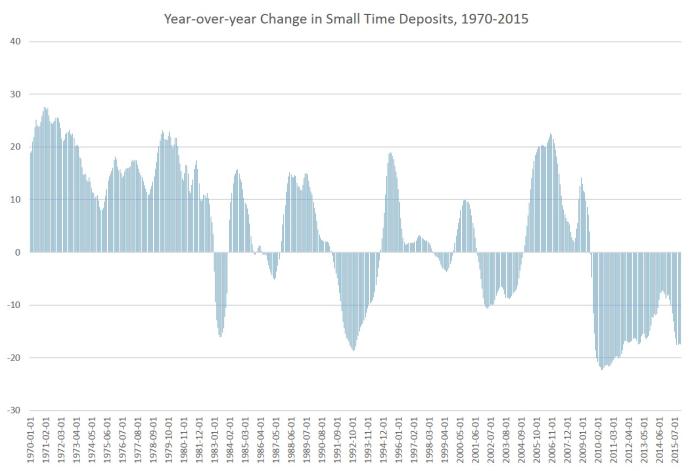 Small time deposits are not included in the TMS, however, as they are not immediately spendable, and do not qualify as money in the Austrian definition.

Ryan McMaken (@ryanmcmaken) is a senior editor at the Mises Institute. Send him your article submissions for Mises Wire and The Austrian, but read article guidelines first. Ryan has degrees in economics and political science from the University of Colorado, and was the economist for the Colorado Division of Housing from 2009 to 2014. He is the author of Commie Cowboys: The Bourgeoisie and the Nation-State in the Western Genre.

Secession in Virginia Would Defuse the State's Conflict over Guns

If opponents of the current ideological winds blowing in Virginia find themselves in a permanent minority, it may very well be that the only method of defending the minority position is by leaving the state. But "exit" can theoretically be obtained in more than one way.

Why "One Man, One Vote" Doesn't Work

Efforts to abolish the US Senate because it's "undemocratic" employ a very crude and dangerous type of majoritarianism.

The Majority of Virginia Homicides Come from Only Two Metro Areas

Just two metro areas in Virginia reported more homicides than all the rest of the state combined.

Liberalism conceives of freedom as the absence of constraint, but Hegel's definition is more expansive. And, of course, the state is a necessary condition for it.