Auditing the Fed Is Now More Important than Ever

Last week, the House Committee on Oversight and Government Reform approved a bill submitted by Thomas Massie (R-KY) to allow Congress to audit the Federal Reserve. The bill was originally introduced by Ron Paul in 2009 and was passed in the House twice (2012 and 2014), but failed to pass in the Senate.

The Obama administration, Fed chair Bernanke, and Treasury Secretary Geithner “vigorously opposed” the bill in 2009. Conditions are different today. President Trump tweeted in favor of the move during his campaign and now Republicans have a slight majority in the Senate.

Even in a highly polarized political environment today, the current bill has bipartisan support, as did the previous versions, though support is mainly from Republicans.

Massie explains his support for auditing the Fed in his press release:

“The American public deserves more insight into the practices of the Federal Reserve,” Massie said. “Behind closed doors, the Fed crafts monetary policy that will continue to devalue our currency, slow economic growth, and make life harder for the poor and middle class...”

“It is time to force the Federal Reserve to operate by the same standards of transparency and accountability to the taxpayers that we should demand of all government agencies.”

The bill still faces some obstacles going forward, however. The current Treasury Secretary, Steven Mnuchin, has said, “I endorse the increased transparency we have seen from the Federal Reserve Board over recent years.” And, “the Federal Reserve is organized with sufficient independence to conduct monetary policy.” Current Fed chair Janet Yellen, like her predecessor, also opposes any public audit of the Fed’s inner workings.

The “increased transparency” to which Mnuchin refers may be the annual audited financial statements and the unaudited balance sheet developments. Both, however, are not very detailed when it comes to the Fed’s interaction with foreign governments and central banks, a concern for proponents of auditing the Fed. One such example of vague, rounded, unaudited, and possibly incomplete reporting is in the table below. 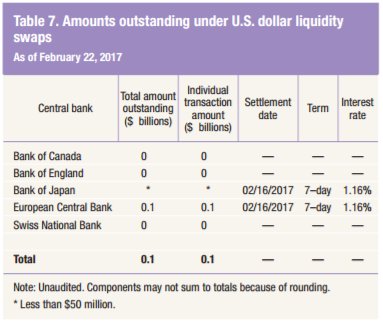 As another example, the New York Fed exercises special authority in foreign currency working balances and foreign exchange contracts between foreign central banks and US official institution customers. According to one of the audited reports, “These foreign currency working balances and contracts are not related to the FRBNY's monetary policy operations.” And, in the financial statements, these assets and income earned are reported as “Other.” Audit the Fed proponents want to know the who, the why, and the how much for dealings like this, in greater detail and with more accountability than one number in an “Other” column.

There is even less public knowledge about what is said in the secret FOMC meetings where monetary policy with global ramifications is decided on by a small group of people. Minutes are released after five years, when the actual members of the FOMC may be very different, and when nothing of consequence can be done.

Monetary policy has become unhinged since the most recent financial crisis and recession. The Fed’s balance sheet has exploded to unprecedented levels. They began purchasing assets besides government debt, like mortgage-backed securities. Their key targeted rate, the Federal Funds Rate, hit the zero lower bound and has stayed at the bottom or near it ever since. For extra control on the Federal Funds Rate and the flow of new money into broader circulation, they began paying interest on excess reserves.

All of these decisions were made in secret with no accountability to any other body. Some say these actions saved the US economy and that we are on a new sustainable growth path. Others say that these actions have only paved the way for another bust. Whatever the truth is (certainly the latter, in my opinion), auditing the Fed and gaining information from their policy deliberations can at the very least open up the debate.

Perhaps those who are against a Fed audit are worried that if the curtain is pulled back, people will see that, behind all of the technical jargon, high-powered macroeconomic models, and fancy policy tools, the Fed’s monetary policy is really just two buttons. One increases the money supply, expands credit, and artificially lowers interest rates. The other does the opposite. The public may finally see that for all of the pomp and circumstance, the Fed is really just a price control agency and that the price they control (interest rates) has huge and far-reaching effects throughout the economy. Tinkering with the price of wheat might create breadlines, but tinkering with interest rates creates housing bubbles, overconsumption, capital misallocations, and the boom-bust cycle.

Finally, many but not all of the Audit the Fed bill proponents view it as a first step toward ending the Fed. Proponents of central banking claim that it smooths business cycles and protects citizens from a chaotic financial system. The Fed has certainly failed with these goals, and even a quick look at historical employment and price level data shows that it has failed at its dual mandate from Congress. In light of these failures, Congress should take another look at the institution it created with a thorough audit and hopefully reconsider its very existence.