Are You Exploiting Others By Having a Job? | Mises Wire
Skip to main content

GET NEWS AND ARTICLES IN YOUR INBOXPrint
A
A
Home | Wire | Are You Exploiting Others By Having a Job?

Are You Exploiting Others By Having a Job?

Somewhere along the line, Americans (and possibly others) began to suffer from the idea that starting a business and serving customers involves taking something out of the community. This likely goes back to 19th century Marxist ideas of exploitation, but in its watered-down American form, it leads to a whole host of bizarre theories in which a person is doing something wrong by working for a living or running a business in a community. In a recent letter to the Slate advice columnist, one woman agonizes over the fact that, in spite of having a trust fund, she likes to work for a living:

Q. Poor Little Rich Girl: I come from a well-to-do family. Not the Hiltons, but I have a trust fund that means I really don’t have to work if I don’t want to. But I wanted to do something with my life, so I got a degree in a health-related field (not nursing) and love my job. I also think I’m very good at it. The trouble is that when I took my first job, I promised myself that if I ever thought my working would cost somebody else his or her job, I would quit. I don’t need the money I earn to exist, but I know most other people do. Now my hospital is looking at cutbacks, and our department is being singled out. Ordinarily I would just quit so the decision is made for the higher-ups. But there are four of us on staff, and one person, a relatively new hire, isn’t all that great at her job. Her people skills are nonexistent, and it doesn’t sound like she even likes her patients. I don’t want to quit so she can keep her job. Is this wrong?

This unfortunate woman has managed to indulge in at least two economic errors at once.

1. Success in the marketplace is a zero-sum game.

2. Having a job is a one-way street in which one extracts resources from one's employers, and possibly from one's customers too.

The Trust Funder should look at her employment his way:

She appears to view her taking a job as a net loss to others. But, in a functioning marketplace, employment doesn't work that way. In this case, the Trust Funder has offered services to an employer, and the employer has happily accepted them. Other employees then benefit from the Trust Funder's competence, because a company with better employees tends to grow and raise wages. Moreover, other competent workers in her field will have a more enjoyable work life since working with other competent workers is more rewarding both in terms of money and intangibles, than is working with incompetents.

Moreover, job markets are not hermetically sealed chambers where no one may enter or leave, and everything outside the industry is darkness and pain. Those who cannot compete in a certain industry enter other industries or related ones.

It is good that the Trust Funder is conflicted here. She understands, in spite of her poor education in economics, that on some level her patients (i.e., customers) benefit from her competence. It's impossible to see how leaving her job to a less competent worker would benefit either her employer or the patients. But, it appears all this time that the Trust Funder has fixated on this idea that the only way she can add value to the community is to get out of the way of other people who want her job. She should poll her patients and ask them if they would rather be served by a more competent professional or a less competent one.

The "Giving Back to the Community" Thesis

These sorts of strange thought processes in which having a job leads to one feeling guilty are also related to the idea of "giving back" to a community in which one serves customers.

We so often hear of business owners and successful people in general saying how they must "give something back" to the community, as if working for decades to provide a service to people in a community involved exploiting them somehow.

Since I come from a Mexican-American family, I have (stereotypically) had more than one relative who has been involved in the Mexican-restaurant business. My grandfather, for example, sold beer to Mexican restaurants for the Cerveceria Cuauhtémoc Moctezuma, during a post-war boom in Mexican restaurants in southern California. In addition to this, he and my grandmother, (also stereotypically) owned a convenience store in Los Angeles. For years, they worked six day weeks running the business, and provided both products and job opportunities to members of the community, many of whom had perhaps faced discrimination and refusals of service from Anglo employers and salesmen.

By the "giving back" thesis, however, I'm expected to believe that by doing these jobs, these business owners and salespeople were somehow taking wealth out of the community (possibly illicitly), and that they were exploiting local workers and shoppers. The convenience, value, and entertainment created by their products, which they brought to the market through their own labor, is to be considered of little value by this way of thinking.

All the workers who enjoyed a beer after work in a restaurant; all the families who enjoyed a night out together; all the kids who bought a snack on the way home from school; all the families that ran down to the shop for a loaf of bread — they were being exploited, we must conclude, if we subscribe to the idea that commercial activity is a zero sum activity with an exploiter and a victim.

Thanks to subjective-value theory and numerous other insights of the Austrians, we know that this way of thinking is both wrong and dangerous. In fact, it leads to situations like the Trust Funder's in which employers and patients are potentially being deprived of a competent workers, because the worker thinks that having a job is taking something away from others.

In reality, every employee who serves customers and employer well, and every small businessman or entrepreneur who attempts to bring affordable goods and services to a community, adds to the community. Thee is no exploitation, and there is no zero-sum game.

My grandparents in 1946, while on a break from looting the local community: 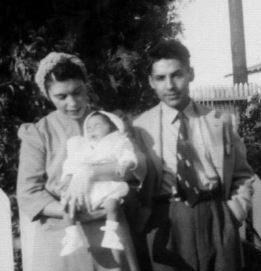 Petrou's new book on monetary policy details how the Fed's turn toward QE and ultralow interest rates have done wonders for billionaires while impoverishing millions of ordinary people.