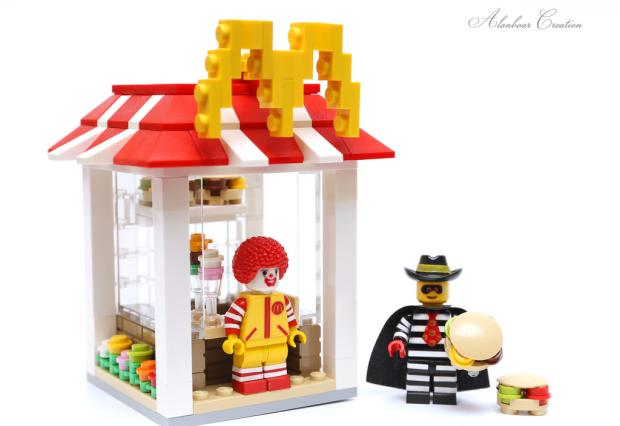 Today in stupid lawsuits we have two Florida men suing McDonalds for not giving them a discount for asking for a Quarter Pounder with Cheese without the cheese. They are asking for $5 million in damages.

As the Miami Herald reports:

The suit claims, "customers have been...

Today in stupid lawsuits we have two Florida men suing McDonalds for not giving them a discount for asking for a Quarter Pounder with Cheese without the cheese. They are asking for $5 million in damages.

As the Miami Herald reports:

The suit claims, "customers have been forced, and continue to be overcharged for these products, by being forced to pay for two slices of cheese, which they do not want, order, or receive, to be able to purchase their desired product."

Having to pay for cheese they do not receive because they asked that it be held off of the burgers, well, they are not "lovin' it," to borrow from McDonald's current slogan....

According to Lavin's suit, Kissner and Werner "have suffered injury as a result of their purchases because they were overcharged, and were required to pay for cheese, which is not a component of either a Quarter Pounder or a Double Quarter Pounder, that they did not want and did not receive."

As absurd as the lawsuit is, there is a worthwhile economics lesson here. The case is clearly grounded in the idea of a Cost Theory of Value, which basically viewed the price of goods as the result of combining the cost of production with enough profit to make the entire venture worthwhile. In the view of Mr. Kissner and Mr. Werner, the fact they are asking for a sandwich requiring one less factor of production means that McDonalds is now wrongly profiting more from their order than a fellow customer who likes their cheese.

If McDonalds is in need of an expert to debunk this argument, I would suggest Bob Murphy.

As he explained in his excellent article Problems with the Cost Theory of Value:

"Costs" are prices too. To "explain" the price of a $10,000 car by reference to the prices of the engine, tires, glass, and so on, doesn't really explain market prices per se. At best, it pushes back the explanation one step: Why does the engine have a price of $5,000, etc.?

Even on its own terms, the cost theory of value (at least as I have summarized it above) acknowledges that the present day "spot" price of a good is determined by something other than the costs of its production. The theory explicitly deals with the cases where the actual market price is either higher or lower than the long-run "anchor" price set by the cost theory, and tries to explain the forces that would move those "aberrational" prices back toward the long-run "natural" price.

The classical economists weren't dummies. They understood that a sudden urge among the public to buy more of a certain good would lead to an immediate increase in its price. But the cost theory could only comment on this situation by saying that the market would tend toward a restoration of the same rate of profit in the industry through an increase in production to match the increased demand.

In other words, the cost theory of value could explain the long-run target toward which the day-to-day spot prices would tend. The cost theory could not explain what actually formed those spot prices on any given day.

Because the cost theory couldn't explain how actual market prices were formed "from scratch," it was useless when it came to non-reproducible goods. Obviously the price of the Mona Lisa, or of an original Shakespeare manuscript, would have nothing to do with the cost of producing these masterpieces.

Here we see the methodological problem of the cost theory: By explaining final retail prices through the cost of making the goods, the cost theory implies that economic value is an objective property of physical items that flows from resources into the goods that they produce. In contrast, the subjective value theory of Menger and others starts with the valuation of consumer goods and works its way back through the prices of labor and other inputs accordingly.

When a consumer is deciding on a purchase, the cost of producing the item is usually irrelevant. For example, going along with our hypothetical example above, if a new company decided to use twice as many resources to make an equivalent car, it couldn't charge $20,000 simply because "that's how much it cost."

For a different example, if a farmer discovers a meteorite chock full of gold on his property, he will charge whatever the market will bear for it. He won't sell it for less than other gold producers on account of his virtually zero cost of production.

To put it simply, the fact these Florida Men purchased their Double Quarter Pounder without Cheese shows that they thought the sandwich was worth the price they paid for it. If not, they wouldn't have ordered it. That it costs the store slightly less to make that sandwich than others is entirely irrelevant, which explains why profit margins vary widely on the McDonalds menu.

In a court battle that has apparently been working itself out for 17 years, the Quebec High Court this week affirmed that a law establishing a simple majority as key in triggering secession talks with the Canadian government — known as Bill 99 — is sound:

In a court battle that has apparently been working itself out for 17 years, the Quebec High Court this week affirmed that a law establishing a simple majority as key in triggering secession talks with the Canadian government — known as Bill 99 — is sound:

The law was passed in 2000 by then-premier [of Quebec] Lucien Bouchard as a response to the federal government's Clarity Act, which defines how a province can secede from the federation. It [the Clarity Act] famously called for a "clear" majority in a referendum, without specifying what that meant, prompting endless debates about whether 50 per cent plus one would suffice to trigger sovereignty negotiations.

In its preamble, Bill 99 describes the Clarity Act as an intrusion into Quebec's democratic institutions. It declared that no government can "impose constraints on the democratic will of the Quebec people."

Bill 99 also contains a clause stating that a simple majority is enough to win any referendum held by the Quebec government.

The Court sought to quell theories that the Quebec government was attempting to pass a law that allowed for unilateral secession. The simple majority necessary for secession talks, the Court concluded, is Constitutional, although, the vote, by itself, is not sufficient to fully execute a withdrawal from the Canadian confederation. Withdrawal would require negotiations with the federal government.

The significance of the case stems from the fact that the federal government's Clarity Act is ambiguous as to how much of a majority was necessary to indicate a pro-secession vote from provincial voters. In other words, the Act appeared to allow the federal government to determine, perhaps after the fact, if a pro-secession majority  vote in a province is a large enough majority.

The new Court decision affirms that a simple majority is sufficient and limits the federal government's attempts to hedge its bets with language about what constitutes a "clear majority."