GET NEWS AND ARTICLES IN YOUR INBOXPrint
A
A
Home | Mises Library | Will Foreign Loans Make Us Rich?

Will Foreign Loans Make Us Rich? 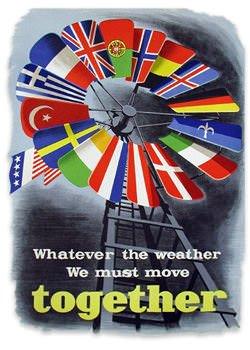 Henry Hazlitt had left the New York Times in an ideological disagreement over postwar economic policy. Once he left, he was free to speak his mind on the important issues of the day, among which was the Marshall Plan. Arguing against the idea of putting postwar Europe on the US dole, Hazlitt made the case that aid would forestall rather than generate economic recovery.]

One of a number of posters created by the Economic Cooperation Administration, an agency of the US government, to sell the Marshall Plan in Europe.

Note the pivotal position of the American flag.

More and more the strange idea is being put forward that America must make loans or gifts to foreign countries, not primarily to save them, but to save itself. We are told that our government must make these gifts or loans not as a humane or charitable duty but out of shrewd self-interest. Newspaper commentators in the recipient countries have more and more been interpreting our government's generosity to them on this theory. As early as June 25, 1947, Pravda declared that the Marshall plan was influenced by a desire to prolong a postwar "boom in the United States" and to "lessen the ripening economic crisis" here.

That Communist Russia should hold such a view is not surprising. It fits in perfectly with all the other claptrap that Communists have long preached about capitalism. But the theory is just as eagerly embraced elsewhere.

In its issue of July 12, 1946, the Eastern Economist of New Delhi put it forward in its most naked form:

"The U.S. Lend-lease plan of helping the Allies in the recent war has been acclaimed as an act of unparalleled generosity," it said.

But it was also a brilliant and ingenious way of solving what would otherwise have been an intractable problem.… The productive power of America has multiplied itself so fast that it is now admitted that she cannot continue to give 60 million jobs unless she is able to have a large export trade.… In such circumstances it would not be such a foolish thing (as some might imagine) to give away goods to other countries, for on balance it would be better to part with surplus goods than to create unemployment.… Machinery would be set up by America whose purpose would be to provide gifts of loans to countries.… The U.S. Government will buy the goods, give them as gifts and reimburse itself by additional internal taxation.… If this is to play the world's Santa Claus, the United States of America is both rich enough and should have sense enough to fill the role.

This idea, in both crude and sophisticated guise, has been endlessly repeated in the French and British press.

That this idea should exist so strongly in the countries that wish to get more American loans and gifts is not surprising. What is much more strange is to find it endorsed by some American businessmen and even by some American economists.

Yet it is unadulterated nonsense.

If it were true that we could create prosperity merely by making goods to give away, then we would not have to give them to foreign countries. We could accomplish the same result by making the goods to dump into the sea. Or the federal government could order the goods made to be given away to the poor in our own country. It could furnish them with free overcoats, free lunches, and free automobiles; order any amount of new housing built, turn it over to them, and finance it by inflation or add it to the American taxpayer's bill. Simplest of all, it could turn over directly to American lower-income groups additional money taken from the taxpayers and let them buy with it whatever they themselves wanted. The goods, at least, would then remain in this country. Why confuse the issue by bringing in foreign nations and foreign trade?

It ought to be clear to the poorest intelligence that nobody can get rich by giving his goods away. What seems to confuse otherwise intelligent people when this proposition is applied to a nation instead of an individual, however, is the fact that it is possible for particular firms and persons within the nation to profit by such a transaction at the expense of all the rest. It is true, for example, that persons engaged exclusively or chiefly in export business might gain on net balance as a result of bad loans made abroad. The exporter might profit at first by additional foreign sales. But if the foreign loan is not repaid, then those who make it lose the money. If it is a government loan, then the loss must be made good out of increased taxes on every American. American consumers will then have just that much less money left with which to buy American goods. For every extra dollar that the foreign buyers had been given to buy such goods, in other words, domestic buyers would ultimately have one dollar less. Businesses that depend on domestic trade would therefore be hurt in the long run at least as much as those engaged primarily in export business had been helped. Considered individually, American consumers would be impoverished by higher taxes. And considered collectively, the country would be poorer by the amount of goods it had given away.

So many confusions exist about foreign trade that it is possible here to call attention only to one or two of them that bear immediately upon the present issue. One frequent fallacy, for example, which is implied in the foregoing quotation from the Eastern Economist, is that the United States produces "a surplus above its own needs" and must find an "outlet" for this "surplus." Nothing, of course, would be more foolish than for a country continually to produce more than it needed. From the standpoint of the nation as a whole, exports are produced to pay for imports. A nation with a permanent surplus of exports (including both "visible" and "invisible" items) would be merely a nation that was giving its goods away.

Wherever the most effective division of labor exists, wherever a nation devotes itself to producing what it can produce better, cheaper, or more efficiently than other nations, and is content to buy from others in turn the things that they can make cheaper, foreign trade follows as a matter of course. But it is a fallacy to suppose that a large export trade is in itself necessary to "provide employment" or to give "60 million jobs." If some of these jobs make exports that are not ultimately balanced by imports, then the labor is merely being thrown away. It is like a huge WPA project, with the added disadvantage that whatever is produced by the work goes to foreign countries instead of remaining at home. If, on the other hand, the exports are balanced either immediately or ultimately by imports, then as many American jobs are "lost," or kept from coming into existence, by buying the imports (instead of home-produced goods) as were "created" in the first place by the exports. In an autarkic economy, the jobs that are lost by lack of exports are offset by the jobs provided to make substitutes for the goods that would otherwise be imported. It is not employment that suffers, but efficiency and consumer satisfaction. A sound two-way foreign trade is important from the standpoint of the efficient world division of labor and the maximum creation of wealth; but it is in the long run irrelevant from the standpoint of "providing employment."

It is true, however, that changes in foreign trade, and temporary export or import surpluses (using "exports" and "imports" broadly, to include all goods and services) are important from the standpoint of employment and business activity. An excess of exports, other things being equal, is "inflationary"; and an excess of imports is "deflationary." That is to say, an excess of exports, by making goods at home scarcer than otherwise, tends to raise home prices, while an excess of imports, by making goods more plentiful than otherwise, tends to lower home prices.

In a speech on May 8, 1947, Dean Acheson, undersecretary of state, estimated that our annual exports of goods and services to the rest of the world during 1947 would total $16 billion, an all-time peacetime high, compared with annual exports of about $4 billion before the war. Against this, he said, we were expected to import only about $8 billion of goods and services. A later estimate, in the Midyear Economic Report of the President, published on July 21, gave a much larger figure of the export surplus:

The goods and services we provided to other countries [during the first half of 1947] ran ahead of what they provided to us at the rate of 12.7 billion dollars a year.

Now except for that part of it which is financed out of immediate taxation, this export surplus of $12 billion a year is inflationary. It means that we are paying out $12 billion a year in wages, salaries, and profits for goods and services that we do not get. It adds $12 billion to the excess purchasing power competing for the goods that are left. We are increasing the volume of money incomes in relation to the goods produced for domestic consumption.

This article is excerpted from Will Dollars Save the World? (1947), chapter 6, "Will Foreign Loans Make Us Rich?"