GET NEWS AND ARTICLES IN YOUR INBOXPrint
A
A
Home | Mises Library | What Happened to Katrina Aid?

What Happened to Katrina Aid? 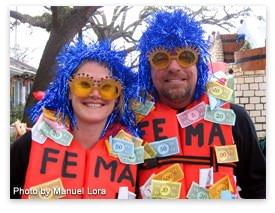 A recent story out of New Orleans sheds light on the inefficiency of socialist "charity." Not only was FEMA unable to cater to people's needs when they needed trailers, but now just the opposite is happening. Homeowners who have repaired their houses are having difficulty returning the trailers to FEMA. The agency, overwhelmed, is unable to inspect the trailers and assign them to other families. But the story does not end there. Homeowners cannot legally move the trailer off their property. They require a towing license. So while there are people still waiting for a trailer, others have a perfectly good available trailer that they are unable to get rid of. Even with a budget of billions of dollars, government agencies simply cannot do things efficiently; FEMA is not matching demand with supply.

The situation with financial help is no different. A US Government Accountability Office report has concluded that people are spending their FEMA money for non-emergency purchases. For example, many have used the funds for guns, alcohol, jewelry and gambling. A charitable organization, unlike the government, has to risk its own assets. If it decides that a particular family needs aid, it could verify that the goods and services provided are used for emergency and immediate needs only. There is an incentive to save resources so that others can also be helped. Charity cannot be managed bureaucratically; it must be efficient or face the consequences: the loss of money, reputation and future donors. While dishonest behavior would still arise under private charities, they would learn from their mistakes and continually improve their practices. The government, however, has to go through bureaucratic processes before it can improve: meetings, investigations, reports, witnesses, depositions, accusations, and other headache-inducing proceedings.

The bureaucrat is not in the business of making money by satisfying consumer demand. He is not in a business at all! The funds entrusted to him are the result of the taxpayer's productivity. He faces no risk of loss and thus can waste our money with impunity. Consider Mises's great definition of bureaucratic management:

"Bureaucratic management is the method applied in the conduct of administrative affairs the results of which has no cash value on the market. Remember: We do not say that a successful handling of public affairs has no value, but that it has no price on the market, that its value cannot be realized in a market transaction and consequently cannot be expressed in terms of money."

Indeed, what Katrina victims needed the most was a method of quickly and spontaneously assessing priorities. This can be best achieved through a market process, where needs are expressed in terms of money and where the dynamic fluctuations of price are the result of consumers and producers seeking to improve their state of affairs. If there is a decrease in the supply of housing or water or food, then prices will rise to reflect that change. Higher prices encourage entrepreneurs to increase the supply, satisfying the increased demand. As the needs are satisfied and demand lowers, so do prices and then the crisis is over. Sadly, the Katrina aid did not follow a market process. It was a free-for-all stampede of unconditional gifts on behalf of the government. Consequently, things turned ugly.

An  MSNBC analysis tells us that "investigators studied more than 200 cases, and say in 70 percent of them aid recipients gave bogus Social Security numbers — numbers that belonged to dead people, to someone else or to no one at all. And when investigators checked out addresses given in these cases, about 40 percent were bogus — vacant lots or nonexistent apartments." Moreover, up to 900,000 of the 2.5 million applications were fraudulent. These are not just random events but deeply ingrained symptoms of government management.

A similar news report reveals just how widespread the abuses were:

There was little or no verification of the names, addresses or Social Security numbers of applicants registering by phone or the Internet for the $2,000 in aid, resulting in thousands of checks issued to those with duplicate or bogus information.

Duplicate payments were made to about 5,000 of the nearly 11,000 debit card recipients who received Katrina aid, first with debit cards and then again via electronic bank transfer.

Although FEMA says it bought 114,341 trailers for $1.7 billion, discrepancies abound in FEMA's documentation of the number ordered, received and occupied, making it difficult to ascertain the exact units available or whether government-owned property was otherwise accounted for.

FEMA may have bought too many temporary homes — 24,967 manufactured homes obtained for $857.8 million and 1,295 modular homes at $40 million — resulting in 10,777 such homes sitting empty in Hope, Ark., in sinking mud without proper storage. "It was unclear how the decision was made," the Homeland Security audit stated."

Everywhere we look, we find cases of inefficient and downright wasteful practices. FEMA's own rules, for example, ban mobile homes in flood plains, yet the same agency nevertheless ordered the construction of 26 thousand of them for Katrina victims.

It does not matter one whit whether Mayor Ray "Chocolate City" Nagin or Governor Blanco or the enlightened central planners at FEMA were the ones guilty of improper allocation of resources. The truth is that the entire system of government aid continually fails to efficiently provide goods and services. Lacking a market test where gains and losses are used as guides, the government cannot possibly determine either the amount or the quality of goods and services to produce. All that can be done is a botched attempt, something like driving blind and drunk on an icy road at night with a flat tire and very strong winds.

It has been six months since the hurricane. There are folks out there having the time of their lives in posh hotel rooms watching the latest HBO series while FEMA, and ultimately all of us, pays for their fun. Then there are those who still want trailers and those who want trailers off their driveways.

These absurd occurrences are the result of intervention in the market, of socialist "solutions" to government-created problems, and of bureaucratic management. Not subject to the forces of supply and demand, government offers both too much and not enough of things.

For as long as intervention exists, economic chaos will reign supreme. Let the market restore order.

Manuel Lora is a freelance TV producer and multimedia specialist in New Orleans. vanguardist@gmail.com. He loves hanging out in the Mises chatroom. Comment on the blog