GET NEWS AND ARTICLES IN YOUR INBOXPrint
A
A
Home | Mises Library | What Can Mötley Crüe Teach Us About Drug Legalization?

What Can Mötley Crüe Teach Us About Drug Legalization? 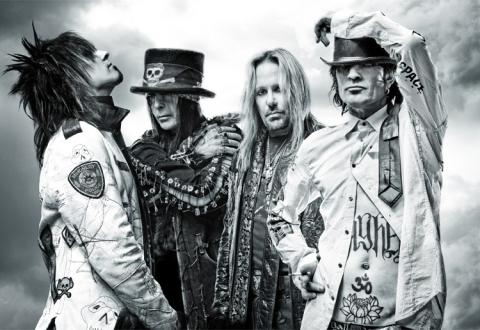 Mötley Crüe rocked the 1980s. They played hard and partied harder. Their lifestyle was a toxic mixture of drugs, alcohol, fast cars, and fast women. Their reputation for drug abuse remains legendary — rivaling Ozzy Osbourne, the Grateful Dead, and even the Rolling Stones.

Anyone supporting drug legalization must reconcile their position with the behavior of these coked-up hallucinating tattooed hooligans on motorcycles. Most citizens fear legalization would lead to the rapid decline of Western Civilization: the youth would jump at drugs; dope would be in every home and every vein; morality would fly out the window, and life as we know it would collapse all around us.

While the history of Mötley Crüe would seem to confirm this fear, a more critical examination reveals otherwise. To be sure, the Crüe's drug rampage led to countless arrests, innumerable divorces, overdoses, brawls, and even deaths. The arrests were for the usual drunken idiocy, public intoxication, fights, and vandalism.

A few members of the band were also involved in more serious incidents:

Lead singer Vince Neil was accused of vehicular manslaughter while driving under the influence of alcohol and an all-night cocaine binge. (Whether the accident was attributable to anything more than the alcohol, however, is dubious.)

Lead guitarist Nikki Sixx actually died from an overdose — only to be revived by an adrenaline shot to the heart. Hours after his revival, Sixx checked himself out of the hospital, hitchhiked home, and shot up with heroin again.

Drummer Tommy Lee had a string of divorces and faced jail time for hitting his wife Pamela Anderson. His out-of-control antics left a trail of minor offenses and petty misdemeanors.

With nearly three decades gone by, 80 million albums sold, and a couple of perfectly good Ferraris crashed, Mötley Crüe is still alive today — sober and rocking. The common wisdom would have had us predict the opposite: in the case of rock stars, budgets enabling gargantuan drug dependencies should lead to bigger problems, not blissful recovery. And yet we can see clearly that this is not the case.

Consider the fact that Mötley Crüe's story is hardly unique. Almost every major rock band notorious for drug addiction eventually cleaned up. The list includes countless names: Led Zeppelin, the Rolling Stones, Bon Jovi, Guns n' Roses, and many more. Rockers who abuse drugs for more than two decades are the exception, not the rule.

The entirety of Mötley Crüe's career, in fact, follows drug-legalization theory quite well. Here we have a set of gentlemen who had no monetary constraints to their drug use. These rockers could afford near-infinite quantities of cocaine, weed, and LSD. The relative monetary cost of drugs was next to nothing for them. And while they also could afford expensive drug-rehabilitation programs at top-of-the-line treatment centers, they had no financial incentive to stay clean when they came out.

The crimes committed by the Crüe fit the theory's expectations perfectly. There was an increase in minor nonviolent misdemeanors, domestic disturbances, bar fights with fellow drunkards, and intoxicated driving. Due to their financial situation, they committed no muggings, break-ins, or gang shootings to enable their habit.

Since these low drug prices would seem to increase addiction, more complex factors must be responsible for their eventual recovery and continuing sobriety. De facto legal immunity was one such critical element. Rock stars can afford legal protection to an extent unavailable to most citizens. They live as if drugs were legal: arrests are an inconvenience, at most.

Vince Neil's lawyers managed to defend him so well that his vehicular manslaughter sentence was 18 days in prison. Tommy Lee served a short sentence for his domestic violence charge, during which he was separated from the rest of the prison population.

While the Crüe's attorneys had the ability to get them off on real crimes and guarantee their protection in drug cases, average drug users are plagued by innumerable drug laws and often end up with the proverbial "rap sheet a mile long." Also, our hellhole prisons turn users into harsher criminals. The psychological effects of imprisonment, prison violence, and prison rape warp the minds of users going through the system. This process transforms bad habits into horrible degradations and permanently ruins lives.

Without the permanent scars of the penal system, rock stars have a full life ahead of them after addiction. A more common felon's life is forever damaged; his job opportunities are halved by his conviction. Drugs seem an understandable way to deal with the desperation and mental anguish from being locked up for years. Time to build human capital and experience has permanently been stolen by the state. And the burden of dealing with drug laws and the financial, emotional, and physical damage they wreak amplifies the difficulty of healing the broken relationships, depression, and family conflicts common to drug addiction.

Many drug-legalization critics claim that usage would skyrocket after legalization. After all, supply and demand suggests that drastically lower prices will lead to a significant number of new users. These critics do not fully appreciate all the costs associated with drugs. Legalization would only remove monetary and legal problems. Every other nonmonetary problem would still exist.

Take a look at Mötley Crüe again. Despite achieving affordability and legal immunity, the band still decided to stop pursuing their drug-ridden lifestyle. Drugs cause an assortment of interpersonal issues from health problems to broken friendships to wrecked families. Even if drugs were free, the personal cost of doing drugs would always be high. Without legal consequences or high prices, drug use of Mötley Crüe's caliber would thus still be a rare case.

An important aspect differentiating rock-star usage and common-consumer usage after legalization would be vocation: A rock star plays a two-hour show every few days, maybe accompanied by a press interview here or there. In between, the bands travel with little responsibility or concern. This breeds an environment prone to drug use. As the old saying goes, "idle hands are the devil's workshop." Even when performing, sobriety is not always a requirement. In fact, the show might be a little better, depending on the level of intoxication.

One might reasonably argue that the same time-dependent considerations apply to all careers. If accountants worked for only two hours every few days at the same pay, one might expect a drastic jump in their drug and alcohol abuse. Most of us have nine-to-five jobs and can't afford to do drugs because of our responsibilities. How many readers have the time to smoke crystal meth this weekend and stay awake for 36 hours? Close to none (except for college students). It is not an accident that college students, with plenty of time on their hands, have a reputation for heavy drinking and drug use. Students don't mysteriously mature from age 22 to 23 and stop drinking. They get jobs, which increase the effect of drugs and alcohol on their productivity and lead to lower usage.

Other groups associated with high rates of drug abuse have a similar profile: lots of time and few responsibilities. The poor, for example, collectively consume large amounts of drugs. Doing drugs didn't necessarily make them poor. The impoverished simply have far lower nonmonetary costs from doing them. What is a welfare recipient's opportunity cost for smoking crystal meth and staying up for 36 hours? Certainly less than that of a Wall Street hedge-fund manager. As Bob Dylan once sang, "When you got nothing, you got nothing to lose."

Low-paying jobs have similar low costs for drug usage, especially in the service industry. If a waiter loses a job, he can grab another in a few days. Resumes are often unnecessary, as are drug tests. Past employers are seldom contacted. If a waiter does drugs on the job, shows up late to work, and starts slacking, another job is waiting just around the corner.

For an accountant, on the other hand, losing a job could result in months of unemployment. There is lower turnover in the industry; resumes will be closely examined; former employers will be contacted. An accountant fired for drug usage would be lucky to ever find a job approaching his former stature. Years of college and experience would burn up in flames. No matter how low drug prices may go, these consequences and economic costs would never disappear.

Admittedly, the use of some drugs, particularly marijuana, might increase significantly. And yet any horrible consequences from that are questionable. Pot is already the most-used illegal drug out there. Smoking weed has the lowest time cost of all the drugs. In fact, the time cost is lower than that of alcohol. A pothead can smoke a joint and be sober in an hour. I've yet to see a drunk who can do the same. Further, you can't binge for days on marijuana as you can with crack cocaine and other substances with low durations. The use of marijuana might even have a positive effect if it supplants the use of alcohol — a substance with many seriously deleterious effects.

There are also significant positive effects to be expected from drug legalization. For example, prices will be so low as to allow beggars to get a cheap fix just as the homeless now do with $6 bottles of vodka. This will discourage impoverished addicts from stealing, robbing, or killing for drugs.

Without the legal system ruining the lives of nonviolent drug users, there will be light at the end of the dark tunnel of drug addiction.

Not all problems will disappear, of course. Drugs will continue to wreck lives, just as alcohol dependency has been doing for centuries. But one day, hopefully, drug addiction will be dealt with by doctors, friends, family, and churches — not prison cages and an aggressive police state. Drug addicts will be allowed to peacefully readjust to society, becoming productive members without the scars of the penal system. They will have a chance to recover and to rock on, just like Mötley Crüe.