GET NEWS AND ARTICLES IN YOUR INBOXPrint
A
A
Home | Mises Library | Was Spock an Austro-libertarian? 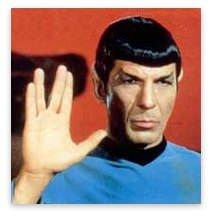 Are the Vulcans, as popularized by Commander Spock of Star Trek fame, really future Austrians in disguise?

Here's the scenario: In about 100 years the last tiny group of fugitive Austrians come up with two brilliant plans. The first is to escape the Earth using gravitic wave engines, and the second is to wear prosthetic wax ears and bad haircuts for the rest of time, to avoid being spotted by the rest of humanity when it eventually catches up with the Austrian Diaspora.

How do I know this scenario to be true? The clues are there. All you have to do is examine Vulcan wisdom, via Spock's own recorded quotations, sent back to us via a cunning time capsule process and inserted into the famous TV series to help us eventually escape the thrall of the state. Let's begin with an overview:

Being a Vulcan means to adopt a philosophy, a way of life which is logical and beneficial. We cannot disregard that philosophy merely for personal gain, no matter how important that gain might be. — Journey to Babel

Or in other words, if you want to understand the social sciences, adopt the praxeological method of a priori logic. You need to have your theory straight before you begin to try to come to some clear understanding of how the world around you works. In the long term some of us may die, but our children will succeed to inherit our decisions, good or bad. So if you want your children and your neighbor's children to prosper, always follow the Austrian method of logic.

Violence in reality is quite different from theory — The Cloud Minders

In other words, a coherent and orderly society cannot be imposed by force but rather results from agreeement and exchange. Force results in consequences different from that anticipated. Also, people get hurt. You'll notice that the warmongers among you never send themselves, or their children, or their friends' children into battle. There is a reason for this. They are stupid but cleverer than they appear. They are perfectly willing to use your children and your wealth to further their own material ends and their own power addiction needs.

Men of peace usually are brave — The Savage Curtain

If you fail to stand up to attack, expect to be attacked. You must defend your property if you are to retain it. You must be brave to defend yourself. But never break the first and only Vulcan commandment: the use of force is justified only in response to force, or a threat of force, directed against one's property rights. This is the way of peace.

Physical reality is consistent with universal laws. Where the laws do not operate, there is no reality. — Spectre of the Gun

Avoid the smoke and mirrors empiricism of the Chicago School, especially Coase.  (The Vulcans seem to have this intense bitterness towards the Chicago school, or the Romulans, as they themselves call them. Romulans, they believe, are almost like Vulcans, leading to a confusion of the two distinct philosophies by outsiders. By the way, the Vulcans have no problems with the Klingons, because at least these armored buffoons can be seen in daylight for what they truly are; straightforward warmongering statists.)

We can never have all the facts, so it is folly to attempt to draw broad conclusions only from what we can observe.

Without followers, evil cannot spread — And The Children Shall Lead

The over mighty state always tries to make the impression that it is invulnerable for all of time; witness the slogans of the Third Reich, the Soviet Union, and the Republican Party, but they always need the support of the people if they are to survive. This is why they constantly bribe their indolent indentured intellectuals to propagandize on their behalf. These intellectuals are the followers. They are the ones who spread the evil. Remove the influence of the followers and the evil will dissipate like mist in the wind.

Ok, it's a lot to read into five words, but I think I've caught the gist of it.

Humans do have an amazing capacity for believing what they choose; and excluding that which is painful — And The Children Shall Lead

Your time preferences are amazingly high. This is the route to decivilization.

Unhappiness is the state which occurs in the human when wants and desires are not fulfilled — I, Mudd

And it is this unhappiness which leads to the drive to Human Action, the basis of all sensible economics. (By the way, I have a digital copy of the scholars edition in my tricorder. Would you like to see it?)

Freedom of association will lead naturally to inequality, and the formation of natural elites. The trick is to prevent one of these families of nobles from usurping all the others with an appeal to the common people to create a monopoly on justice. But if you can manage this trick, you will reach the same state of mutual tolerance as we have reached on Vulcan.

This troubled planet is a place of most violent contrasts; those who receive the rewards are totally separated from those who shoulder the burdens. It is not a wise leadership — The Cloud Minders

To avoid the welfare and warfare state, taxation must be removed or it, and its agents, will eventually destroy you.

Those who hate and fight must stop themselves; otherwise it is not stopped — Day of the Dove

Follow the Jeffersonian path of peace and freedom, of free markets and defensive military isolationism. Just as those who war with market forces produce chaos, one aggressive military intervention will always necessitate another, until eventually you will have troops in ever corner of the world. The hatred this generates will eventually necessitate troops on every street corner of your own land. So if you want peace, stop inflicting peace on other nations, otherwise you will enter a permanent Klingon realm of total war.

Next time you see a politician weeping over the death of one child close to them, wonder if the price they paid for killing millions of children remote from them, which caused this single death, was really worth it.

Follow the Austrian way of peace. Adopt as a way of life social tolerance, laissez faire capitalism, and the avoidance of aggressive war, and you and your descendants will live long and prosper beyond the current possibilities of your wildest dreams.

In all seriousness, many science fiction writers in the 1950s and 1960s were deeply interested in the ideas of freedom and many may have read Ayn Rand's Atlas Shrugged. Perhaps some of those who contributed to Star Trek were fascinated enough by Rand's promotion of Von Mises to investigate his economics in Human Action, which then helped them add a deeper philosophical quality to Commander Spock's logic?  We will never know and I am admittedly leaping in the dark, but some of quotes above ring too close to be coincidental.  For instance, let's take a direct quote from Human Action:

We call contentment or satisfaction that state of a human being which does not and cannot result in any action. Acting man is eager to substitute a more satisfactory state of affairs for a less satisfactory. His mind imagines conditions which suit him better, and his action aims at bringing about this desired state. The incentive that impels a man to act is always some uneasiness. A man perfectly content with the state of his affairs would have no incentive to change things. He would have neither wishes nor desires; he would be perfectly happy. He would not act; he would simply live free from care.

If you had to paraphrase that, would the following quote from I, Mudd be a good summary?

Unhappiness is the state which occurs in the human when wants and desires are not fulfilled.

I think it would.  So let's just take that leap and say there is no doubt. Spock was an Austro-libertarian. We therefore must be the future Vulcans. Does anyone have any wax?