Walmart and the Right to Discriminate 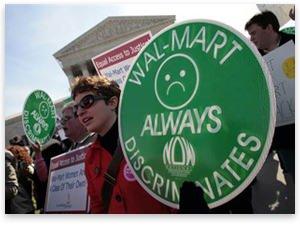 Let us imagine a little experiment. You, dear reader, encounter a Rottweiler, not on a leash but loose. How do you react? Do you take into account Rottweiler folklore? Do you worry that your reaction may hurt the feelings of the Rottweiler? Or would you just discriminate?

If you look at the news this week, you will notice articles about the class-action suit against Walmart. You'll see headlines such as "Walmart Just Beat the Biggest Gender Bias Case in History." They are highly misleading, to say the least.

A class action is a type of lawsuit in which a large group of people collectively bring a claim to court. The group has to have a very uniform claim: the grievances must be almost identical, otherwise the claim cannot be dealt with as just one case, but rather, it has to be split up into individual cases or into smaller groups.

This is what just happened to a group of women suing Walmart for sexual bias in the workplace. The Supreme Court did not rule on the merits of the claims, but it did prevent the women from suing Walmart as one big group. The justices felt that the cases were too different and could not be tried under one umbrella.

Gender bias is a touchy subject, especially because women have been denied their freedoms and have been abused for millennia. Nothing is more important than self-ownership and complete freedom for all. But we need not jump the gun; rather, we should look at things a bit deeper.

First of all, let's be very careful with statistics in general. When they tell you that women earn 75 percent of what men earn in similar positions, or, as in the Walmart case, that "women make up more than 70 percent of Walmart's hourly workforce but … made up less than one-third of its store management," they are not taking into consideration the fact that the careers of women are negatively impacted by marriage and child bearing, whereas it is often the opposite for men.

The fact is that women do not work the same number of hours, they do not work in the same occupations, and they have a tendency not to work continuously during their lives. Women make these choices because they tend to value flexibility. If you look at women who have never been married as a statistical group, all of these differences vanish.

Just to give you an example, young male doctors make considerably more than young female doctors. This is the type of statistic that gets very easily manipulated and publicized. However, if you look deeper, you will see that young male doctors work about 500 hours a year more than their female counterparts. Nine additional hours per week is no small difference!

Except for child bearing, breastfeeding, and the like, household work can be evenly divided between men and women, but in practice this does not happen. The result is that women invest in their husband's careers. Married males, who enjoy the support of their wives, tend to do better in business than unmarried males. Successful, married businessmen could not perform as well as they do without the help of their wives, so the additional income is not a function of discrimination but rather a function of additional productivity made possible by their spouses. This is never taken into account in divorce cases where the common property is split evenly, yet the man gets to keep his career advancement.

Walmart is constantly depicted as the most heartless company in the world. People say that nothing matters to Walmart except profits. The company is accused of not having any loyalty, even to its own country. Now if this company is so ruthless, and they can hire women to do the same work for 75 cents on the dollar, why wouldn't they jump on that golden opportunity?

In answer to that, the claimants say that, even though only profits matter, when it comes to hiring, male managers only want to hire other males. For some reason the company deliberately tosses aside all economic matters and takes a 25 percent loss just so that the guys can be with their buddies.

This claim is — of course — preposterous. If women could be hired to do the same work for 75 cents on the dollar, the business world would not ignore this difference.

Good businesses cannot afford this type of discrimination in the long run, because other businesses that realize the profit potential will thrive and replace those who ignore economic reality. This means that it is highly unlikely that any funny business is taking place at Walmart.

But what if gender discrimination is in fact happening?

Please ask yourself: How many male babysitters have you ever hired? How many females have you hired to do your car repairs or construction work? Would you hire an attractive male to teach your young daughter piano?

If you are a normal person, love your family, and value your property, you will probably give very politically incorrect answers, and it is your right to do so. Ultimately, it is your money, your property, and your loved ones. So, if discrimination can be a matter of self-ownership and property rights for us, it should be no different for Walmart.