GET NEWS AND ARTICLES IN YOUR INBOXPrint
A
A
Home | Mises Library | Walk Away: The Rise and Fall of the Home-Ownership Myth

Walk Away: The Rise and Fall of the Home-Ownership Myth 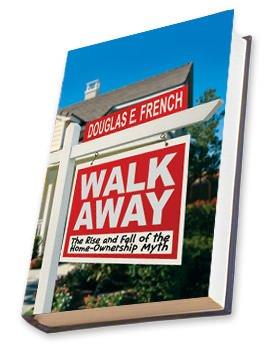 [Introduction to Walk Away: The Rise and Fall of the Home-Ownership Myth]

The idea that "a man's house is his castle" is attributed to American Revolutionary James Otis from 1761, and his idea was that government should never be permitted to breach its walls. It is a good thought, in context, one that sums up a dogged attachment to the right of private property.

In the 20th century, however, government got behind the idea that every citizen should be provided a castle of his or her own. This is the essence of the good life, we were told, the very core of our material aspirations. The home is the most valuable possession we could ever have. It is the best investment, even better than gold. Government would make us all owners, one way or another, even if it meant violating rights to make it happen.

This became an article of faith, a central tenet of the American civic religion, and one that led to additional spin-off doctrines. We should fill our valuable homes with vast amounts of furniture, large pieces especially, things that suggest permanence and roots. If there was any doubt as to where to put our money, an answer was always ready: put it into the mortgage, where it will surely pay the highest return.

The home itself could provide full-time employment for half of the American citizenry, as all women became "homemakers" who devoted themselves to cooking, laundry, and cleaning, while all extra time that the man had was to be devoted to lawn care, household repairs, and landscaping. The home was the very foundation of community, of freedom, of the American dream. It embodied who we are and what we do.

Beginning in 2007 and culminating in 2008, this dream was smashed, as home values all over the country plummeted, wiping out a primary means of savings. Some homes fell by as much as 75–80 percent, instilling shock and awe all across the country. The thing that was never supposed to happen had happened. This meant more than mere asset depreciation. An article of faith had fallen, and there were many spillover effects.

The home was the foundation of our financial strategy, our love of accumulating large things, the core of our strategic outlook for our lives. Once that goes, much more goes besides. The things in the home suddenly become devalued. We look around ourselves in astonishment at how much stuff we have, and we are weighed down by the very prospect of moving. We are longing for a different way, perhaps for the first time in a century.

We are beginning to see the response in the new behavior of some younger people. The New York Times, the Wall Street Journal, and other major media outlets are starting to cover the trend of what we might call the new mobility. Young couples are selling off their possessions: their large furniture, their china and crystal, their enormous bedrooms suites, and even their cars. They are lightening the load, preparing for a life of mobility, even international mobility.

The collapse of the housing market — which has occurred despite every effort by the government to prevent it — coincides with the highest rate of unemployment among young people that we've seen in many generations. Economic opportunity is dwindling, at least in traditional jobs. The advance of digital technology has made it possible to do nontraditional jobs while living anywhere, and perhaps changing one's location every year or two.

Millions have walked away from their mortgages. Those who have swear that they will never again be tricked by the great housing myth that this one asset is guaranteed to go up and up forever. The new source of value is not something attached to the biggest thing we own but rather in the most fundamental unit of all: ourselves, and what we can do. This change represents a dramatic change not just for one generation but for an entire ethos that has defined what it means to be an American for about a century.

To walk away might at first seem like a postmodern activity, one that disconnects us with history and community. We might just as easily see it as a recapturing and redefining of an older tradition that shaped the American ethos from the colonial period through the latter part of the 19th century: the pioneer spirit. Our ancestors moved freely, across great distances, beginning with oceans and then continuing across great masses of land, from New England to the West, all in search of economic opportunity and the fulfillment of a different American dream defined by freedom itself.

This change begins with a single realization: I'm paying more for my house than my house is worth. What, precisely, is the downside of walking away, of going into a "strategic default"? I lose my house. Good. That's better than losing money on my house.

But what are the economic and ethical implications of this? Americans haven't faced this dilemma in at least a century. But now they are, by the millions. They are awakening to the reality that the house is no different from any other physical possession. It has no magical properties and it embodies no high ideals. It is just sticks and bricks.

This book examines the background to the case of strategic default and considers its implications from a variety of different perspectives. The thesis here is that there is nothing ominous or evil about this practice. It is an extension of economic rationality.

But what about the idea that our home is our castle? My thesis is that the essence of freedom is to come to understand that the real castle is to be found within.

This article is the introduction to Walk Away: The Rise and Fall of the Home-Ownership Myth