Wal-Marts of An Earlier Age 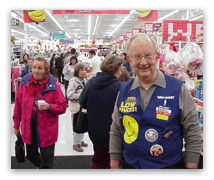 The attack on Wal-Mart essentially comes down to this: opposition to economic progress, defined as greater availability of goods and services people want, at ever lower prices, indicating an ever wiser use of resources in the service of society.

It is hardly the first time such progress inspired opposition.

In 1868, the Pennsylvania Rail Road organized the first shipment of fresh fruits and vegetables to the northeastern cities of the United States during the "winter" (actually, it was during April). A train — whose cars were filled with 1200 barrels of produce — was loaded in Georgia, and sent north.

After months of having only apples and potatoes and jams, which could be stored in root cellars, the people of Philadelphia and New York were delighted to get fresh fruits and vegetables. As you could imagine, the business expanded rapidly. Specially-designed fruit and vegetable cars were ordered, formerly independent rail lines were integrated into inter-regional networks, and, in Georgia, farmers started growing peach trees along the railroad network, so much so that the state became known as the Peach State.

Such is the transformational character of the market process, always bringing lower cost, higher quality and greater variety of products to consumers, and continually replacing the old ways with new ways.

Only today, the leading agent of change in retailing is no longer the Pennsylvania Rail Road, nor is it the Montgomery Wards mail order house, nor is it the Great Atlantic & Pacific supermarket chain; it's Wal-Mart.

And, just as greenhouse farmers were threatened by the Pennsylvania Rail Road, and just as "Ma and Pa" grocery stores were threatened by A&P, so too does the entry of Wal-Mart into a community pose a threat to local businesses even as it presents expanded opportunities to local consumers.

Every school child knows or should know that the "industrial revolution" tremendously lowered the cost of manufacturing by gathering production from homes into factories, organizing laborers into teams of relatively specialized workers, and supplementing labor with capital. We call this breakthrough in production "the assembly line," and, most famously in the case of the Model T Ford, it brought the cost of an ever expanding array of products within the reach of the masses of consumers.

But, few people are even aware that there has been a parallel revolution in retailing and distribution. Advances in communication, transportation and the management of business enterprises have so expanded the marketplace that, today, we speak of the emergence of a "global market."

At every step along the way, local, skilled craftsmen and independent businesses have had to face the challenge of big businesses entering their market. Suddenly, so it seems, local producers lose their competitiveness in those goods and services amenable to mass production. But, at the same time, the fact that we are all achieving higher standards of living means that new opportunities are opening up for those business men and women who can perceive how consumers would like to spend their increased wealth.

Generally, local, skilled craftsmen and independent businesses have been shifting to higher quality products, specialty shops, and personalized services. For those who understand these changes, the fact that the emergence of the global economy is occurring simultaneously with a vibrant and entrepreneurial small business sector is not at all a paradox.

The transformational change brought about by the market process almost necessarily involves stress and disruption. In addition, in the short-run, there can be winners and losers (although, in the long-run, we are all winners). The great Austrian-born economist Joseph Schumpeter described this messiness as "the creative destruction" of the market process.

Even those of us who appreciate the advantages of the market process — including, in addition to a higher standard of living, the joining of all the people of the world into one, global community, and even an increased ability of each person to actualize his or her potential — even we understand that there are some disadvantages. And, whoever becomes associated with being the foremost agent of change in any given period is going to be blamed for the bad side of the creative destruction of the market process. So it is, today, with Wal-Mart.