GET NEWS AND ARTICLES IN YOUR INBOXPrint
A
A
Home | Mises Library | Victims on Trial: The Everyday Business of Courts

Victims on Trial: The Everyday Business of Courts 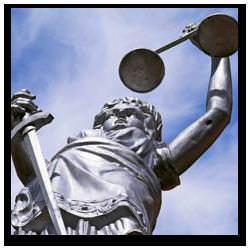 It is inherently implausible, if you think about it, that the state could be an effective administrator of justice, for which there is a supply and demand like any other good. Shortages, inefficiencies, arbitrariness, and high costs will be main features of such a system. And because we are dealing here with the meting out of coercion, we can add the presence of inhumane treatment and outright cruelty.

Even so, nothing had prepared me for what I witnessed in the courtroom the other day. Like a fool, I thought I might be able to beat a traffic ticket I received a block from my home. The policeman says I slowed almost to a stop rather than completely stopping at a three-way stop where there were no cars in any case. So my prize was a ticket.

The officer assures me that I'm not declaring guilt, but I have to sign this form anyway. I can challenge it on my court date. So, again foolishly, I decide not to go the route of everyone else — admit guilt and cough up — but instead to exercise my citizen's right to make a challenge.

I show up at court. Except that on my appointed date, the judge wasn't there. Why? They wouldn't say. Is he sleeping in? No. Taking a family vacation? Outrageous that I should even ask! OK, then, how about I see the substitute judge? There is no such thing. But if I hadn't shown up I would go to jail for "failure to appear." How is it that he can fail to show up and everyone acts like this is normal? The clerk rolled her eyes.

Silly me. This is the state. Different rules apply to it as versus me. So I am given a new court day, 6 weeks later.

I show up again, and tell the clerk that I plan to say that I am not guilty. This moved my papers to the bottom of the stack, which is a very bad omen. I would end up sitting in the court room all morning, listening to some 40 cases of people who are not so foolish as to protest the judgment of the officer of the law.

But then again, it wasn't so bad. I got an education. It turns out that in a courtroom packed with purported criminals, not even one of the people who appeared before the judge was a danger to society. Nearly all were in for victimless crimes. The two who had perpetrated actual crimes — petty theft from Wal-Mart and the local mall — could have easily been dealt with without involving the state. So far as I could tell, the place could have been emptied out completely and our little community would have been no worse off, and massive human suffering could have been avoided.

But that's not the way it works. These people, overwhelmingly black and poor but dressed very nicely in the hope of impressing the master, found themselves entangled in the web and thereby elicited the glare and killer instinct of the spider. How painful it was to watch and not be able to do anything about it.

The first case turned out to be typical. This was a person picked up for "public intoxication," which amounted to overcelebrating following a football victory and daring to walk on the government's sidewalks under the influence of one too many. Arrested, jailed, bailed out. Now was the time to face the judge.

What is your plea? Guilty, your honor.

What do you have to say for yourself? I'm so sorry that I did this and I won't do it again.

The judge then decides to be lenient. He gives the minimum fine plus court costs. I couldn't find any consistency in this pricing scheme, but generally it amounted to between $400 and $1,500. The judge asks the person to pay it now. When he says that he doesn't have the money, the judge considers a payment plan, contingent on the guilty declaring his income to the courtroom; it averages $400 per month.

Oh, and there's one more thing. The criminal's driver's license is suspended for six months. How can he get to work? That's his problem. It is a very special problem since the court has decided to loot the person of a quarter of his income during this very period. How can you keep your job? Hard to say. Life is tough. And that's the price you pay for drinking a few beers and daring to walk on the sidewalk.

So on it went for person after person. Tragedy all around. Pointless suffering. There were other victimless crimes. There were a few people who smoked pot — and one who carried a joint clip or some other drug paraphernalia in his car. There was a person who made a "false report," which seems to be lying to the policeman. He was dragged off to jail on the spot.

Another victimless crime of which these people tended to run afoul: "resisting arrest." I'd never thought about this charge much, since it is a rather stupid thing to be disobedient to the police. Still, we must ask questions. To protect oneself from danger, threat, and capture is the most basic of all human instincts. We resist criminals. We duck when someone tries to hit us. Maybe we fight back if we think we can win. We lock our doors to deter invasion to protect our property and person. The right to resist being captured is the very heart of the idea of security.

Why is it that we are expected to utterly gut our instinct for self protection when the cops, for any reason they happen to manufacture on the spot, say we must? It doesn't matter if we are guilty or innocent, whether the cop is wonderful and wholly corrupt, or whether the crime was tiny or big: we must immediately turn into human rag dolls and obey our masters. And if we do not, and instead we walk away or run, we can be tasered and shot unto death. (The highly disturbing video of the Utah cop tasering the fellow who didn't want to sign a ticket provides fundamental insight here)

Think what it means to criminalize what they call resistence. It means what we believe to be our rights and our freedom are really grants of privilege by the state and they can be instantly revoked on the whim of anyone with a badge. These poor souls in the courtroom were all under the illusion that they were free agents; they therefore ran and resisted when confronted with danger to themselves. Now they are learning otherwise.

But what about the actual crimes in the courtroom that day? A lady had stuffed a package of sliced ham or something into her purse while shopping at Wal-Mart. She was fined $800 and had her license taken away.

What do you have to say for yourself, asked the judge. "I'm very sorry. I need to find other ways to deal with my lack of money," she answered.

Yes, you do, because "we will not tolerate theft in this town," unless, he might have added, it is done by the judge under the cover of the law.

Oh, one more thing. This lady was banned from Wal-Mart for life. Now, this sounds extreme, but it was the only decision taken that day that had the feel of something potentially reasonable. Might Wal-Mart have handed down this penalty itself? Isn't this a good principle, keeping the thieves away from its store? Makes sense, perhaps not for a lifetime but perhaps for a year or two.

But there is one problem. Wal-Mart can't do that. Its shopping space is considered under federal law to be a "public space," even though it is entirely privately owned. You can't decide who you are going to let in or out so long as you charge no membership fee. You have to accept all comers. Only the state can ban people from public property. And so Wal-Mart must use the state's services. It is coerced like everyone else. A compassionate and reasonable private solution is against the law.

But keep in mind that this was a case of theft. The others, they had done no harm to anyone.

The machine continued to operate. The judge hardly looked up, not even to notice how well these nice but exceedingly poor people dressed in an attempt to impress him. They and their lives meant nothing. It was all about keeping the machine working.

Finally 11 AM rolls around. The court had already raised for itself some $20,000, from my calculation. The judge says that there will be a short recess before he hears the not-guilty cases, mine among them. He will then assign public defenders to those whose income is low enough and then schedule jury hearings.

In other words, I would have to wait and then return at some later date. I realized that there was more involved in beating tickets than I knew. I would need to make it my vocation — and perhaps not prevail.

My kids, who came with me, persuaded me that this was hopeless and ridiculous and very costly. I should declare my guilt and pay the $200 and be free. They didn't want their dad entangled anymore in this system. This is what I did, and I was free to go and join the multitudes who put up with this system of blackmail and money extraction every hour and know better than to attempt to use the system to challenge it.

Most people in my position would have never gone to court, and they will never seen just how cruel this system is for the poor, for minorities, and for everyone who gets tangled up in this web of coercion and legalized plunder.

But now I understand something more fully that I once only understood abstractly. I see how utterly ridiculous it is to think that the state can be the right means to help those who are poor or living at the margins of society. The state is their enemy, as it is for everyone else.