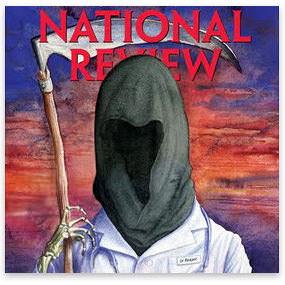 01/07/2011Llewellyn H. Rockwell Jr.
With each published interview, Ron Paul only seems to become more articulate, more persuasive and compelling, more to the pedagogical point in explaining the meaning and priority of liberty as the central political principle. Those of us who understand can only cheer. Those who hold contradictory opinions — favoring liberty in some areas and government expansion in others — find his views, in the words of National Review, "quixotic — unquestionably a little weird."

Let's talk about weird. What's weird is the world of National Review, where it troubles no one to call for huge spending cuts and slashing government at the domestic level while defending the worst form of global imperialism abroad, complete with reflexive defenses of every violation of human rights and liberty.

In what sense can these people claim to favor freedom? Julian Assange released a bunch of boring emails between government bureaucrats and National Review wants him prosecuted under the Espionage Act, passed by Woodrow Wilson in 1917 to persecute his political opponents in America. Editor Rich Lowry writes the following paragraph and fully expects his readers to pick up rocks to stone Assange:

He wants to expose to retribution those who cooperate with us on the ground in war zones. He wants to undercut domestic support for our wars. He wants to embarrass our foreign allies and exact a price for their trust in us. He wants to complicate sensitive operations like securing nuclear material in Pakistan and attacking terrorists with missiles in Yemen. … Confronting a dangerous world is difficult enough without the brazen exposure of the nation's secrets. … Surely, the same Justice Department that sued Arizona for daring to enforce the nation's immigration laws can find a creative way to harry and shut down Assange.

So much for opposing big government. This paragraph reveals that Lowry believes in an identity between the citizens and the imperial national-state ("us," to his mind, means you, me, and the Pentagon). These people seem to think that anyone who releases what the government calls a state secret — no matter how boring and irrelevant it is — should be subjected to the "severest possible punishment," which would presumably include the torture that is also consistently defended on their pages.

What a distance these people have traveled from their ideological ancestors. After World War II, it took about ten years before the American Right could be cajoled into embracing militarism as an essential plank in their platform. In doing so, they gave up their traditional love of noninterventionism as an essential aspect of liberty. And what made them give it up? In a word, it was communism.

The rap from the late 1950s through the late 1980s was that there was a global struggle that was the essential challenge of the time. It was a struggle between individualism and collectivism. The struggle took place on the domestic level between those who favored capitalism and those who wanted a highly regulated, Keynesianized, socialized economy. This struggle was mirrored on an international level because there were these communists running around trying to impose their godless collectivism on all kinds of innocent people around the world, and they had to be stopped. Therefore a consistent individualist could and would oppose big government at home and embrace the use of American military might to roll back communism abroad.

That was the ideological tableau that was painted by the likes of William F. Buckley and Whittaker Chambers, and many good people were drawn to it — even sincere libertarians like Frank Mayer went along with it. On the surface it seemed to make some sense. You had to have a pretty keen eye to figure out that it was all a pack of lies, that this was an old-fashioned, illiberal imperialism sneaking in under a different guise.

So far as I know, there were only a handful of people on the Right who saw the Cold War as the statist racket that it was. They were led by Murray Rothbard, who documented the whole business in his essential book The Betrayal of the American Right, and included people like Leonard Read, who was for peace in private but pretty much decided not to talk about it for the duration.

In any case, it took something like the great global menace of Soviet communism to persuade the advocates of limited government to go along with cheering on big-government imperialism in the tradition of FDR, Truman, and Wilson. It went against their instincts, which rightly saw military expansionism and war as particular kinds of socialistic policy.

But let bygones be bygones at this point. In 1989, something very striking happened. The Soviet Union imploded, as did its satellite states. The enemy vanished from the planet. One might have supposed that at this point, conservatives would have reverted to their pre–Cold War posture of favoring peace and being suspicious of the state. For a bit, during the Clinton years, this started to happen.

However, it didn't last long. Once a Republican took control of the White House, the conservatives were at it again, whooping it up for war, calling the advocates of peace traitors, arguing for the worst possible Machiavellian policies of lies and the rack for the opponents of the great god nation-state.

Today it is hard to make sense of why people on the Right are so solidly proimperialist. I offer two possible explanations.

The first is rooted in an ancient nationalist/Manichean instinct variously alive from the Roman Empire in the ancient world through the 19th-century British experience. The idea here posits that one's own state is the light, and the rest of the world is the dark. We must constantly be on the march to light the darkness through military might in order to assure the progress of humanity. This explanation posits a core chauvinism that has taken hold of this sector of American opinion, and it is hardly surprising. It's a very low intellectual orientation, however, as unthinking as it is unseemly. It also stands in direct contradiction to all the talk about the desire to limit the state.

Another explanation is that it is a purely oppositional stance. The American Right is against the Left. The Left tends toward peacenikism. Therefore the Right must oppose peace. This is a view held by people who lack the courage to think independently, people who buy their political ideology prepackaged right out of the vending machine. It is a tendency of people who join the College Republicans, but it is beneath any serious adult.

Regardless, it is a sad and pathetic thing that people at National Review would look at a consistent proponent of liberty like Ron Paul and find his views completely quixotic, bizarre, unpredictable, and incoherent, whereas every single one of the monikers applies in spades to a crowd that imagines itself opposing government while lustily calling for the death of anyone who would dare reveal to the public the inner workings of that government.