GET NEWS AND ARTICLES IN YOUR INBOXPrint
A
A
Home | Mises Library | Two-Cent Pennies: a Window on Inflation

Two-Cent Pennies: a Window on Inflation 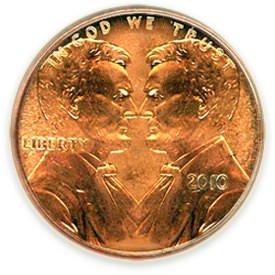 Johnny Carson might have quipped about the economy, "Inflation is so bad these days… that pennies are now selling on the street for two cents."

This joke may not be all that funny, even with the great Carnac delivering it, but it does have the underpinnings of good comedy: an absurd story based on a kernel of truth.

Old pennies are routinely traded at premium prices, sometimes twice or more their face value. This is not because they are rare or precious — they were minted by the tens of billions — but simply because they are worth more as metal than as money.

Because of this "bullion premium" on the older pennies, a small cadre of penny hoarders is actively searching through America's stock of pennies to pick out these undervalued coins.

Casual observers are not struck with a deep sense of economic import when they learn about penny hoarding. Neither are most economists. The government dealt with the problem by simply making the coin out of a much cheaper metal: zinc. So what's the big deal?

Well, it turns out that the cheaper metal didn't stay cheap forever, and again it costs the US mint more than a cent to make a penny (and, incidentally, more than 5 cents to make a nickel).

By one estimate, the mint lost over $100 million making pennies in 2007, with costs ranging from 1.2 to 1.7 cents for each penny made. So the government is likely to change these coins to an even cheaper metal, this time steel, which is as cheap as it gets. The next step would be to abandon the coin altogether (as many countries have done with their smallest denominations) and have people round prices off to the nearest nickel or dime. At that point, governments should have the "coinflation" problem pretty much taken care of.

But debasing coins usually fails in the long run, as the metal value of small coins tends to rise above face value. It has happened several times in American history, with various coins during the colonial era, the thick copper-nickel pennies during the Civil War, and with silver dimes, quarters, and half dollars during the mid-1960s. The connecting link in all these stories turns out to be paper-money inflation. Paper money is inherently inflationary, and, over the long term, tends to drive up the prices of commodities to the point at which certain coins become undervalued relative to paper currency. These coins are hoarded out of circulation, then traded for their metal value rather than their face value. That this is happening again with the penny should cause us to stop and take notice of a deep-seated, and potentially troublesome, economic phenomenon at work.

It turns out that the penny is an economic bellwether — an indicator of the long-term course of the US dollar and of the soundness of US monetary policy. The penny does have a story to tell. Like a canary in the coal mine of America's monetary system, the penny can warn of lurking inflationary troubles. The lowly penny indeed has economic relevance far beyond its size and value.

From 1864 until 1982, US pennies were made of copper.[1] Rising copper prices through the 1970s made it cost the US mint more than a penny to make a penny, and so a cheaper substitute metal was sought. Late in 1982, the mint began making pennies out of zinc — with a thin copper veneer to make them outwardly identical to previous issues.

Something else happened in 1982. Under Chairman Paul Volcker, the Federal Reserve engaged in a tight-money policy that finally brought the raging inflation of the 1970s down to earth. Prices of copper and most other commodities actually declined over the next several years. Some economists now refer to the period from then until now as the "great moderation," a time of low inflation, low unemployment, and steady economic growth. The monetary moderation has been so successful that most economists these days do not list inflation among the big problems facing the US economy.

Despite this moderation, inflation never really went away. Inflation is the monetary policy of the United States, and has been, with minor interruptions, since the advent of central banking almost a hundred years ago. This is no secret; according to the government's own inflation calculator, it takes $21.57 in current dollars to purchase what one dollar would have bought in 1913.[2] The low and stable, "creeping" inflation of the past 25 years has perhaps been acceptable, especially when compared to the "galloping" inflation of the 1970s and early '80s. Businessmen and consumers are able to cope with the moderate inflation, and economic performance seems to be pretty good. But neither of these considerations changes the fact that, in less than 100 years of inflationary monetary policies, the dollar has depreciated more than 21-fold.

To see how the penny neatly tracks this long-run inflation, we need to look at its "melt value" — the market price of its metal content — and how it has changed through history. In 1864, the first year of the small copper cent, melt value per penny stood at 0.3 cents, less than one-third of face value. This low melt value makes sense, given that the small copper cent was born amidst a tremendous episode of unbacked paper-money issuance — the Civil War–era "greenbacks."

The printing of greenbacks naturally drove prices up, and led to hoarding of small coins, which quickly rose to a premium in terms of the new paper money. The small copper cent was issued as a debasement of the heavier, more valuable copper-nickel cent. By 1879, the greenback currency had been (remarkably) completely redeemed in gold, and America was back to a sound, gold-backed money. This return to gold completely wiped out the inflation of the 1860s. The penny's melt value fell, as did the general price level. Four decades of the classical gold standard saw remarkably stable — at times gently falling — prices. By 1913, the copper penny's melt value had fallen to one-tenth of a cent, about as far from a bullion premium as it could get, thus precluding the possibility of hoarding.

Nineteen-thirteen was a turning point, marking the advent of the Federal Reserve Bank, and the rebirth of inflationary currency not backed by precious metals. If the launch of the Federal Reserve didn't open the door to massive inflation, it at least left it unlocked. From 1913, the price level began to rise gradually — and the penny's melt value along with it. Yet melt value didn't come close to face value until the roaring inflation of the 1970s.

Not coincidentally, 1971 marked the final death knell of the gold standard: after a long series of dollar/gold debasements, President Nixon finally closed the "gold window," removing the last vestige of gold backing from the dollar. With this impediment removed, inflation took off, taking the penny's melt value with it. The rising copper value of pennies forced the mint to seek alternative metals. After experiments with aluminum and copper-plated steel, mint authorities finally settled on copper-plated zinc in 1982, which, coincidentally, just happened to be the beginning of the great moderation.

The great moderation stinted inflation, and actually made the penny debasement seem superfluous for a while. Copper prices actually went down in the mid 1980s, but never back to pre-1971 levels. Volcker and the Fed had sent the inflationary dragon running for cover; copper pennies remained in circulation. They did not slay the beast, though, and the price level continued its steady ascent. Inflation finally caught up to the copper penny, with melt value braking through the 1-cent barrier in 2005. When this "melt-parity" barrier was breached, it happened with gusto: copper prices soared in 2005–2006, pulling the copper cent's melt value as high as 2.6 cents in April of 2008.

As the chart below shows, the penny's melt value roughly follows the overall price level as measured by the Consumer Price Index. Despite fairly wide variations in melt value through the '70s, '80s, and '90s, its overall trend is upward, as if the price level is tugging at the melt value. The bullion premium on copper cents is mostly a product of inflation.

The close relationship between official inflation rates and the bullion value of pennies makes it clear that inflation killed the copper penny. And now, because inflation hasn't really abated during the last 25 years, inflation is also killing the zinc penny.

Inflation imposes many costs on an economy. One of these costs is exposed by the phenomenon of 2-cent pennies: inflation eventually drives the prices of monetary metals above the face value of particular coins. When inflation becomes entrenched in a nation's monetary policy, it leads almost inevitably to coin debasement and hoarding.

Copper-penny hoarding and zinc-penny debasement may or may not mean the "great moderation" is officially over, but they surely are signs that it won't last forever. The debasement of the penny from copper to zinc, and the coming debasement from zinc to steel are clear indicators that US monetary policy makers have cast their lot with inflation.

Wise citizens would do well to stay tuned to the penny and observe what it reveals about monetary policy and the future of the dollar.