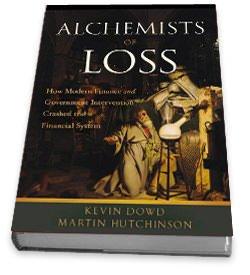 Worrying that their friends on Wall Street are liable to blow themselves up any day with complex financial products and strategies, Congress has passed and Obama has signed 2,300-plus pages of financial reform that provides "an architecture reflective of the 21st century in which we live, but also one that would rebuild that trust and confidence," claims Senator Christopher Dodd who was the lead sausage grinder on the senate version of the bill.

Ostensibly, the purpose of this bill isn't to make Wall Street bigger and to consolidate the banking industry; it's to "protect consumers and lay the foundation for a stronger and safer financial system, one that is innovative, creative, competitive, and far less prone to panic and collapse," President Obama said after Dodd had gathered enough signatures.

Well right, in a perfect world where you wanted to inspire innovation, creativity, competitiveness, and have a financial system that's panic free, you'd immediately start with 2,300 pages of gobbledygook that has been crafted on the fly by Washington lawyers and staffers while great financial minds like Dodd, Barney Frank, Nancy Pelosi, and Harry Reid calmly think through the details and repercussions.

Of course the constant carping has been that there just hasn't been enough regulation: that crazy laissez-faire Bush administration dismantled all the financial regulation don't you know. The real fact is, even the average Podunk bank operating as a holding company not only has a state regulator, but the Federal Reserve, the FDIC, or the OTS, or the OCC regulating them. Not to mention all the business licensing and whatnot that's required on the local level.

regulators in 20 different states being responsible for the primary regulation and supervision of AIG's U.S. insurance subsidiaries. Despite AIG's foreign insurance activities being regulated by more than 130 foreign governments, and despite AIG's holding company being subject to supervision by the Office of Thrift Supervision (OTS), no one was adequately aware of what was really going on at AIG.

There's been plenty of government regulating, and as regulations grow, the incidences of financial booms and panics grow in step, as Kevin Dowd and Martin Hutchinson chronicle in their wonderful new book Alchemists of Loss: How Modern Finance and Government Intervention Crashed the Financial System. Looking back at financial crises, the authors note "the impacts of rampant speculation, government involvement or poor government responses, misguided monetary polices, ill-designed regulation and misunderstood new financial technology, as well as the oft-repeated failure on the part of policy makers and legislators to draw the appropriate lessons from painful experiences" have been constant themes.

Dowd and Hutchinson put the latest crisis in the context of history. They point out that government intervention and misguided regulations were culprits in all financial meltdowns. Austrians may have a few bones to pick with the authors on a couple minor points, but all in all, the strength of the book is its free-market view of the current crisis that shines a bright light on the rampant belief in dubious notions like Modern Financial Theory that include the efficient-market hypothesis and Modigliani-Miller theorem.

Combine loose money with flawed financial theories and the creation of byzantine financial products, and ultimately modern financial alchemy "has a distinctly statist and paternalist tone, and one which, taken to its logical conclusion, implies the establishment of nothing less than a world government with the power to redistribute most of our income at will," explain the authors.

The end of the partnership era on Wall Street, which allowed management and ownership to separate and shed personal liability, has lead to excess risk-taking. Of course, Washington's new financial regulation does nothing about this. Michael Douglas's Wall Street character Gordon Gecko famously made the point that Teldar Paper management themselves owned but a tiny fraction of company stock and weren't acting in its best interest but were earning big salaries for merely sending memos back and forth to each other.

Managers who are not owners, Dowd and Hutchinson point out, are most interested in earning higher salaries for themselves at the expense of the long-term success of the company. So managements are as short-term oriented as Wall Street and Washington are. Managements reduce dividends, engage in creative accounting, trade equity for debt, and reduce research and development costs all to juice up short-term operating profits and their bonuses, while denigrating their company's long-term financial health.

The authors rightly take issue with corporate-finance textbooks that claim that stock options align the interests of managers and shareholders, noting that "stock options often magnify the incentives of executives to take risks that boost short-term earnings at the expense of long-term corporate health."

Finance was once just a small portion of the US economy, but by 2007 it had mushroomed into being over a quarter of the S&P 500, after being only 5 percent of the index back in 1980 — and this doesn't count the financial affiliates of companies like GE. As the authors point out, finance is the largest sector of the US economy, so college graduates believe the road to riches lies with pushing paper, creating complex financial securities, and jockeying risk-management models.

"Finance was once just a small portion of the US economy, but by 2007 it had mushroomed into being over a quarter of the S&P 500, after being only 5 percent of the index back in 1980."

Financial leverage has been heightened at all levels, blessed by the likes of Modigliani and Miller whose theorem implies leverage is irrelevant. With all institutions adopting the same risk management strategies, along with borrowing their way to gargantuan size and the major banks all being interconnected, the potential for panics is heightened and panicked governments believe no one can be allowed to fail.

Modern Financial Theory says you can diversify your way to safety because all information is known, so no one can out perform the market by picking individual investments. This meant that new financial products needed to be created to be part of the diversified portfolio basket. As the quants took over, short-term paper that masqueraded as long-term in the form of auction-rate bonds was created along with Collateralized Debt Obligations (CDOs), CDO squareds, and exotic derivatives based on these products like Credit Default Swaps (CDS).

These products served to grow Wall Street exponentially. All stocks in the S&P in 1957 had a market value of $220 billion. By the end of 2008, that index had a value of $9 trillion, according to the authors, but the real action was in derivatives, which totaled $518 trillion that year, "or about ten times the Gross Global Product."

With government cheerleading for homeownership, Wall Street got in the game with "rating agency mathematicians ... 'proving' that default rates would be low," no matter the poor quality underwriting, done not by Jimmy Stewart à la It's a Wonderful Life, but by an aggressive mortgage salesman on commission. CDS owners jumped on this opportunity to profit by the new financial nonsense and the CDS market grew to $62 trillion at its peak, while the entire market for home mortgages was only $12 trillion. Sold as an insurance to hedge against credit risk, the CDS market morphed into speculation.

Dowd and Hutchinson write that it is government meddling that creates the environment for financial crisis. Deposit insurance and other consumer protection schemes like Securities and Exchange Commission regulation make the average Joe and Jane believe that the government will make them whole no matter what happens. The authors also believe the destigmatization of bankruptcy has caused Americans to overborrow, lowering savings rates along with ethical standards.

Booms and busts, crises and crashes will continue ad infinitum, and the authors believe eventually this will lead to declines in the real economy as well as the financial-services sector. As Austrian theory dictates, malinvestments must be liquidated in the bust, and that includes financial-sector jobs, leaving New York with ghost buildings in the financial district and empty luxury condo towers. For the city of London, Hutchinson and Dowd see the future as being even worse.

Mr. Dowd has written plenty about free banking, and he'd like to fix all of this not with 2,300 pages of additional regulation, but "with a commodity standard, free banking (no central bank) and financial laissez-faire, restrictions on the use of the 'limited liability' corporate form, and the most limited government." The authors seek a "new Age of Economic Reason," abandoning "the philosopher's stone of universal government meddling sought by that sublime Paracelsus of economic alchemy — John Maynard Keynes."

Unfortunately, the Keynesians in the Obama White House likely aren't asking for Messrs. Dowd and Hutchinson's phone numbers: their program is to stimulate, regulate, and keep the zero rate.

Never mind that this hasn't worked any other time and won't this time either.