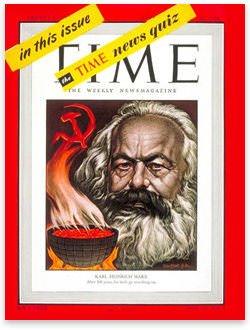 Anyone who is still wondering why the so-called "mainstream media" was so hostile toward Congressman Ron Paul's campaign for the Republican presidential nomination will find an answer in the June 2 issue of Time magazine. Congressman Paul is a deeply educated student of economics, among other things, and an unabashed advocate of economic freedom and limited constitutional government; Time magazine is staffed by socialist ideologues who display little or no evidence of ever having studied economics at all.

The second paragraph of "How the Next President Should Fix the U.S. Economy," by one Justin Fox, explains the real problem as Time sees it: Americans enjoy too much economic freedom. The natural solution, therefore, is to strip them of their freedom with higher taxes, more regulations, and greater regimentation of their lives. The cause of all of today's economic problems, says Time, is of course Ronald Reagan, who supposedly cut taxes, went about "slashing regulation," and preached "the gospel that individual Americans were better suited to make economic decisions than bureaucrats in Washington were." Where on earth did Americans ever get such a crazy idea?

But there is hope, says Time. "There are signs that … America's 25-year love affair with tax cuts and deregulation" is ending. One reason for this is that the federal budget is "way out of balance." According to Time, the fact that the Bush administration has been even more spendthrift (on domestic spending as well as military) than the notorious Johnson administration, and has accumulated huge budget deficits, is evidence that Americans have too much freedom and too much money in their pockets. They need to be taxed more severely in the name of budgetary "balance." Not one word is devoted to the idea of cutting spending of any kind by a single dollar, let alone abolishing entire government bureaucracies altogether.

Then there are "soaring energy prices," caused by increased worldwide energy demand coupled with sluggish supply growth that has been blocked by environmental regulation. This would include the regulations that prohibit oil exploration in 85–90 percent of the outer-continental shelf off the Atlantic and Pacific coasts, as well as in most of Alaska. Even though regulation has caused this problem, the "solution," according to Time, is more regulation of the energy industry.

A third reason for "hope" that Americans will give up their economic freedom is the housing crisis, which again was caused primarily by the Fed-generated boom-and-bust cycle, with a little help from the government's thirty-year policy of forcing banks to make bad loans to uncreditworthy borrowers under the Community Reinvestment Act. Time wants to blame it all on the free market, however, and makes no mention at all of the role of monetary policy in generating the housing-market crisis.

Health-care costs began spiraling out of control as soon as government became involved in the post–World War II era, especially with the advent of Medicare and Medicaid. Health care and health insurance are arguably the most heavily regulated industries in America; decades of cost-increasing regulations have been the main cause of the "health care crisis" that the socialist ideologues at Time are so worried about. Government control of health-care markets is the problem; therefore, the obvious "solution" is even more government control of health-care markets, says Time.

Time's Justin Fox presents a tired, old, laundry list of failed socialistic interventions. These include protectionism; more income "redistribution" (a.k.a., legal theft) via the tax system, i.e., "heavy taxes on the rich"; more pork-barrel "infrastructure" spending — and higher taxes to pay for it; an additional round of tax increases "to close the budget gap" (which of course tax increases never do); yet another round of tax increases on oil, gas, and natural gas to "steer" consumers away from these items; more tax increases still in the form of elimination of the mortgage-interest deduction, which "costs the government about $80 billion a year"; and, of course, socialized medicine, the tax increases for which would entirely swamp all of the previously mentioned tax increases. (Time promises to explain how to "make universal health care work" in a separate article. I can't wait.)

What Time's "fix" involves is essentially the Sweden-ization of America, where the average working family would be handing over 65–70 percent of its earnings to government bureaucrats, with regulation-induced price increases eating up perhaps another ten percentage points. This all needs to be done at the very beginning of the next administration, moreover, for "putting off change won't be an option much longer." It is a perfect recipe for impoverishing America.