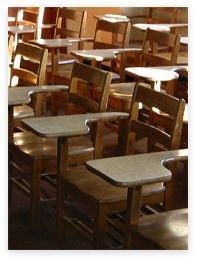 "But when are you going to get to the economics?"

It was the end of my first day volunteering to teach "basic economics" to a group of fifth graders. The teacher looked bemused as she asked the question.

"That's what I'm doing," I whispered a little curtly in reply.

Realizing her offense, she quickly explained her meaning: "You know, with all the graphs and big words and stuff."

I realized this teacher was under the common misperception (perpetuated by most economics professors) that economics is about math, models, and strange lands where a complete lack of real competition is called "perfect competition" and it is possible to visualize (and measure) human happiness using "utility curves."

But I had no intention of subjecting these students to economics of this sort. My goal was far more ambitious. I wanted to show them that economics stems from ordinary human behavior in the real world we face every day. So here is what we did.

My approach was painfully modest. I simply introduced the students to one economic concept per week.

The first week's "word for the day" was trade.

To illustrate trade, I gave each student a very small, inexpensive gift I had purchased at a Dollar General nearby. I distributed the gifts randomly, then told the students they could trade their gifts (if they wanted to) with their immediate neighbors. Some did. Then I opened the class up to unrestricted trade and said they could trade with anyone in the whole classroom. Many more now traded. When they were finished I asked how many of them had traded because they believed by trading they would be better off. All said they had.

Once they settled down again, we talked about the concept of trade in general. I was impressed with how well they already understood this concept; they seemed to clearly understand that exchange involves giving up something you value less for something you value more and finding someone else with opposite valuations. For good measure, I ended the day by snatching away the gifts of two students and forcing a trade where none had been performed. One student was happy with the exchange, the other unhappy. This allowed us to discuss the idea of a "fair" trade — which I defined as a trade where both parties voluntarily take part. Again, I was impressed with how easily they seemed to grasp this idea as I replaced the items I had snatched away for my "forced" trade.[1]

The second week our economic concept was money — something all of the students had a keen awareness — if only a shadowy understanding — of. To illustrate the nature of money I wrote a short play and gave the students different roles. (There was no shortage of volunteers.)

The play was the story, familiar to students of Austrian School economics, of a long-ago egg farmer who had plenty of eggs but desired shoes. Unfortunately, the shoemaker in his town did not like eggs, but often wanted wheat. Fortunately, there was a wheat farmer nearby who wanted eggs and was willing to exchange wheat for eggs, which he did. This gave the egg farmer a supply of wheat that he did not wish to consume but rather to employ as a "medium of exchange" to allow him to obtain shoes. In other words, he used wheat as a form of money.

Of course the play was embellished with some (attempted) humor and silly characters, but the story was basically quite simple and the students seemed to understand its meaning well.

That was as far as we got, but by the end of the hour, I was at least satisfied that my students had a basic understanding of the nature and origin of "money" — something I was fairly certain none of them had heard before nor perhaps would hear again.[2]

On the third week of my class the economic concept of the day was savings. In this day's activity we divided the class into two "villages" — one made up of people who "live for the day" (believing with Keynes that, in the long run, we're all dead) and the other village made up of savers. Every day the kids in both villages went fishing with their bare hands and caught two fish each. In the first village each person would eat both fish at a big party and feast. In the second village, each student just ate one fish and put the second in a small pond located in their village. Soon an intelligent villager came up with the idea for a net to help catch fish. The trouble was the net would take a lot of time and effort to make. Since several days were required, only the kids in the savers' village had the resources available to abandon daily fishing to devote time to making a net. Once they had a net, fewer "savers" were required to catch fish, freeing up other villagers to make bows and arrows, huts, and so on. The "quality of life" in the savers' village seemed to take off geometrically while life in the other village remained the same.

Interestingly, while at first many students had said they would prefer living in the "party" village, by the end of the class, most said they would prefer living in the savers village. We ended the class period talking about the role of savings in allowing people to do things aimed at improving their lives: pursuits that also require time, such as attending school or changing jobs.

During the fourth week's class the word for the day was competition and we played a game I call the "gas station game." Several students play the role of commuters and, at first, one student plays the role of a filling station owner. In the first round of the game, the commuters travel from one side of the classroom to the other, but they require gasoline to make the full trip. I allow the gas station owner to buy a supply of gasoline and then sell it at whatever price he wishes. The commuters are free to car pool if they want, but must otherwise purchase some gasoline. During round one, the station owner sold her gasoline for $2 per gallon, giving her a healthy profit of $1 per gallon sold. In round two, I allowed a volunteer from the class to open a second gas station and charge whatever price he wanted. This was repeated a third time until three competing stations were jockeying for the commuters' dollars and gasoline was selling for an average of $1 per gallon (one student was selling at a loss). When the game was over we talked about what happened to the price of gasoline when competition occurred and even discussed how things would have been different if the "rules of the game" had prevented new competitors from coming along.

At our final meeting, we talked a little about career choices. I had the kids take a career-interest test and then discuss jobs they might want to some day have. We then changed gears completely and discussed the economic concept of price.

To illustrate "prices" we held an auction. Again I brought small gifts to the class and gave the kids pretend money (in exchange for points they earned from the previous weeks' activities). Some kids had a lot of money; others had less. Still, each item was auctioned off to the highest bidder. Items that had several bidders sold for higher prices than items with few bidders — establishing a role for "demand," and when only one or two units of a particularly appealing item, such as chewing gum, remained, its price had a tendency to sky-rocket, showing that the physical quantity of a good matters in light of the human demand imposed on that quantity.

Demand for a labor service — acting on the available supply of people who can perform that service — will set the "wage" for that service. Thus supply and demand, we found, could explain both the price of goods and the price of the human factors supplying those goods.

My goal with these fifth graders was not just to introduce them to the basics of economic science, but to inoculate them against future attempts to teach them bad economics. By showing them that trade, money, savings, competition, and prices all have distinctly human origins and purposes, I hoped to help them make better sense out of the "economics" they will some day be exposed to.

Indeed, the concepts we discussed can easily be shown to relate quite directly to other economic concepts; for instance, trade is related to opportunity cost as well as profit and loss; money facilitates trade as well as economic calculation, savings is tied to investment, capital, and production, while competition and prices are related to demand, supply, and relative scarcity.

The constant animating force behind all human action, and the creativity it unleashes, cannot be captured in predictive models or in mathematical formulas. It is precisely this fact that precludes employing the methods of the natural sciences to solve problems of human action.[3]

The fifth-grade teacher may have struggled with this understanding of economic science, but fortunately, her students had no trouble with it.

[1] According to some economists, we could have determined the appropriateness of this "trade" by subtracting the unhappy student's loss of utility from the happy student's increase in utility. If we reached a positive number, the forced trade should have been allowed to stand.

[2] Mainstream economics treats money as a "store of value" and a thing whose quantity can be manipulated by monetary authorities in order to maintain "appropriate" interest rates, full employment, consumer confidence, etc.