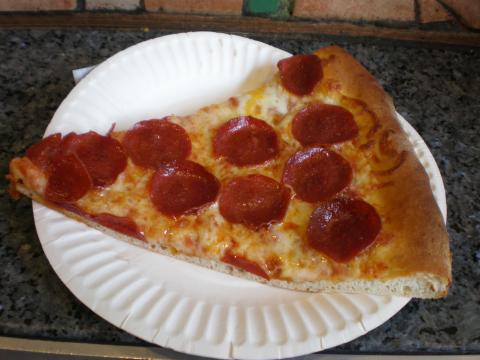 It ain't over on April 15! If you stop, for example, for a $10 pizza on Thursday night to celebrate being done with the IRS for another year, the taxman will be right there to grab a slice or two. On top of paying the sales tax, you'll also be picking up a major chunk of what the government charges the pizza shop owner for local property taxes, unemployment insurance taxes, federal payroll taxes, federal and state and local income taxes, and worker's compensation taxes. Altogether, according to a study by the Americans for Tax Reform, that comes to $3.80 on a $10 pizza for the omnipresent taxman.

If you pick up a Bud six-pack to go with the pizza, there's another 43 cents of each beer dollar that goes straight to the taxman for excise taxes, income taxes, property taxes, etc. For something stronger, say Jack Daniels, the taxman's share is $7.20, on average, out of every $10. Go lighter and just drink a Pepsi and it's 35 percent of what you pay that goes for taxes at all levels. Add some Marlboros and it's 75 percent of the retail price that's funneled directly into the state's coffers. Get home and hit the light switch and another $26 out of every $100 on the electric bill goes for government rather than electricity.

If you're flying the next day, the taxman is up early and waiting at the airport, pocketing $40 on every $100 airline ticket. And he's there in the hotel lobby when you land, snatching $43 on every $100 of the hotel bill. Go out to dinner and it's another $28 of every $100 of the tab that ends up with the government rather than with the restaurant, the farmers, truckers and everyone else who worked together to produce the meal.

At each and every stop, in items large and small, the greedy hand of government has its sticky fingers in every pocket. With bread, a recent study by Price Waterhouse shows that 30 different taxes imposed on the production and sale of a loaf of bread account for 27 percent of the average retail price. Buy some new tires and it's $36 on every $100 that goes to the taxman. On the price of a new car, an Americans for Tax Reform study shows that total taxes reach 45 percent of the showroom sticker price. Add some gas and 54 percent of what you pay for a fill-up goes for 43 different federal, state and local taxes rather than to the oil producer and retailer.

At the start of this nation's unique experiment with individual sovereignty and limited government, "Taxation without representation is tyranny" was the watchword of the American Revolution. For our Founding Fathers, a level of taxation of only a few cents on a dollar, siphoned off to a faraway and arrogant bureaucracy, was enough to ignite a revolution, enough to grab the trusty musket off the wall. Today, in contrast, if we dare to startle the more panicky among us by buying a good rabbit gun, the government's there at the cash register to check our papers and seize $46 on every $100.

All of this, of course, this immense pile of hidden taxation, is stacked on top of our local property taxes and our local, state and federal income taxes. The way out? Not so easy: act up and phone an IRS bureaucrat in D.C. about out-of-control government and the taxman grabs another $1 on every $2 call; get drunk and it's another $43 or $72 of every $100 that gets shipped off to the state, depending on whether it's Coors or Wild Turkey.

For the average family, all these taxes now eat up 38 percent of gross income, a higher rate of taxation than ever before in the peacetime history of the United States. By comparison, the typical two-income family in the mid-1950s paid 28 percent of their income for taxes. We're now at the absurd point where the typical family works until noon of every working day to satisfy the taxman, paying more in taxes than they spend for food, clothing and housing combined.

Today, with 480 different tax forms, 17,000 pages of laws and regulations and a federal tax code that's over 7 million words (compared to 773,000 words in the Holy Bible, both Testaments), nearly 60 percent of Americans are paying a professional to help them negotiate the tax maze. Each year, the IRS sends out 8 billion pages of forms and instructions, enough paper to stretch 28 times around the earth. To conform with this federal Rube Goldberg tax code, Americans are spending 5.4 billion hours and $200 billion a year just in compliance costs, not counting the taxes paid, i.e., more time and money than it takes to produce every car, truck and van each year in the United States.

When the federal income tax was launched back in 1913, the tax was levied on only the super-wealthy, the richest one-half of 1 percent of the population, with a top tax rate of only 7 percent. Today, of course, the fears of the early opponents of the tax have been more than fully realized. By the end of Herbert Hoover's term, the top rate had jumped to 60 percent. By the time Franklin D. Roosevelt was done, the top rate was over 90 percent and the tax had been dramatically expanded to seize the incomes of the middle class for the first time. In 1913, the average family had to work until January 30 before earning enough to satisfy the taxman at all levels. This year, the average American family will work all the way through until May 12 in order to earn enough to pay their federal, state and local tax bills.

"Compare this to the plight of medieval serfs," says economist Daniel J. Mitchell. "They only had to give the lord of the manor a third of their output and they were considered slaves. So what does that make us?"