Suppose There Were Food Insurance 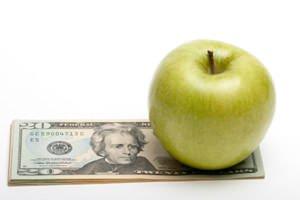 Sound like a good idea? Perhaps, but what do you suppose would happen if we had this kind of food insurance?

One thing we should expect is that there would be a general increase in food consumption, with a particular increase in more-expensive foods. As of today, who can afford a Kobe porterhouse steak with white truffles and saffron, La Bonnotte potatoes and Almas Iranian caviar on the side, a Perrier Jouet Belle Epoque Blanc de Blanc to wash it down with, and a Chocopologie by Knipschildt and Kopi Luwak coffee for dessert? But if you're paying the same whether you get this or a hamburger with fries and a soft drink, why not give the steak dinner a try?

As more expensive foodstuffs become popular, cheaper food will become repackaged and given higher prices. Which would you pay more for: a can of green beans, or a can of hand-picked, hand-selected haricots verts? The French term for "green beans" just makes you want to spend a few dollars more on it, doesn't it?

Thus, consumers will drive up the overall cost of food. Indeed, insurance or not, it is always the consumer who is responsible for upward pressure on prices. This is kept in check by the fact that consumers have to spend their own, limited funds. Remove that check, and the check on prices will be removed as well.

Naturally, farmers will begin to make huge profits from this increased demand. There will be an expansion of the agricultural sector. More exotic foods will be introduced, and well-known food will, again, be repackaged and sold as more exotic in order to compete.

Since demagogues are always on the lookout for situations to exploit, farmers would then be cast as villains, unfairly profiting off the consumer. People do have to eat, after all. How can one profit off something people need to survive? One could expect several decades of demand that the government do something about rising food prices.

In the meantime, insurance companies will begin trying to figure out how to cut costs. Premiums will go up, making it harder for poorer people to afford food insurance. The government will likely step in to offer FoodCare and FoodAid for the elderly and the poor. Grocery stores will build up huge bureaucracies to deal with the private and government insurance, driving up prices still further as they cover those employees' wages.

"Rising prices are kept in check by the fact that consumers have to spend their own, limited funds. Remove that check, and the check on prices will be removed as well."

Both private and government insurance will try rationing, negotiating prices with stores, and dictating what stores consumers can go to and what those consumers can buy. Demagogues will start complaining about the insurance companies, how they are charging high premiums but not allowing consumers to get what they want.

Eventually, people will begin to think that it's just awful that anyone has to pay for their own groceries at all. Stores won't display their prices, and store managers will act offended if you even ask about cost. And as people pay more to the insurance companies while getting less and less — people will of course have forgotten what it was like before insurance, when food was cheap and abundant — they will demand that someone do something about it.

And someone will. Regulations on agriculture, grocery stores, and insurance companies will increase, typically exacerbating problems in such a way that the companies will further be blamed for continued problems. The same problems will be used to justify more control over each industry. Finally, socialized food will be proposed.

With socialized food production and distribution come long food lines and limited rations among limited choices. (That is, when there's even food available.)

Don't think this could happen? All we need is a wartime excuse to cap wages on the average worker, giving employers an incentive to come up with nonsalary compensations — such as insurance — to attract workers. Something like the incentives adopted during the wage controls imposed during World War II.

Still think it couldn't happen? Change "food" into "healthcare," "grocery stores" into "hospitals," and "farms" into "pharmaceutical companies," and the above narrative can explain why the healthcare industry is in the situation it is in — and why we have moved more and more toward a socialized healthcare system in this country.

The bottom line here is that insurance of this kind — as opposed to catastrophic insurance like car insurance, which pays for accidents and not for oil changes and general repairs — creates moral hazard. Prices help provide accurate information, but when you are insulated from the real costs of something, you receive bad information about that product — and no one can make good decisions with bad information.

The less expensive something is, the more we are likely to consume. For example, my wife tells me she once had great insurance — a ten-dollar copay for anything. So she went to the doctor over the tiniest sniffle. Today she is a public school teacher, and as such her insurance is nowhere near as generous, so seasonal colds are waited out and treated with over-the-counter medicines that are cheaper (and work just as well).

I have no insurance, so I don't go to the doctor at all. Of course, if the US healthcare-insurance model had not been driving up prices for the better part of a century, I could afford to see the doctor anyway. But don't worry about me. The current federal health-insurance legislation will soon force me to buy insurance even though I can't afford it — and I, as well as those like me, will contribute to the next mortgage crisis when we are forced by law to buy insurance rather than choose, as I have done, to pay my mortgage instead.