Subway Tax in the Rancid Apple 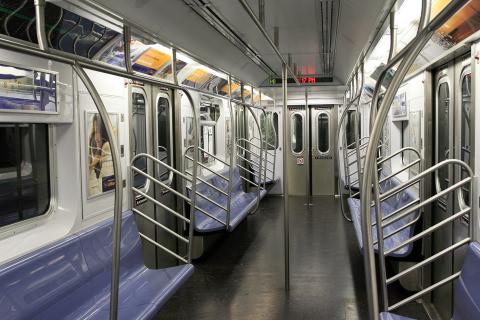 Last year the New York City Subway system carried 1.41 billion passengers. In 1947, the historic high point of ridership, the system carried 2.02 billion. That means the latest numbers constitute an incredible falloff of some 30% in a city whose population has stayed about the same over the past 60 years.

This is a remarkable vote of No Confidence in the system. Yet the subways, citizens are constantly told in breathless radio ads, that they finance, are wonderful. Now this disastrous government run system—which has alienated so many New Yorkers since private subway management was shown the door by the goo-goo socialists of the 1940s—is about to do something, once again, it never let private subway management do: Raise fares by an obscene amount, an amount that, if any private concern tried it, would have our career pols baying from the rooftops about the avariciousness of the private sector.

Yet what can one say about this system with its huge problems, whose defenders now say it should be granted a 33% fare (tax!) increase? The fare, after a series of perfunctory public hearings that most people will not attend because they are too busy trying to earn a living to pay New York's huge tax bill, will be hiked from $1.50 to $2. There will likely be few objections, even though millions of New Yorkers hate the terrible trains, bad service and broken promises of this pathetic system.

One could write a book the length of War and Peace

But such is the incompetence and the lack of accountability and wastefulness of the authority, that the MTA, which is charged with running the entire public transportation system in the New York City region, has already had problems with the train to the airport and yet no passenger has ridden the line. On a trial run, a motorman tragically died in a crash. (The MTA, by the way, maintains, at taxpayer expense, some of the most expensive digs in town at 330 Madison Ave).

The crash is nothing unusual. The subway system is in such a state of bad repair that several track workers have recently died in avoidable accidents. By the way, the tracks are so bad that there are hundreds of places in the system where trains must go slow.

The express service on the E and F trains under Queens Blvd—one of the busiest parts of the system—is significantly slower than it was 30 years ago because of bad tracks and an ancient signaling system as well as assorted other woes that it would take a Tolstoy to chronicle. A childhood buddy of mine, who is a motorman, told me of these problems when I asked him why the trip to Manhattan appeared to take longer than when I used to take the trains to Manhattan in my adolescence.

Still, our socialist pols and New York's left-wing media generally don't go in much for history or investigations of the government until the offenders are practically taking the last piece of taxpayer silverware out the backdoor. They don't make a big thing about these disasters or offer any hard questions over why this system loses billions of dollars. And we never, never, here in the Peoples Republic, ever mention that naughty word—put your hands over your eyes and ears—privatization.

But you know that if this were a private system pulling these scams, the politicos would be falling all over one another to indict the "greedy" owners of capital. Yet isn't a 33% increase "greedy?" And since the government bought out the last vestiges of private management in 1940, the fare has risen 3,900% or $1.95. I speak of a fare that is about to go to $2 in a system that deteriorates every year. As a lifetime rider of government subways, I, and my fellow victims, live by an iron rule of this system. The faster the fare is raised, the quicker the service heads south.

There was once, primarily under private management, the famous nickel fare. This was a fare that venal pols like Jimmy Walker—a former state Senator and later mayor who skipped the country for a while after the scandals of his administration—never allowed the private sector to raise over 40 years.

Imagine if one had a business and set a price. Over time one's costs go up. One must raise prices to show a profit. But one is never able to raise prices as one wants because the government stops you (Sounds like the history of American railroads that went bankrupt). Or imagine one's salary never goes up year after year. Would a worker stay on that job? Given the inherent inflation in our system thanks to our central bank, a worker or a business will be subjected to a process of property confiscation over the years. One is forced to provide a service that makes less and less money or eventually runs in the red.

That is what happened to private management of the New York City subways. In the beginning, at the start of the 20th century, the nickel fare was just fine. This was the golden era of the subways, which were primarily built with private funds. A friend of public ownership, Brian J. Cudahy, in his book "Under the Sidewalks of New York, would reluctantly concede that without private money the subways "would not have been possible."

This was the era—roughly from the turn of the century to 1940—when people actually came from around the world to ride the subways. Even an enemy of private ownership, Robert Caro, would write in "Power Broker," of this era, "so superbly had it (the subways) been designed that it took decades to break down."

Yet the breakdown was coming. The government was about to get its grimy hands on the trains. And, as with just about everything that the incompetent fools of lower Manhattan (where our ruling class rub their tummies in glee and pronounce their diktats) get their hands on, it was run into the ground. Although the coming subway disaster wasn't apparent in the 1940s, when reformers whooped up public ownership of the system as the transportation equivalent of the Blessed Trinity.

Here's the Father, the Son and the Holy Ghost: Government ownership would result in economies of scale. It would mean labor peace because subway workers would be barred from striking, according to LaGuardia. It would mean that the nickel fare would be protected from those rapacious private subway owners. All these fabulous promises were made by our pols, men and women we elected and re-elected.

Maybe we Americans should go a little easier on ramming democracy down other peoples' throats.

Today we see the fruits of the reformers and their socialist offspring who continue to run the Peoples Republic of New York. Their religion has been pricey stuff for the average New Yorker, who already struggles with high costs, who lives in a city that a decade ago "Money Magazine" called "tax hell." Since the system is owned by the government, and since the government is supposed to be us, then any fare hike constitutes still another tax increase. A buck and a half just isn't enough for these swine who rule us.