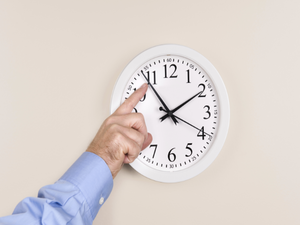 We all know about Milton Friedman’s money helicopter idiom and how President Obama’s architect in chief of Quantitative Easing used it to justify his “Great Monetary Experiment.” Less well known is Friedman’s idiom about daylight saving time, how he used this to illustrate the case for flexible exchange rates, and how it is now apparently justifying the plunge of money market rates in Europe to sub-zero levels.

Let’s go to the original quote in The Case for Flexible Exchange Rates:

The argument for a flexible exchange rate is, strange to say, very nearly identical with the argument for daylight saving time. Isn’t it absurd to change the clock in summer when exactly the same result could be achieved by having each individual change his habits? All that is required is that everyone decide to come to his office an hour earlier, have lunch an hour earlier etc. etc. But obviously it is much simpler to change the clock that guides all than to have each individual separately change his pattern of reaction to the clock, even though all want to do so. The situation is exactly the same in the exchange market. It is far simpler to allow one price to change — namely the price of foreign exchange — than to rely upon changes in the multitude of prices that together constitute the internal price structure.

What Friedman failed to mention or foresee was that once the US moved into “daylight saving” and devalued the dollar in the early 1970s, there has never been a return to “normal” time. The Federal Reserve became free from any external constraint, whether in the form of gold convertibility, or a fixed rate against a relatively hard money (which the Deutsche mark was in the early 70s). So, the Fed unleashed easy money on such a scale as to spread goods inflation and asset price inflation around the globe.

Today, daylight saving time in the form of the central bank — in this case the European Central Bank — sending interest rates below zero has created a similar hazard. The advocates of this policy point out that it is more “efficient” to introduce negative rates than have many wages and prices follow a pro-cyclical path such as would occur in principle under monetary orthodoxy. They also hypothesize about the frictional costs avoided by not allowing nominal wages and prices to fall from bubble levels.

Indeed under a regime of monetary stability — in contrast to the present inflation-targeting by deflation-phobic central banks — prices, on average, would fall to a below-normal level in the weak phase of the business cycle. Then, expectations of a subsequent climb during the expansion phase ahead would stimulate business and household spending in the present with nominal interest rates still at significantly positive levels.

But why endure all the frictional costs of wage and price cuts when a simple change of the clock to daylight saving — in this case, negative rates — could achieve the same result? In the contemporary European context, daylight saving means (according to its advocates) the avoidance of painful decline of prices and wages in Spain or Italy, which in many cases soared during the construction and real estate booms of the 2000s.

Why not instead simply drive rates below zero and power a construction and consumer-spending boom in Germany which would lift all boats in Europe’s periphery? And presto, the devaluation of the euro means also Friedmanite daylight saving time in the currency market, with all Europe’s exporters set to gain!

Britain’s famous financial commentator of the mid-nineteenth century, Walter Bagehot, had the answer when he wrote “John Bull will stand for many things but he will not stand for 2 percent interest.” As AEI scholar Alex Pollock points out, Bagehot meant that sub-2 percent rates would drive the British investor into a speculative frenzy with fatal economic consequences. Fortunately, at that time, strong demand for gold coin and a strong pro-cyclical pattern of wages and prices meant that money rates under the gold standard never fell below 2 percent in London.

What would Bagehot have made of today’s sub-zero rates? Well he would surely have predicted the speculative fantasies these have created in the minds of investors desperate for yield amidst an interest- income famine. The most vivid example of this may be 10-year French government bond yields at 0.65 percent. Not far behind is the Italian and Spanish government raising 10-year funds at around 1.30 percent.

Why is this financial version of daylight saving time having such a powerful effect in unleashing irrational forces upon global financial markets? The source of the problem is not that interest rates have been negative in real terms for some time.

After all, even under a hypothetical regime of monetary stability or in the actual history of the gold standard, expectations of a rise in prices from their recession lows could mean that real interest rates would be negative for some time. Yet these naturally-occurring negative real rates, accompanied by nominal rates which are low but still significantly positive, do not by themselves stimulate market irrationality.

On the Other Hand: When Central Banks Cause Negative Rates

Friedmanite daylight saving time is different in at least two respects. First, there is the scary psychological effect of sub-zero nominal interest rates (the scare is wholly rational given the history of monetary experimentation). Second, the holders of money and short-maturity bonds have not had the opportunity to make real gains from a fall in prices during the period of severe recession just before the negative real rates set in. Indeed if the inflation-targeting central bank is successful, prices rise throughout the entire cycle.

It is this cushion formed from real gains on monetary assets during the severe recession phase when prices fall to a low level which helps to prevent investors under a stable money regime from panicking into irrationality in response to negative real rates. Under such a regime in Europe, there would have been a decline of many wages and prices during the recent business cycle downturn.

With the central-bank having stepped in to prevent deflation throughout the cycle, holders of monetary assets in Europe now enter daylight saving time with no such cushion. And there is no finishing date in view. Most likely the European Central Bank will extend and expand its negative interest rate experiment.

Perhaps a strong economic upturn ahead or even an economic miracle (meaning an autonomous sustained strong rise in productivity growth) will force the European Central Bank to end daylight saving time. But there is the danger that the end — or the anticipated end — could bring a steep fall of speculative temperatures across a wide range of markets now enjoying the heat of asset price inflation.

It is also possible that these temperatures could start to fall without a strong upturn or miracle if anything causes the rose-colored spectacles worn by investors to fall off.