GET NEWS AND ARTICLES IN YOUR INBOXPrint
A
A
Home | Mises Library | Socialist Fire; Socialist Death 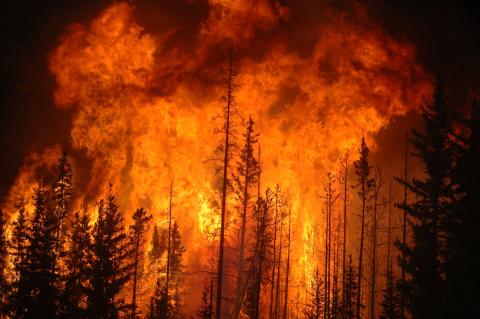 The headline in the newspaper was horrendous: "Wildfire kills 4 firefighters in N. Cascades." Pictured was Pete Soderquist, the fire management officer in charge on the Cascade Mountains in central Washington state, who explained that the deaths occurred "when what had been a five-acre fire exploded into a wall of flame that trapped the crew."

Also featured in photographs were the four firefiighters who perished: 30-year-old Tom Craven, 18-year-old Karen Fitzpatrick, 21-year-old Devin Weaver, and 19-year-old Jessica Johnson, all who lived in either Ellensburg or Yakima, Washington.

Any time there is a death of a human being, it is a tragedy (the reaction of the overpopulationists to the contrary notwithstanding). When death occurs for any reason other than old age, it is even worse. When death is not instantaneous and relatively painless, this is worse yet.

When the victims are four people in the prime of their lives, the degree of catastrophe rises even more, in view of the now never-to-be-realized potential these four youngsters might have attained had they lived.

So far, these comments are pretty conventional. Very few would demur. But there are two controversial points to be made about this tragedy, both of which may teach important lessons.

First, this calamity occurred on public property, not private. The flames that consumed these four people were in the Okanogan and Wenatchee National Forests and are believed to have been set near Thirty Mile Campground, another example of socialized land ownership. Now, I am not saying that deaths never occur on private property, nor am I maintaining that these particular occurrences necessarily would have been avoided had these lands been under private control.

The two are related, however. When a forest fire consumes private timber, there are individuals who feel it in their bank accounts; this is not the case with socialized land holdings. This means that profit-making individuals have greater incentives—by how much is an empirical matter—to take greater precautions regarding their property than their public counterparts do.

If we have learned anything from the fall of the Soviet economic system—and this is a highly debatable point—it is that things work better under private ownership. These four young people will have not died totally in vain if we use their deaths as a rallying cry for privatization of the forests. Perhaps if we succeed in this effort, other lives will be saved.

Second, there were two females amongst the death toll in this fire. I see their smiling faces shining out at me from the newspaper coverage of this event. Both young ladies were very pretty.

There was a time in our past when no such thing could have occurred: when firefighting—along with other such dangerous activities as mining, policing, soldiering, lumberjacking, deep-sea fishing, etc.—were the total province of men. Women and children died in calamities, to be sure, but only if they were caught up in them as victims. Nowadays, with our modern dispensations, we place females in the front lines.

This is no less than an abomination. Females are far more precious than males. It is not for nothing that farmers keep a few bulls and hundreds of cows. It is due to patriarchy that we owe our very existence as a species. Imagine if our cavemen ancestors had sent their women out to hunt and face the lions and tigers when they came a-calling, instead of throwing themselves at these enemies and sacrificing themselves so that mankind could persist.

After World War II, the adult male populations of Germany, Russia, and other countries that suffered the most from the fighting were virtually wiped out. Yet the next generation, thanks to the relatively few men who survived, was able to come into being as if those losses had never occurred. Imagine if this war had been fought primarily by the fairer sex; there would have been virtually no next generation. It cannot be denied that, biologically speaking, men are, in effect, expendable drones.

So let us use the unfortunate deaths of these two young girls to resolve to turn back the clock to an earlier day when women were treated the way they should be treated. Let us return from "firefighters" to "firemen." Let us no longer blithely acquiesce in the senseless slaughter of precious females. Let us, instead, place them back up on that "pedestal" from which the so-called feminist movement has thrown them.

Now, of course, in a free society, people should be able to hire whomever they choose. Females should not be prohibited from trying to enter dangerous professions. And, of course, there are certain police jobs for which only women are by nature qualified to fill—e.g., prison guard in a female facility (but not to help wipe out prostitution, which should be legalized in any case).

So this plea that we use the deaths of these two young Washington women as an inspiration for ensuring the safety of future generations cannot be done through compulsion. But at the very least, let us rescind all laws that require equal representation, or "balance." This should be done in all occupations, but first in the dangerous ones. Freedom of association is not only just, it will promote the survival of our species as well.