The Self-Defeat of the Keynesian Cross 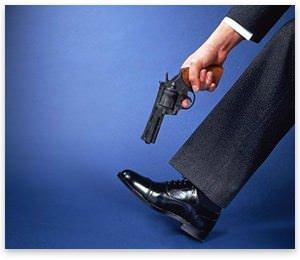 The Austrian business-cycle theory, initiated by Ludwig von Mises and further developed and elaborated by F.A. Hayek, is by many considered the cornerstone of this school of thought. However, in 1998, Paul Krugman plainly dismissed the theory as not "worthy of serious study."

More recently in his New York Times blog, Professor Krugman claimed that the Austrian business-cycle theory fails to fully explain fluctuations in output and employment between recessions and booms. From this he concludes that the theory fails to demonstrate how a business cycle can be caused by government intervention. At the same time, he interprets this as a sign of Austrians' unconscious adherence to Keynesianism in explaining the booms but not the busts. Austrian economists, says Professor Krugman, seem to be "Keynesians during booms without knowing it."

The assertions about the alleged inadequacy of the Austrian business-cycle theory have been addressed by Robert Murphy and will not be the focus of this article. Instead, I will demonstrate that the common interpretation of the theory that Krugman considers more worthy of studying seriously — J.M. Keynes' General Theory of Employment, Interest and Money — has serious logical flaws. Ironically, it turns out that these are the same flaws that Krugman attributes to the Austrian theory, namely the inability to explain continuous unemployment during a recession.

The Basics of J.M. Keynes' Theory

Men are involuntarily unemployed if, in the event of a small rise in the price of wage-goods relatively to the money-wage, both the aggregate supply of labour willing to work for the current money-wage and the aggregate demand for it at that wage would be greater than the existing volume of employment.1

Next, Keynes describes the basic elements of his theory:

This theory can be summed up in the following propositions:

These propositions were later formulated by Paul Samuelson into what is now known as the Keynesian cross model.3 This model has become one of the standard elements of undergraduate macroeconomics courses.

The next step in the application of this model generally involves assuming that propensity to consume, which is an exogenous variable, fluctuates between some minimum and maximum value. Let these values be pc1 and pc2. This is shown in figure 2.

Figure 2. Changes in the aggregate demand due to the changes in propensity to consume

This idea is graphically illustrated in figure 3. It shows cycles of price increases, output and employment loss, as the propensity to consume fluctuates over time. The periods of higher prices and output, according to this model, coincide with full employment while the periods of lower prices are accompanied by unemployment and a decrease in output.

The typical interpretation of the model is that the observed cycles in output, prices, and employment are consequences of intertemporal fluctuations in the aggregate demand, caused by the changes in the population's propensity to consume in a market not stabilized by government intervention.

The intended effect of these policies would be to reduce the aggregate demand when it is too high and increase it when it is too low. This would make the government the primary body that balances the economic activity in order to bring about full employment. This interpretation, on the surface, sounds plausible. However, when the internal logic of the model is examined, a serious error can be found. The next section elaborates on this.

N0 in figure 2 is the quantity of labor that produces the output/income φ(N0). The demand equation implies that, in equilibrium, some share of the total output, pc0, is consumed by the income earners — the employed laborers (N0) and the employers. Consequently, pc0∙φ(N0) is the aggregate (accounting) value4 of the consumption goods and services exchanged on the market.

Following this logic, the same relationship needs to hold in any other equilibrium. Thus, if there is some other equilibrium at the level of employment, N1, and another propensity to consume, pc1, the consumption, C1 = pc1∙φ(N1), is the aggregate accounting value of the consumption goods and services exchanged on the market. These are the goods and services produced by laborers, N1, and consumed by all those who earn income.

However, if pc1 is less than the propensity to consume that corresponds to full employment, there will be some unemployed labor, equal to the difference between N0 and N1. In order for this labor to be available at another point in time, when the (exogenous) propensity to consume returns back to the level needed for full employment, these unemployed laborers need to have some nonzero level of consumption while being unemployed. Let CU = e∙N1 be this minimum consumption, where e is the physical quantity of output needed to sustain the life of an unemployed person.

If, on the other hand, one assumes nonzero consumption for the unemployed that is not included in the consumption expenditure of the employed, the actual physical output available for purchase at the level of employment, N1, is less than the quantity that results in the expenditure E1. In order to arrive at the actual value of goods exchanged on the market, say φ'(N1), the amount equal to the unpaid consumption of the unemployed must be subtracted from the existing supply: φ'(N1) = φ(N1) − P∙CU, where P is the price of output.

But this lowers the aggregate quantity of the goods and services available for exchange in the market below the quantity that corresponds to φ(N1). This means that the actual supply available for exchange no longer meets the effective demand of the income earners at pc1. Thus, assuming nonzero consumption of the unemployed that is not included in the expenditure of the employed is not an equilibrium situation in the model presented above.

Thus, according to this model, in any continuous economy free of external intervention, if the initial reduction in the propensity to consume below the level that ensures full employment persists for long enough, the economy returns to equilibrium at a lower, newly established level of full employment, N1. This is shown in figure 4.

Figure 4. A true restoration of equilibrium in the Keynesian cross model

But, unlike the restoration of equilibrium where the unemployed find the yet undiscovered opportunities for employment, the true logic of the Keynesian model implies that the equilibrium is restored by the cessation of the physical existence of the unemployed (i.e., death). Any other outcome contains unresolved internal contradictions.

Contrary to the commonly used interpretation of the "Keynesian cross," continued fluctuations in output and employment cannot be produced by this model if its strict logic is coupled with the logic of human existence. In this case, the Keynesian model implies that prolonged business cycles could not persist in the absence of an intervention external to the market processes. However, for Keynes, government intervention was the cure, not the cause, of the business cycle. It then turns out that the Keynesians are Austrians during recessions "without even knowing it."

Rhetoric aside, given the inadequacies of the Keynesian paradigm, anyone interested in explaining the origins of the business cycle would benefit from seriously studying other economic theories. This is why I cannot agree with Professor Krugman's statement that the Austrian business-cycle theory is not "worthy of serious study."