GET NEWS AND ARTICLES IN YOUR INBOXPrint
A
A
Home | Mises Library | Rain, Rain, Go Away 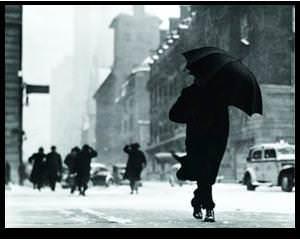 Once again, for the umpteenth time this month, I arrive at work soaking wet. Just getting from the car to the front door of the Mises Institute is like going through the rinse cycle — and umbrellas just aren't my thing. What's striking is how this weather pattern follows a year of dire warnings from government officials about the deadly drought that is destroying the region, as you can easily see from the government's own US Drought Assessment maps.

Actually, these are interesting maps. They give the impression that the whole of the nation is a parched land that vacillates between persistent drought and improving droughts. Nowhere is listed as "soaked" or "just the right amount of rain." And if you reflect on government announcements of these things, all places seem to fall into one of three categories: catastrophic flooding, catastrophic drought, or forgettable.

One suspects that these same people love droughts. Droughts give them power, not just over the aggregate use of water. They enjoy pressing people on the smallest details of life. They get to tell you that you must take short showers. They tell you that you must flush less. They impose a profound sense of guilt on your for watering the basil growing in your window box.

Droughts can turn the most innocent public employee into the moral equivalent of a Gestapo agent, issuing dictates and imposing fines, ferreting out the water thieves, all in the name of the public interest.

Droughts turn neighbor against neighbor, and force the whole of everyone into the criminal class, reduced to sneaking around at night to water tomato plants. Droughts make everyone feel dependent on the state. We must read their rules, such as, "Even-numbered houses may water their lawns from 4am to 6am, Monday, Thursday, and Sunday."

So rain, rain, go away. That's their theme.

Bureaucrat International has a common feature: loathing of "consumerism." Whereas people want to have choice over how they spend their money, bureaucrats want us to suffer constantly, and be intensely aware of what we use, trusting not the price system to determine our consumption patterns but rather obey regulations and strictures.

Note that no drought ever officially ends. The papers are packed with warnings of impending doom during the worst of it. But when the torrents of rain come — and they invariably do, eventually — there is no press release that says something along the lines of: "Praise Be to God, the drought is over. Use as much water as you are willing to pay for!"

Never, never, never. They never say this. They would rather that we carry with us some sense that the drought is never really over, since, after all, it could come again.

The core of the problem here has nothing to do with rain and changing weather patterns. The weather has in fact been changing since the dawn of time. What creates the problem is public ownership of the means of production and the utterly irrational system under which the price doesn't change regardless of availability. There is no real profitability here. Nor are there losses. So there is no economic calculation going on. Prices are determined by extra-market indicators.

Think of the difference with the market system. Every day we are enticed to consume every product you can imagine: cars, celery, computers, anything. There is constant calibrating of supply and demand. If anyone attempts to overprice a product and make profits, another entrepreneur sweeps in to offer the same for less and draw profits away. Innovation is everywhere, so that supplies are required to adopt the latest thing in order to stay afloat. No profits are permanent. They are always and everywhere threatened. These days, this happens almost overnight.

Now think of the difference with public water markets, in which the theme is always: you are using too much. Interesting isn't it? Why is this? It's because the market is not being allowed to work. This has nothing to do with the product in question. If you doubt it, make a visit to your local grocery and the bottled water section in particular. There are vast numbers of choices, with each supplier begging you to consume. But in public water markets, they demand that you conserve. State ownership and management of the means of production are the key reason. Privatize — completely privatize — the supply of water and a change would emerge overnight.

People immediately respond that this is a crazy idea. Streams, lakes, reservoirs, and water towers can't be owned privately! But is that really so? There are many cases of partial privatization on record, though as this entry suggest, the mandates are extreme. No doubt that there are efficiency gains that come with contracting out and privatized but regulated markets. The best solution is the same one that applies to all of the areas of life that are considered public goods, from trash collection and disposal to schools and defense: the government should get out of the business entirely.

Talk about opposition. Labor unions go bonkers when presented with the idea. Bureaucrats do too. Even religious groups have gotten in on the act. See, for example, the growing movement of Nuns Against Bottled Water. Presbyterians for Restoring Creation are circulating pledges for people to sign that foreswear drinking bottled water. These people claim that we shouldn't have to pay for what should be a free gift from God. But, oddly, these same people don't seem to have a problem with people's paying of the government's water bill.

Look, it's not complicated: drought is another name for shortage. Government is capable of creating a shortage in any good through bureaucratic management. Prices do not respond to supply and demand, and a lack of innovation characterizes production. We see this in schooling, mails, defense, courts, and every other area in which government enjoys a monopoly. It shouldn't surprise us that the same is true in water provision. Instead of blaming Mother Nature and the consumer, the water commissioners should look closer to home to see why everyone is required to live in fear and is reduced to doing rain dances to keep the water gods happy.