From the Publisher July–August 2022 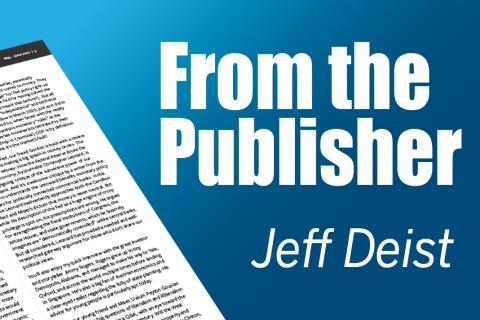 Even amidst plenty of bad news, quiet revolutions happen all around us.

No American industry is more ripe for disruption than medicine. Americans are addled; sick, overweight, mentally unwell, and dependent on too many prescription drugs. The business of “healthcare” is dominated by government—Medicare—and “private” insurance company middlemen, and it is in big trouble. Premiums and out-of-pocket costs now average $23,000 per year for a family of four. And the most expensive group of insureds, those over age sixty-five, are set to double in number by 2050.

For decades we have been told healthcare is a right, and not subject to the laws of economics. Rising prices, complexity, and insurance capture—caused by state intervention—are claimed to represent market failure. Single payer government schemes are offered as the solution, even as those systems fail disastrously in places like Canada and the UK.

Happily, the market is a powerful force and always finds a way. Heroes like Dr. G. Keith Smith of the Surgery Center of Oklahoma, along with a growing number of direct primary care doctors, are eliminating the middleman and bringing cash prices back to medicine. Where third parties destroyed market discipline and interfered with the doctor-patient relationship, the growing number of cash practices reassert both. My interview with Dr. Smith gives us a look inside this medical revolution and will leave you optimistic for the future.

What does that future look like? We cannot know exactly, but we already have the model from a time when American medicine was the envy of the world:

1. Patients pay cash for basic services. This might mean Walmart clinics for some people or exclusive concierge services at home for others, but either way, direct cash prices impose the coherent allocation of resources.

2. Insurance covers only insurable events. Serious illnesses or accidents are covered by catastrophic insurance, with high deductibles and priced according to the buyer’s actuarial reality (age, health, and habits).

3. Charitable doctors and hospitals care for the truly poor and indigent.

That simple formula is all it takes to align incentives and bring all the price competition and capital needed to revolutionize medicine. Dr. Smith and others are the entrepreneurs leading the way.

Like medicine, conservatism faces its own upheavals. Never-Trump neoconservatives and their fading outlets like National Review—call them Conservatism Inc.—are at war with a “postliberal” populist Right personified by figures like Steve Bannon. This schism has prompted several new books attempting to define conservatism for the twenty-first century, by authors like Yoram Hazony, Patrick Deneen, David French, and Matthew Continetti.

Fortunately, we have David Gordon to review them!

Continetti is the most recent entrant, with his new book The Right: The Hundred-Year War for American Conservatism. Cutting his teeth at the now defunct Weekly Standard before migrating his war cheerleading over to a comfortable sine cure at the American Enterprise (sic) Institute, he is firmly on the establishment neoconservative side of this divide. In fact, Continetti’s book makes more sense if readers consider him a progressive at his core—which is to say grandiose in his worldview and warped in his perception of what the American state can, and should, accomplish. This grandiosity apparently spills over into his perception of his own skills, as very few living writers are equipped to write an overarching history of conservatism in the US. Continetti is not one of them.

If any single issue animates Continetti’s work, it is his unflagging support for war in service of American hegemony. He gets Ludwig von Mises and the socialist calculation problem wrong, which is to say he gets the essential choice between capitalism and socialism wrong. Unsurprisingly, the ardent cold warrior Continetti dislikes Ron Paul and Murray Rothbard, viewing them as enemies whose views were correctly tossed out during the Buckleyite purges. I won’t spoil David’s great review, but in sum, Continetti writes with an authority he does not possess and a certitude he has not earned. Continetti is simply another self-serving neocon who wants to rewrite the history of American conservatism on terms favorable to his camp. As always, thank you for your support for the Mises Institute and its mission.