Power and Market: Government and the Economy

4. The Market Principle and the Hegemonic Principle

Praxeological analysis of comparative politico-economic systems can be starkly summed up in the following table: 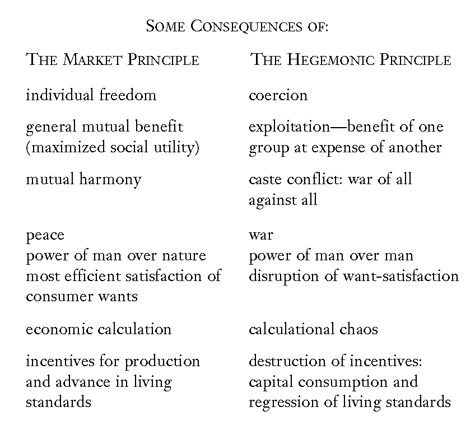 The reader will undoubtedly ask: How can all the various systems be reduced to such a simple two-valued schema? Does not this grossly distort the rich complexity of political systems? On the contrary, this dichotomy is a crucial one. No one disputes the fact that, historically, political systems have differed in degree—that they have never been pure examples of the market or of the hegemonic principle. But these mixtures can be analyzed only by breaking them down into their components, their varying blends of the two polar principles. On Crusoe's and Friday's island, there are basically two types of interpersonal relations or exchanges: the free or voluntary, and the coerced or hegemonic. There is no other type of social relation. Every time a free, peaceful unit-act of exchange occurs, the market principle has been put into operation; every time a man coerces an exchange by the threat of violence, the hegemonic principle has been put to work. All the shadings of society are mixtures of these two primary elements. The more the market principle prevails in a society, therefore, the greater will be that society's freedom and its prosperity. The more the hegemonic principle abounds, the greater will be the extent of slavery and poverty.

There is a further reason for the aptness of this polar analysis. For it is a peculiarity of hegemony that every coercive intervention in human affairs brings about further problems that call for the choice; repeal the initial intervention or add another one. It is this feature that makes any “mixed economy” inherently unstable, tending always toward one or the other polar opposite—pure freedom or total statism. It does not suffice to reply that the world has always been in the middle anyway, so why worry? The point is that no zone in the middle is stable, because of its own self-created problems (its own “inner contradictions,” as a Marxist would say). And the result of these problems is to push the society inexorably in one direction or the other. The problems, in fact, are recognized by everyone, regardless of his value system or the means he proposes for meeting the situation.

What happens if socialism is established? Stability is not reached there, either, because of the poverty, calculational chaos, etc., which socialism brings about. Socialism may continue a long time if, as under a primitive caste system, the people believe that the system is divinely ordained, or if partial and incomplete socialism in one or a few countries can rely on the foreign market for calculation. Does all this mean that the purely free economy is the only stable system? Praxeologically, yes; psychologically, the issue is in doubt. The unhampered market is free of self-created economic problems; it furnishes the greatest abundance consistent with man's command over nature at any given time. But those who yearn for power over their fellows, or who wish to plunder others, as well as those who fail to comprehend the praxeological stability of the free market, may well push the society back on the hegemonic road.

To return to the cumulative nature of intervention, we may cite as a classic example the modern American farm program. In 1929, the government began to support artificially the prices of some farm commodities above their market price. This, of course, brought about unsold surpluses of these commodities, surpluses aggravated by the fact that farmers shifted production out of other lines to enter the now guaranteed high-price fields. Thus, the consumer paid four ways: once in taxes to subsidize the farmers, a second time in the higher prices of farm products, a third time in the wasted surpluses, and a fourth time in the deprivation of forgone products in the unsupported lines of production. But the farm surplus was a problem, recognized as such by people with all manner of value systems. What to do about it? The farm program could have been repealed, but such a course would hardly have been compatible with the statist doctrines that had brought about the support program in the first place. So, the next step was to clamp maximum production controls on the farmers who produced the supported products. The controls had to be set up as quotas for each farm, grounded on production in some past base-period, which of course cast farm production in a rapidly obsolescing mold. The quota system bolstered the inefficient farmers and shackled the efficient ones. Paid, in effect, not to produce certain products (and, ironically, these have invariably been what the government considers the “essential” products), the farmers naturally shifted to producing other products. The lower prices of the nonsupported products set up the same clamor for support there. The next plan, again a consequence of statist logic at work, was to avoid these embarrassing shifts of production by creating a “soil bank,” whereby the government paid the farmer to make sure that the land remained completely idle. This policy deprived the consumers of even the substitute farm products. The result of the soil bank was readily predictable. Farmers put into the soil bank their poorest lands and tilled the remaining ones more intensively, thus greatly increasing their output on the better lands and continuing the surplus problem as much as ever. The main difference was that the farmers then received government checks for not producing anything.

The cumulative logic of intervention is demonstrated in many other areas. For instance, government subsidization of poverty increases poverty and unemployment and encourages the beneficiaries to multiply their offspring, thus further intensifying the problem that the government set out to cure. Government outlawing of narcotics addiction greatly raises the price of narcotics, driving addicts to crime to obtain the money.

There is no need to multiply examples; they can be found in all phases of government intervention. The point is that the free-market economy forms a kind of natural order, so that any interventionary disruption creates not only disorder but the necessity for repeal or for cumulative disorder in attempting to combat it. In short, Proudhon wrote wisely when he called “Liberty the Mother, not the Daughter, of Order.” Hegemonic intervention substitutes chaos for that order.

Such are the laws that praxeology presents to the human race. They are a binary set of consequences: the workings of the market principle and of the hegemonic principle. The former breeds harmony, freedom, prosperity, and order; the latter produces conflict, coercion, poverty, and chaos. Such are the consequences between which mankind must choose. In effect, it must choose between the “society of contract” and the “society of status.” At this point, the praxeologist as such retires from the scene; the citizen—the ethicist—must now choose according to the set of values or ethical principles he holds dear.

Originally copyrighted in 1970 by the Institute for Human Studies and published by Sheed Andrews and McMeel; second edition in 1977.

In 2004 Power and Market was combined with Man, Economy, and State, which had been the original intent of the author when written. Man, Economy, and State with Power and Market was published by the Mises Institute. The scholar's edition (second edition) was published in 2009 by the Mises Institute and is the source of this html book.