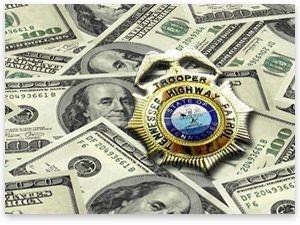 05/26/2011Robert P. Murphy
A shocking news report recently documented how Tennessee police were stopping drivers on the interstate and confiscating large amounts of cash, even if the drivers were accused of no crime. The report was particularly shocking because the special unit was operating far outside of its jurisdiction in exchange for giving a cut of the seized cash to the local government in question.

This episode is outrageous enough that any regular American can see the problem. Yet most people who see the report will probably conclude that the government "went too far" in this instance, and some reforms are needed. The real lesson here is that the War on Drugs — just like every other war waged by our politicians — doesn't solve the ostensible problem, and in fact strips away other liberties.

More generally, the report is a perfect vindication of the Rothbardian point that, in a very real sense, government is a gang of thieves writ large. Such a radical viewpoint sounds crazy to most Americans in the abstract, but when they watch the video, it's hard to deny.

The Bitter Fruits of the Drug War

From a standard libertarian perspective, the government has no business interfering in capitalist acts between consenting adults (to use Robert Nozick's felicitous phrase). This includes situations where one person wants to grow a plant, for example, and sell it to somebody else who intends to use it to induce a feeling of euphoria.

To be sure, private organizations can lay down whatever regulations they want "regulating" drug use. Airlines can still subject pilots to randomized drug tests, and schools can expel students caught smoking in the bathroom if they so choose. After all, private schools can tell students what clothes they can wear on school property, so they obviously have the right to prohibit the use of particular drugs.

Yet even if we put aside such principled opposition, it should be crystal clear by now that the War on Drugs has shredded traditional liberties. The scandal on the Tennessee interstate shown in the video above is just one example. Precisely because the War on Drugs has fostered an immense black market, the authorities can now seize large amounts of cash from anyone simply on the suspicion that the person "must be" a drug dealer (or a terrorist financier).

This is a very troubling trend. Beyond the obvious inconvenience for people who don't trust banks and want to keep a large amount of cash on hand, it also takes away one of the last escape routes from the tightening vise of financial regulations and controls. As the government's interventions in the banking system and stock market become ever more intrusive, more and more individuals will want to "opt out" by conducting their operations in cash. But now that strategy entails a huge risk, because their holdings can be seized without any formal charges if they happen to get pulled over.

Another major landmark along the road to serfdom is the huge prison infrastructure in the United States. Many Americans don't realize that the United States has the largest prison population in the world, both in absolute terms and per capita (with the possible exception of China, because their government's official figures could be bogus).

If a truly nightmarish scenario ever does develop in what was once a relatively free country, the ruling elite at that time won't have to come up with a pretext for building prisons able to house millions of dissidents. No, that option is already available, courtesy of the Drug War. Most Americans have no problem funding such construction, because they are confident that they would never be locked up.

A Rothbardian Analysis of the State

The other "radical" aspect of Rothbardian thought is that he opposed monopolies in police and judicial services. Everybody knows that in normal settings, a monopoly (enforced through the threat of violence) restricts output, reduces quality, and raises prices for the customer. Most people would see the danger and folly of giving a monopoly to, say, a particular car company, or to a single manufacturer of men's suits. Yet people think it's perfectly normal to give a monopoly to the group that has all the guns and can decide to throw people in cages for life.

A Beautiful Vision — But Is It Practical?

Some political theorists and economists defend the legitimacy of the state head-on. However, most "regular" people are not so abstract and ideological. They will usually admit that "in a perfect world," nobody would be forced to pay taxes for government services he didn't want. But alas, so the argument goes, all the wonderful benefits of open competition that work so well in computers and ice cream would not work when it comes to police and courts.

I would encourage such readers to keep an open mind and at least read some of the voluminous literature on the topic. Two baby steps are my essay on private legal systems and my pamphlet on military defense. For a deeper treatment, Hans Hoppe's essay on national defense is excellent. Finally, for those who have been intrigued and want to see a book-length description of the truly free society, I recommend Rothbard's For a New Liberty.

Murray Rothbard was a great technical economist who made many contributions to pure theory. However, many thinkers still reject his political views as being too radical and utopian. But when we come across stories such as the Tennessee police's confiscation of motorists' cash, we realize that it is faith in our present system of government that is naïve.