GET NEWS AND ARTICLES IN YOUR INBOXPrint
A
A
Home | Mises Library | Is the Need for Stimulus "Undeniable"?

Is the Need for Stimulus "Undeniable"? 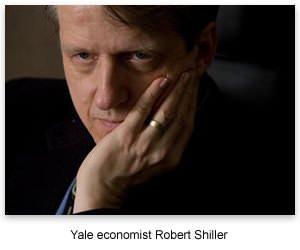 A recent article by the best-known Keynesian economist at Yale, Robert Schiller, begins this way:

[A] … fact … about our current economic situation … can no longer be denied: our economy is in desperate need of government stimulus.

Does the rest of the article provide a defense of stimulus? No. Since the need for stimulus is undeniable, there is no need to defend it. No reasonable person would disagree. Right?

Wrong. There is a problem here. Reasonable people do disagree, strongly disagree. Robert Barro, the distinguished Harvard economist, wrote an article about the same time as Schiller's explaining why neither logic nor evidence supports government stimulus programs. Barro is far from alone, among either economists or the general public.

Does Schiller really think this is undeniable because he says it is undeniable? Are we simply supposed to take this on faith? Are we yahoos if we don't? Is Robert Barro a yahoo?

Schiller is not the only Keynesian who adopts this position. Neither Keynes nor any subsequent Keynesian has ever provided a well-thought-out argument, much less real evidence, for thinking stimulus would work. Keynes said that for every $1 of stimulus, we should get as much as $12 of economic growth, and at least $3. He also said that the stimulus would pay for itself out of tax revenues. But he didn't bother to offer either logic or evidence to support these claims. They were tossed out as intuitions, really no more than "hunches," and they have remained "hunches" ever since.

Keynesians like Schiller not only take the validity of stimulus for granted; they are also maddeningly vague about how actually to implement it. When asked in early 2009 how much stimulus was needed, Schiller replied, "it must be done on a big enough scale." That was really helpful. When asked how long it would be needed, he replied "For a long time into the future" (Bloomberg, April 16, 2009). This is not the least unusual. When Christina Romer, leading Keynesian and President Obama's economic council chairman, was asked how long stimulus would be needed, she responded in identically vague terms. Not even Paul Krugman has ever been pinned down on any of this.

In his recent article, Schiller goes on to cite Keynes's argument that recessions are caused by a collapse of confidence, nothing more. This misstates Keynes. He also blamed too-high interest rates. But that is a difficult argument to make with interest rates below the rate of inflation, so it has been conveniently dropped. Nor can we just assume that recessions are just a confidence problem. The counterargument is that recessions reflect imbalances in the price system and that a failure to address these imbalances will just make things worse. Proponents of this view hold that massive money printing, driving down interest rates below inflation, stimulus spending, and other distortions of the market's own price equilibria just make things worse. Indeed these massive government interventions are what cause the serious recession in the first place.

Schiller goes on to suggest that government stimulus programs do not have to be done with borrowed money. Government can instead tax more and spend that money. This is a curious argument for several reasons. First, Schiller knows full well that all stimulus ultimately has to be paid from taxes, unless we just default on the debt. He is really just suggesting that we tax now rather than later, but characteristically does not explain why that is an improvement.

He also fails to note that Keynes did not suggest any such program. Keynes in several passages warns about the dangers of taxing employers more heavily when unemployment is high. As the supply siders have correctly noted, we can't assume that raising tax rates in a recession will actually result in more taxes being raised.

In one respect, Schiller is in full accord with Keynes. He seems to think that government will invest the assumed new tax revenue more wisely than businesses and individuals. Keynes argued in 1932 that public officials, unlike self-interested businessmen, would take "long views" and exhibit "collective wisdom." Unfortunately we cannot accept this bit of fantasy in 2011. Government spends in order to get reelected and in doing so is chiefly influenced by special interests.

This kind of crony capitalism is precisely what has gotten us into such serious trouble. More of it is the last thing we need now. Before asking us to travel further in this direction, Schiller should stop just assuming and take the trouble of offer some arguments.

This article originally ran on August 30, 2011 on AgainstCronyCapitalism.org.