The Moral Issues of Money 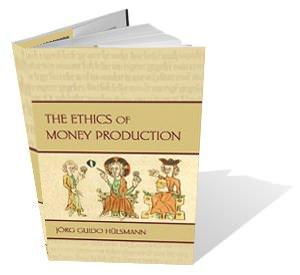 I would not have been able to write this piece without having first read Professor Jörg Guido Hülsmann's book, The Ethics of Money Production. From this book the reader can get many things, but the most important aspect is the realization that, unlike almost every other "political" issue, the subject of money — that is, what is money? where did it come from? how is it made? who controls it? — is rarely, if ever, discussed.

Professor Hülsmann phrased it this way:

Ethical problems of production have been assessed in a great number of industries, ranging from agriculture to textile manufacturing in developing countries to pharmaceuticals. Today only a few important industries have escaped such scrutiny. The most important of these is the production of money. Money is omnipresent in modern life, yet the production of money does not seem to warrant any moral assessment. (2008, p. 1)

A perfect example of this "nondiscussion" came through my pastor's sermon last weekend.

Let me first say this, though: My pastor is an awesome guy. He passionately loves God and people. He preaches from his heart — that is, with conviction — and he continually challenges me both morally and intellectually. I could not ask for a better pastor.

But on last Sunday I was asking for a better philosopher.

My problem was this: He was talking about the "ethics" of handling, spending, and earning money, and yet he never even defined what money is. It was like talking about war without mentioning weapons, or like discussing religion without uttering the word "God."

His sermon came from the book of James, chapter 5, verses 1 to 6:

Now listen, you rich people, weep and wail because of the misery that is coming on you. Your wealth has rotted, and moths have eaten your clothes. Your gold and silver are corroded. Their corrosion will testify against you and eat your flesh like fire. You have hoarded wealth in the last days. Look! The wages you failed to pay the workers who mowed your fields are crying out against you. The cries of the harvesters have reached the ears of the Lord Almighty. You have lived on earth in luxury and self-indulgence. You have fattened yourselves in the day of slaughter. You have condemned and murdered the innocent one, who was not opposing you.

Now, if you're a "rich person," this passage seems quite grim. But it's not that simple of a read. With a little analysis and clear thinking, it is evident — and my pastor pointed this out — that James isn't speaking to "the rich" per se, but to the capitalists — that is, to business owners, wealthy industrialists, and those who employ the masses. James says to them, Do not exploit.

Now my pastor did a fine job on addressing points 2, 3, and 4. He instructed us on the ethics of being good employees and workers. He talked about the ethics of running a business in a way that is fair and (economically) gracious to its employees. He even talked about the ethics of spending our money in a prudent and virtuous manner. Simply put, he made the case that money is value neutral — that is, it's not "bad" to have money — and therefore it is what you do with your money that determines if you are an ethical (business) person.

The question remains, though, what is money?

And after that — what is ethical money?

Money is the most generally accepted medium of exchange in a society. Simply put, it is that which nearly every person in society will accept in exchange for something else. In the past, commodities like tobacco, shells, cotton, and even whiskey have had their moments as money, but gold and silver have proven — over thousands of years — to be the predominant forms of money. Note, however, that money was neither invented by government nor created by social contract. It resulted from the spontaneous convergence of many individuals voluntarily choosing to peacefully transact with each other. Gold and silver was their common language (Hülsmann, p. 23).

James understood this language as well, and it is evident from his terminology in the passage.

This takes us back to the point my pastor missed — James's warning against the debasing of money. Verse 3 in the quote above reads, "Your gold and silver are corroded. Their corrosion will testify against you and eat your flesh like fire."

In regard to this verse, three things must explained: (1) Gold and silver were the money of that age. (2) Gold and silver have a variety of unique attributes which make them ideal for being money, and one of those attributes is that, so long as they are 99.9 percent pure, they never truly corrode. Last, (3) Gold and silver must be forged by fire; and when they melt, all impurities are exposed and divorced from the pure gold and silver.

Comparing James's statement to these facts, it is clear what James is addressing in verse 3: He is talking about money, and he is speaking out against the debasement of it.

As stated earlier, James takes it for granted that gold and silver are money, but he does not accept the fact that those who have money — the rich, that is — have the right to debase it by adding impurities to it.

Question: Why would the rich have wanted to add impurities (and thus risk corrosion exposure) to their gold and silver? The answer is easy. Because they gained from it. By adding cheaper metals to their gold and silver, rich people were able to generate more money for themselves — without laboring or saving for it — and then they were able to pass that "new" money off as the real thing to people who were unaware. Simply put, it was a scam.

Kings were notorious for this.

Here's an illustration: A king has 1,000 silver coins — which he confiscated from the people by taxes — but he wants 500 additional coins so he can purchase more horses for his guards, more flowers for his palace, and more food for his entourage. What should he do then? Work for it? No. That's a ridiculous idea. Only the common man works for his food. The king need only say it and it is his.

Should he tax the people even more? Probably not. The people will soon tire of continually being robbed, and, as a reaction, they will demand the king's head. So taxes won't do. "How can I get more money without having to either work for it or tax for it?" the king asks himself.

He then thinks of the most brilliant idea: he will simply create "new" money. 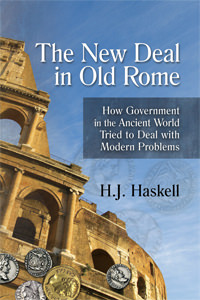 He therefore decides to take his 1,000 silver coins, melt them down, add tin to the mixture, and then pour himself 1,500 (or more) new "silver" coins. The king now has his money. He can now spend it too. He pays the sun-blistered, hard-working farmer for a month's worth of labor. He next buys some of the finest horses from a man that has slaved for years to train the animals. And to many, many others the king does the same — exchanging fake and impure "silver" coins for goods and services from honest, industrious, hard-working people.

The king defrauds them.

Now, you don't have to be a theologian to recognize that what the king has done is immoral. The king has broken not only the moral law but the laws of God. Basic moral law states that it is unjust to steal from an innocent person. The king has violated this principle. The eighth and ninth commandments have been violated as well: the king is stealing, and he is bearing false witness against the person he is buying from. Therefore, when the king knowingly exchanges his debased money with unsuspecting persons, the king steals from those people and is in violation of the moral law and the laws of God.

You don't need to be an economist, either, to see that what the king has done is naturally illogical as well. Labor is the burden of every person. In order to eat, a person must work. And not only work, a person must produce something of value that can be consumed (or used) by himself or someone else. Even the king can only eat if others labor and produce for him. Therefore, when the king makes new money for himself — and he neither labors nor saves for that money — he exploits those who have worked by exchanging his (the king's) devalued money for their valuable products, his nonlabor for their true labor, his imaginary wealth for their true wealth.

Nothing could be more unjust or cruel.

This is what James is warning against. "Your gold and silver are corroded," he writes. James's logic is this: Corrosion of gold and silver is the result of impurities, impurities are the evidence of debasement, and debasement is the practice of fraud and stealing. Therefore, James says, do not debase your money in order to pay your workers or to purchase their goods, because to do so is to commit fraud and theft against them.

Today, we don't have to worry about rich people — that is, our employers — debasing our gold and silver, because we're not paid in gold and silver anymore. No, we face a much greater concern — the government controls our money. In fact, the government controls our money in the same way our dishonest king did: it creates money out of thin air and it debases our money every time it does so.

Whenever the US government wants to wage war, expand its empire, control its schools, militarize its police, prosecute its detractors, bail out its friends, crush its enemies, praise its own exploits, or command our obedience, it need only print the money in order to do so. 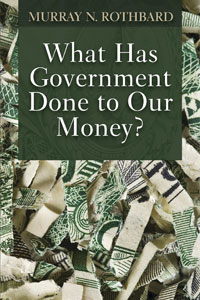 If you don't believe me, read this.

Therefore, the question remains: Why are we not talking about the ethics — the right or the wrong — of money production in America? If James condemned the business owner that debased the wages of workers, why are we not condemning a government that exploits the money of its citizens? And which violation is greater? At least the cheated worker can move onto a new employer to preserve his/her wealth and dignity. How is the citizen ever able to escape the injustice of his or her government? Such a thing is almost impossible.

Isn't this something my pastor should have talked about? Isn't it something we should all be talking about?

Gabriel M. Mueller is a recent law school graduate who is currently employed as a law clerk at a bankruptcy law firm. He resides in Tempe, Arizona.