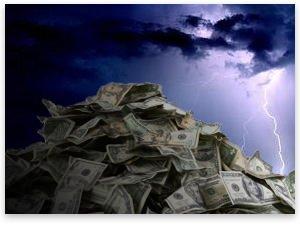 [Originally published by the Center for Vision and Values (2011). An MP3 audio file of this article, read by Keith Hocker, is available for download.]

Defenders of the Federal Reserve have been out in force recently declaring the triumph of Money Printing 2, James Grant's suggested, more truthful term for "quantitative easing." Some pundits point to an 18 percent increase in the S&P 500 since last August, when the Fed's policy was announced. They also laud a significant increase in inflation expectations. Nominal GDP is on the rise again and official unemployment is lower. All of these are seen as positive economic signs, indicating that Fed policy is working. Don't believe it.

Behind the talk is the notion that monetary spending makes the economic world go round. It does not. Increasing the money supply does not magically increase the quantity of land, labor, or capital goods available for production. Creating money out of thin air does not produce more consumer goods, and there is the rub. We cannot eat money. We cannot wear money. We cannot live in money. Even the Beatles knew that money can't buy you love.

Increasing the money stock can, however, result in higher overall prices for goods, including shares of equity stock. It should not surprise us that when the Fed increases money supply, stock prices rapidly increase. As it drives interest rates down, the Fed encourages investors to put their money anywhere they can get a better-than-average return. If this be in stock investments, so be it.

The trouble is that such inflation-fueled spending does not result in true economic prosperity in the form of more goods to satisfy our ends. It might encourage more spending, but not investment that reflects the wishes of society. Investors are encouraged to invest in industries that are too capital-intensive relative to the wishes of savers in society. Such malinvestment fuels investment bubbles.

The Federal Reserve inflated the M2 money supply by 48 percent from February 2001 through September 2008, and what does it have to show for itself? The worst economic debacle since the Great Depression. Monetary inflation via credit expansion generated malinvestment in the housing market as well as in the financial derivatives market. Distortions in investment and consumption took place until, due to shrinking capital stock being stretched in too many directions, the commercial-paper market found itself "in difficulty;" interest rates began to increase and entrepreneurs were forced to begin liquidating investments that seemed good during easy credit but were revealed to be unprofitable by real economic conditions.

"If you want to stop a fire, do not throw gasoline on it."

Additionally, high stock indices are not necessarily signs of a healthy economy. On October 9, 2007, the Dow Jones Industrial Average closed at 14,164 and the S&P 500 closed at 1,565. These were the highest they have ever been. Were they a sign the economy was strong? No.

Real GDP, likewise, hit an all-time high in October 2007 and then proceeded to contract 4.1 percent during the Great Recession. Similarly, nominal GDP was at an all-time high in July 2008 and then decreased 3.1 percent in less than a year. That monetary spending is up does not necessarily mean the economy has healed. It is just as likely that the remaining economic problems have merely been covered over with a monetary Band-Aid.

Rising inflationary expectations are not good either. In fact, they are the first step toward hyper-inflation. We should not be shocked that more people are expecting overall prices to rise. Expanding the monetary base from $1.7 billion to $1 trillion tends to do that. If people expect continual higher prices, they are likewise expecting a continual loss in the purchasing power of the dollar.

People will not want to hold dollars if they think that while they do so, the quantity of goods they can buy with their dollars is shrinking daily. Increased spending increases demand for producer and consumer goods, which raises their prices even more, fueling even more intense inflationary expectations, which encourage people to spend even faster, driving up prices even more sharply, which … you get the picture. It is a recipe for economic disaster. Ask the Zimbabweans.

If you want to stop a fire, do not throw gasoline on it. Likewise, if we want to solve an economic problem caused by monetary inflation, we should not throw more money at it. To the extent that there is any economic recovery, it is due to real savings wisely invested in productive enterprise, none of which is made possible by government spending and inflation.

What should we do then? We should stop inflating, cut government spending, and reduce government regulation of the economy. Only such a policy will restore our economic footing. Doing so will allow the natural division of labor to develop and encourage the capital accumulation and wise investment necessary for economic prosperity.

This article originally appeared on VisionAndValues.org, the Center for Vision and Values, Grove City College, April 11, 2011.